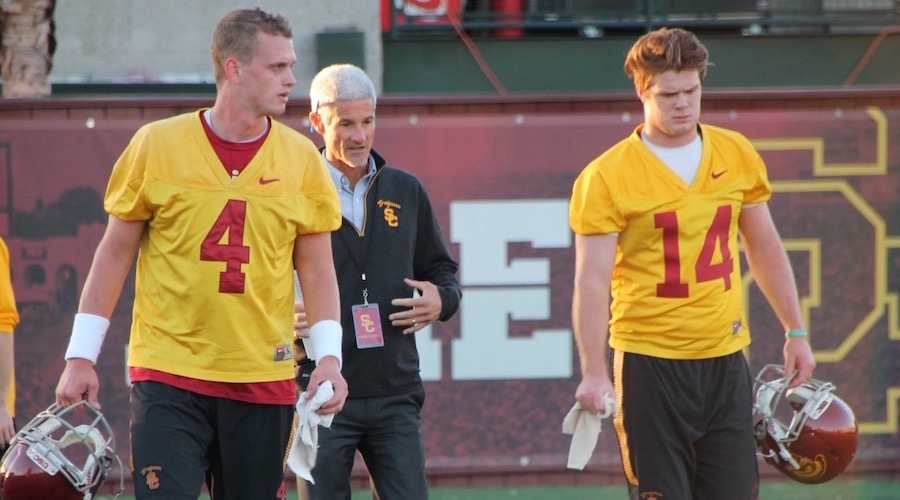 In a somewhat surprising decision, USC coach Clay Helton has elected to wait until fall camp to decide on a starting quarterback between Max Browne and Sam Darnold. Helton announced the news today after meeting with all four quarterbacks to give them his reasoning for the decision.

“There were a number of open positions on our team this spring where players performed very well, including the quarterbacks,” said Helton.  “I met with them today and told them that, based on how well they played, I have decided to continue the quarterback competition into Fall Camp.  I will wait until then to name a starter.”

There had been a lot of momentum building since the spring game for the job to go to Browne. The redshirt junior has waited his turn for three years behind Cody Kessler while throwing 19 passes in that time. Max entered spring ball this year as the starter, was designated by Helton to be “ahead” in the race after two weeks of practices, and then completed spring by hitting on 7 of 11 passes for 114 yards and three touchdowns in the Trojans spring game last Saturday. It was a solid enough effort that the pulse of the USC fans on the message board showed that the majority felt Max had done enough to earn the job now.

But it’s clear with this decision that Darnold had done enough to take the competition into camp. Sam showed a lot of playmaking ability, especially during the latter half of spring after the offense installation had taken place, and ended the spring by completing 6 of 7 passes for 63 yards and two touchdowns on Saturday in the spring game. This was Sam’s first spring ball session at USC, as opposed to Browne who was entering his fourth spring session. Most coaches will tell you that they want to name a starter at the end of spring so that the team, and the quarterback, can go through summer workouts with a clear starter in place. It’s not something that has to happen, however, and Clay Helton felt it was more important to wait and have the situation be clear in his mind at some point during fall camp.

Click here to read the press release from USC and Helton