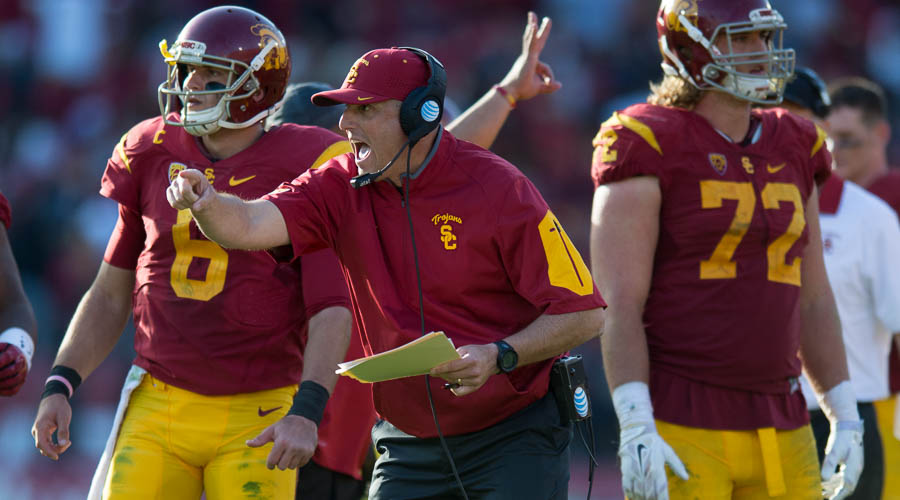 It is almost a fantasy scenario, something right out of a nearby Hollywood sound stage.

Clay Helton is like a longtime character actor who suddenly has been handed the lead role in a full-blown Spielberg epic. Instead of his own movie star trailer, he has a plush office in the glitzy, $70 million John McKay Center. Instead of his name buried in the post-picture credits, it is emblazoned in large letters on all the new cardinal and gold posters.

Helton hunkers down in the expensive leather couch located in the middle of his ridiculously spacious, new USC digs, a few steps away from the hallway outside with the 60-inch flat screen television, and smiles sheepishly, as if he can hardly believe it.

“This is like the Walt Disney World for coaches,” he says. “I feel like this is the greatest opportunity a football coach can be given. I’m here at what many consider the pinnacle of college football. What a tremendous honor. I’m truly humbled.”

He should be. This doesn’t normally happen to a blue collar coach who has spent 16 years as a relative unknown assistant. Guys like Helton get their first head coaching jobs at Montana State or Arkansas Central. You’re supposed to begin in a B-movie, not a $200 million blockbuster.

As he prepares to direct his first spring practice as Trojans’ head coach, Helton understands. This is an unpretentious, 43 year old who looks and acts 10 years older. He has about as much in common with Lane Kiffin and Steve Sarkisian, his two swaggering predecessors, as Jackie Robinson might have had with Yasiel Puig.

There is no sense of entitlement. There is no I’m-the-smartest-guy-in-the-room syndrome. The only thing he lacks more than hair is bravado.

For those in the media who are about to get better acquainted, it will be a refreshing change of pace.

But it won’t mean anything unless he wins. Helton will soon discover that along with all the fancy accoutrements come a couple of Coliseum-size stadiums full of pressure.

“Do I realize that? Not only do I understand it,” he says. “I welcome it. This place demands championships. Those of us on the coaching staff feel the same way. We have to develop the mindset to win championships.”

The details of a wild, emotional 2015 season seem like a blur now. The firing of the troubled Sarkisian, losses to Notre Dame and Oregon sandwiched between impressive victories over Utah and, most important, UCLA as the interim coach. Then, while most USC fans and boosters believed a national search was being conducted, the stunning news that Athletic Director Pat Haden had named Helton as the permanent head coach.

Helton was allowed to break the news to his players in a team meeting at the John McKay Center. When he did, the kids rushed the podium and mobbed him with congratulatory hugs and whoops of happiness.

“I’ll never forget that,” Helton says. “It only affirmed what my dad taught me. This game is about building relationships. When the kids reacted like that, it made me so proud. That’s what happens when you trust them. They trust you.”

Mention the start of spring practice, and Helton’s eyes light up. He and his coaches are just back from a two-day retreat in Indian Wells. Amid the heat and swirling winds of the desert, it was non-stop football talk interrupted only by a few hours sleep.

“The idea was to set out my goals and get everyone on the same page,” he says.

Chances are, one of his new assistants is already there. Younger brother Tyson Helton is one of the Trojans’ new offensive assistants. “It’s an absolute blast having him here,” says the head coach. “He had no choice. Big brother rules.”

So now that Helton has settled in and has his blueprint and six new assistants ready, what can we expect? What will the Helton Trojans look like once the real bullets start flying?

“We want to take advantage of all our skilled athletes,” he says, “and we want to have the ability to run the ball. We want to be able to put games away late by running the ball, the way we did against UCLA and Cal.”

If that physicality was there in the regular season, it was missing in the Holiday Bowl against Wisconsin.

“Were we what we eventually want to be in that game? Honestly, no,” Helton says. “We have to be a more physical team on offense and defense.”

What about the head coach? How will he be different than his predecessors? Whether he realizes it or not, Helton’s answers offer some interesting revelations about Lane Kiffin and Sarkisian.

“Every coach is different,” he says. “Coach Kiffin and Coach Sark were two of the most offensively brilliant minds I’ve ever been around. But I’m different. I want to manage the football team, not run the offense. I want every member of the team to feel me.

“I want to spend my time at practice on both sides of the ball, as well as on special teams. I think it’s really important that each facet of the team feels the head coach’s passion. I will focus on fundamentals and techniques, not schemes.”

Helton says the two biggest question marks heading into spring practice are at quarterback and along the defensive line. New starters will occupy all those positions.

“Obviously, Max (Browne) has a slight edge at quarterback with three years worth of knowledge and experience. But at the end of the day, it will be about who is performing best. Who is moving the ball. This place always has been about playing the best player, no matter his age.”

Helton doesn’t hide his admiration for Browne, though. “He reminds me of Peyton Manning,” he says. “He’s just a brilliant kid. I think he’s smarter than all our coaches. He has his communications degree after three years and is now starting a two-year program to get his Masters in business.”

Going into a new season without any returning defensive line regulars is scary. But Helton thinks Rasheem Green and Noah Jefferson, both of whom played important minutes a year ago, will pick up the slack. And he raves about the veteran leadership of Kenny Bigelow, who has more than enough talent to surprise people.

What the new head coach doesn’t rush to bring up is the schedule. It is brutal, especially early.

“Playing Alabama in the opener? How fun is that?” he says. “If you want to be the best, you have to play the best. We realize the challenge we have ahead.”

Something else he realizes is that USC football is for everyone connected to the university to share. He says he will open spring and fall practice to the public and welcome the old atmosphere created by a somewhat successful gentleman named Pete Carroll. And oh yeah, no more of those morning practices during the season. He wants his team to drill when it plays most of its games — in the afternoon.

Helton’s enthusiasm is infectious, and that’s a good thing. But he needs to remember the role he’s undertaking is an enormous one. In his first full season on the job, no one believes he should walk away with an Oscar.

But when you’re the head coach at USC, they certainly expect you to get nominated.