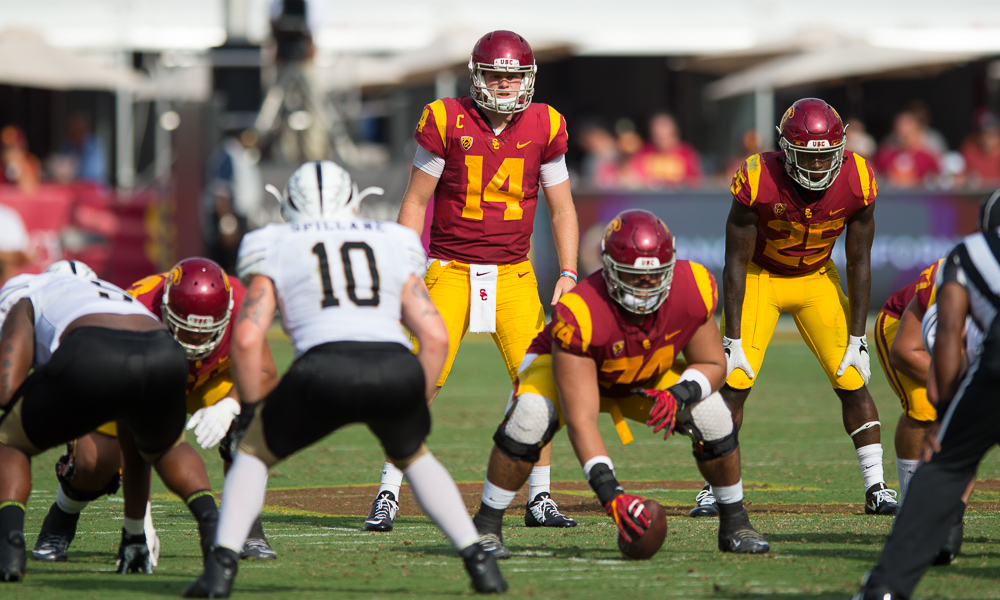 The Trojans got tested on Saturday against the Western Michigan Broncos, and while the final result was a 49-31 victory there will be plenty to review and address before the match-up next week with Stanford.

First of all, let’s give credit to Western Michigan, a team making their first trip to the Coliseum on a 98 degree day and they played tough from the start. A USC defense that had looked good in fall camp was suddenly having trouble stopping the run, to the tune of 161 rushing yards in the first half alone. Part of the problem was the absence of Cameron Smith, and he helped slow things down once he returned in the second half, but the lack of Smith doesn’t explain everything that happened early. The fact was the Broncos saw success at the line of scrimmage, led by a future NFL left tackle and a trio of good backs, and they had an identity for what they wanted to do.

“Stopping the run is something we take pride in and obviously that didn’t happen,” USC head coach Clay Helton said in his Sunday night media call. “There were missed tackles and gap assignment issues that need to get cleaned up. The missed tackles were open field, 1-on-1 opportunities and we need to get guys down. Our defensive coaches will make sure that gets addressed this week. And Western Michigan did a nice job with some of their zone blocking concepts that we hadn’t seen before.”

For the Trojans in the first half it seemed like their own offensive identity was out of synch. Some dropped passes didn’t help, a few key penalties, some errant snaps. It wasn’t anything overly bad but it also wasn’t a well-oiled machine either.

“We started off not playing our best and it became a competitive game,” Helton said.

When the second half rolled around, specifically the fourth quarter, it was a different story and it was the Trojan veterans who led the way. Helton had talked last week about his reliance on veteran players early in the season while trying to work in the younger players who hadn’t been there yet, and Saturday was as clear of an example as you could find to validate his case.

Ronald Jones was certainly a factor with his strong running (18 carries, 159 yards, 3 TD’s) including a dazzling 37-yard run in the fourth quarter to give the Trojans a lead they wouldn’t relinquish.

That Jones touchdown run was set-up by a long Sam Darnold to Deontay Burnett pass on a 3-play, 83-yard drive that regained momentum for USC after the Broncos had returned a kickoff 100-yards for a touchdown. The Darnold to Burnett chemistry was in full effect as Deontay had 7 catches for 142 yards. Sam hit on 23 of 33 passes, 289 yards, 0 TD passes, 1 TD run and 2 picks (one was a fluke). Not eye-popping numbers by Sam standards but factor in the four drops and it looks a little different.

“What I loved about Sam in this game is that he never got rattled, even with the drops he kept on throwing to the open man, he trusted his guys and ended up throwing to 10 different receivers. His poise flowed through the team, especially in the second half. As far as no touchdown passes, some days you throw, some days you run, and we had 6 rushing touchdowns, including one by Sam.”

I also thought Tyler Petite filled the void from Daniel Imatorbhebhe only being available for limited work. Petite has bulked up to 260 pounds and he had 3 catches for 24 yards, just enough to make them know a TE could still be an option. And anytime you average 6.8 yards per rush you have to like what the veteran offensive line did, especially to close the game out.

“We leaned on the run game in the second half,” Helton said. “One of the things I like about an opening game is to see the reality of where you are. We saw an offensive line that played well and perimeter blocking that was excellent.”

The return of Smith was key for the defense, as they held the Broncos to only 102 rushing yards in the second half. Smith is the the communicator for the front seven and his impact was felt as he had six tackles in the second half alone. I also thought guys like Marvell Tell, Biggie Marshall and Rasheem Green played well, all veterans.

There was one non-veteran who played a versatile role in the game as Stephen Carr had seven rushes for 62 yards and a pair of touchdowns, including a dazzling 52-yarder that helped put the game away in the fourth quarter. Carr also added three catches for 23 yards. It was the type of debut that had been much anticipated for Stephen and only adds to the issue of how the spread the carries around for a team that could need to rely on the run early in the season as a young group of receivers matures.

“Stephen was dynamic, so explosive,” Helton said. “We were able to get him 10 touches. Of course, Number 25 did pretty good too, sometimes there aren’t enough balls to go around, but what a 1-2 punch they were.”