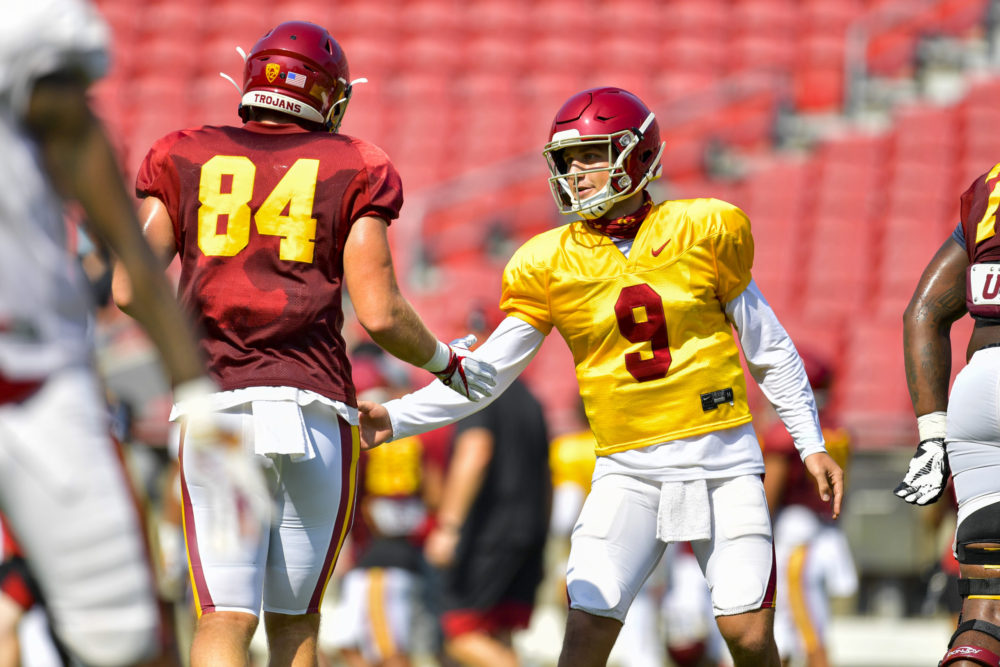 Head coach Clay Helton said that Saturday’s first scrimmage of fall camp, held in the Coliseum, produced plenty of positives, but also some things to work on as the Trojans prepare for a Nov. 7, 9 am kickoff to the 2020 season.

At this point, it’s debatable whether the most challenging opponent on Nov. 7 will be the Arizona State Sun Devils, or the 9 am kickoff that follows virtually no spring football and an offseason unlike any other for every member of the USC coaching staff and player roster.

For their part, USC is hoping the early-morning scrimmages at the Coliseum the past Saturday, as well as the next two Saturdays, will prepare them for the dramatic shift from the typical kickoff time.

“It was good to get a feeling for what this was going to feel like,” Helton said. “In this situation, especially in the first game where we have to create a feel for waking up, testing at 6 am…grabbing a breakfast, quick meeting and going, you have to bring your own energy. You have to bring your own energy to the park because you’re not going to get that from the crowd. So it was an awesome learning experience.”

Helton called it “a very important Saturday” for the team in its preparation for the season. USC was able to take part in more than 60 plays of live scrimmage situations, including getting work on offense, defense and special teams.

“It was something that I think was really needed and was a great experience for our team, and we try to create as close to what it’s going to fee like on game day,” Helton said.

USC played in an empty stadium and had ambient crowd noise piped in throughout the scrimmage. The Trojans also scrimmaged with referees for the first time this fall. While Helton called the entire day a positive, he was clear that there will be plenty of issues to address coming out of the scrimmage.

“Was it perfect? No. It was far from it,” Helton said. “But to be able to get there and get that experience at this, I thought was a positive.”

Helton said holding penalties on offense stopped a couple of drives, and while the offense can cheer big plays to wide receivers Amon-Ra St. Brown, Bru McCoy, Drake London and Tyler Vaughns, the defensive secondary will be working to figure out how to fix what went wrong there.

“We’re fortunate that we’re going to get two more opportunities to get back in there the next two Saturdays,” Helton said. “We need them, to be honest with you. This was a learning experience for us and I’m glad that it got done for our kids.”

On the positive side, USC’s offense likely goes as far as quarterback Kedon Slovis takes it, and Helton said the sophomore quarterback was terrific.

“I really thought Kedon had his best day of camp thus far,” Helton said. “I thought he had a day where he walked in there, looked extremely sharp, was decisive with his decisions, protected the ball, gave his kids opportunities to make plays down the field.”

Helton specifically mentioned two situations where Slovis showed his maturation as a quarterback. The first was backed up on his own goal line, Slovis couldn’t find a receiver and decided to throw the ball away rather than force something or take a safety. On the next play, he hit a receiver for a 25-yard gain. Slovis also did the same thing during a two-minute drill to end the first half–throwing the ball away to avoid a sack, then picking up a third-down conversion–before leading the offense into the redzone for a score.

“He did some things that you smile as a head coach,” Helton said.

“He gave you what you expect from an older leader,” Helton said of Tuipulotu. “He walked into the Coliseum with the right attitude and really had a good day.”

Tuipulotu’s presence on the defensive line is magnified with the departure of Jay Tufele, as Tuipulotu is now the clear leader of that defensive line.

Helton said the defensive line as a whole made a statement throughout the day.

“Anytime you’re putting in a new system and you literally have had about a week and a half of being able to physically implement it–I thought our defensive front did a great job,” Helton said. “[Todd Orlando], I thought did a really smart job of keeping things simple, letting the guys play, communicate together. You didn’t see a lot of busts on the defensive front.”

Helton said that during the final phase of the scrimmage, they put the ball on the 10-yard line for a four-down, first-and-goal situation and the defense stood, largely aided by the defensive line.

Helton also praised cornerback Olaijah Griffin for the energy he brought all day, in both the defensive and special teams phases of the practice.