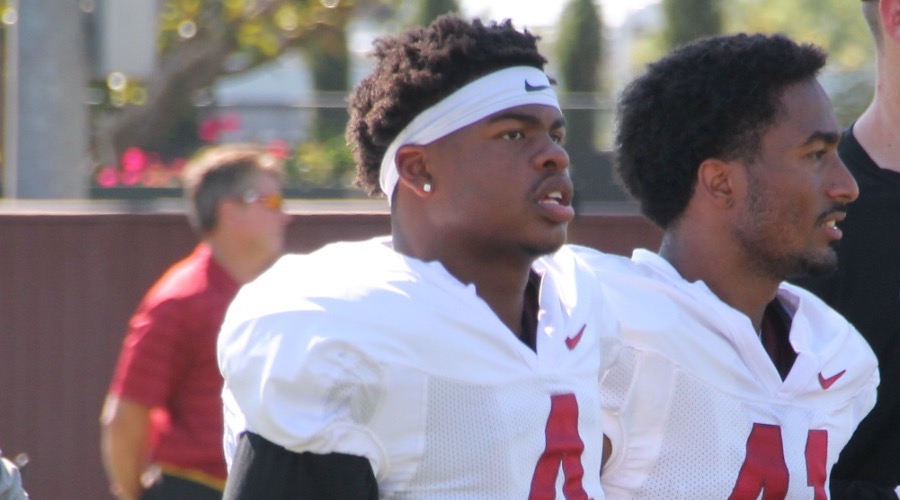 Chris Hawkins has the career stat line of a grizzled veteran.

There have been 22 starts (at three different positions) along with 146 tackles (6.5 TFL), three interceptions, four pass deflections, 2 fumble recoveries (one for a touchdown) and two forced fumbles.

That’s a pretty accomplished body of work to put out there, especially for someone came in as a corner and then was moved to safety prior to his sophomore year.

At 5-11, 192, Hawkins doesn’t possess the body frame of a typical safety, but he has built a reputation within the USC program for his film study and mental preparation to make up for a background at the position or ideal size.

“I feel like the mental side is more important than the physical because if you know what you’re doing you can play fast,” Hawkins said. “Not everybody is Adoree’ Jackson with his speed, but a good player can play great if he knows his plays and can go fast.”

An outlook like that is part of the reason why the fifth-year senior Hawkins is expected to be one of the leaders of the 2017 team, a role he gladly accepts.

“I’m looking to take a leadership role in anything that I do,” Hawkins said. “Coach Helton has expressed the need for the veterans to be leaders, he wants to see that from me and I’ll do that. I’ll just take the role day-by-day. I don’t have too much school right now so a lot of my time is going to be up here in the film room, working with the younger guys, making sure everyone knows what they are supposed to be doing. In the first spring practice today, both C.J. Pollard and Jamel Cook came up to me at different points, asking questions and I was able to help them out. The biggest thing for these young guys is to know the playbook. If you don’t know the playbook you can’t play fast.”

So what is the spring outlook for Chris, as so many seniors talk about spring as a drudgery after you have been through it so many times.

“I feel refreshed, getting back out here with a new team, new goals,” Hawkins said. “It doesn’t really feel too much different because I’ve been through a few springs now, but it’s my first spring without Mike (Hutchings) or Leon, Adoree’, so with them gone it’s a little different.”

Hawkins also repeated the party line on the opening day of spring about the need to put the Rose Bowl in the past, and to move on.

“I watched the Rose Bowl a few days after, and then started workouts and moved past it. Spring ball is about getting better.  We know what these coaches expect from us and they know what we can do, but we’ve also got a lot of guys we need to replace and you can’t do that during the season, you need to do that now in spring.”