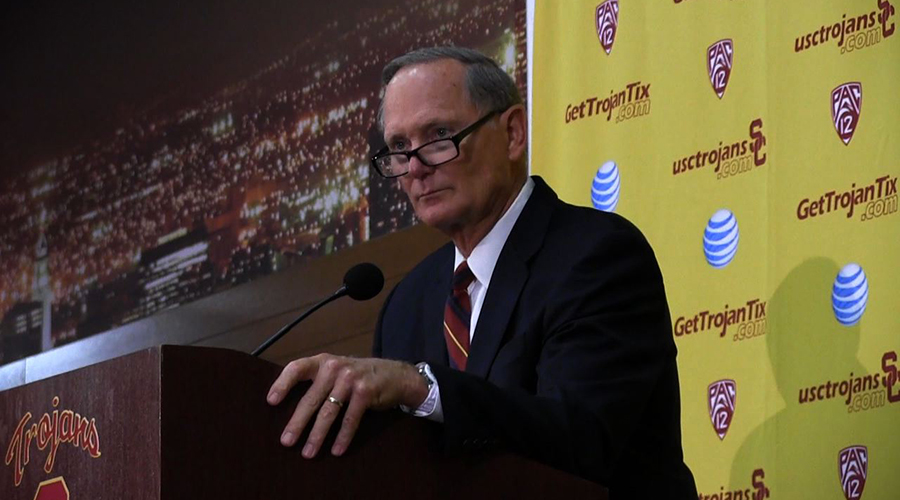 Thursday marks the final day of the Pat Haden era as athletic director at USC and it’s safe to say the exit will be quite different than the way he came in.

When Haden was hired in August 2010 it was hard to imagine a better scenario. The school had just been hit hard by NCAA sanctions, former Heisman winner Mike Garrett had been unceremoniously removed from the AD job, and the football team was transitioning from Pete Carroll to Lane Kiffin.

That was a lot of unsteadiness for a program coming off a historic run under Carroll, and who better to step in to guide things than the golden boy Haden. If anyone was going to interject reason into the USC sanctions case with the NCAA, surely it was going to be Haden. After all, he represented everything the NCAA claims they stand for, and it gave a lot of hope to Trojans to have someone as accomplished as Haden fighting for their cause.

Seriously, at the time he was hired, if there was a list of top 10 model former student-athletes there is little doubt Haden would have been on it. His reputation was as good as they came, a former star quarterback, Rhodes Scholar, successful businessman, national level broadcaster.

It didn’t take long, however, for red flags to be raised. In one of his early press conferences, Haden said the Trojans under his leadership would “win the right way”, a statement that many USC fans took to be an indictment that somehow the university hadn’t won the right way in the past. That may or may not have been Haden’s intention but those four words would stick with him throughout his tenure.

Haden also made an early statement about the “fair-minded folks” at the NCAA, a conciliatory tone for the man who needed to deal with the NCAA on behalf of the university, but it also struck USC fans the wrong way after they had felt the sting of punishing sanctions that have been exposed as anything but fair-minded.

In hindsight, it shouldn’t have been such a surprise that there were some missteps, as Haden had never really held an operational job before. His previous work had mostly been done in corporate board rooms or closing deals on the golf course, he didn’t have the nuts and bolts experience of managing a department as complex as a big-time athletics department at a school like USC.

Now there were definitely things he did know, and one of those was fundraising. Among the projects that were completed under his watch were the John McKay Center, the Heritage Hall renovation, an expanded swim stadium and new sand volleyball venue. Haden also played a role in the university taking control of the Coliseum, and it was previously announced that he would stay on after his departure as AD to be involved with the Coliseum renovation.

Another area where he shined, perhaps most importantly, was in his relationship with the USC student-athletes. It was a role very similar to a caring grandfather who wanted his grandchildren to get the best out of their college experience. Haden fought hard for extra benefits for athletes, be it extra snacks, the best medical care, or advice on how to further their career wishes. He made it a point to regularly visit practices and games for all USC sports, not just football, and believe me when I tell you the athletes in those other sports noticed that. If you want to get an idea of how the student-athletes felt about him, watch this video that was put together for Haden at the student-athlete graduation this year. At the end of the day, the university is about the students, and Haden clearly did right by them.

But as for the alumni and fans, the off-the-field issues continued. There was the decision to keep Lane Kiffin after the Sun Bowl, only to fire him on an airplane tarmac four games into the next season. There was the decision not to hire the wildly popular Ed Orgeron, and then to hire Steve Sarkisian, a move that backfired in so many ways. Not only was the hire questioned based on Sarkisian’s record at Washington, but the process of vetting the choice came under the microscope later when Sarkisian’s drinking issue was revealed. To top it off, Sarkisian is now suing the school for not handling his disability correctly when Haden fired him.

Along the way Haden was questioned for going down on the field against Stanford, he had to deal with player discipline ranging from Bryce Dixon to Josh Shaw, and he had his own health issues which led to him stepping down from the College Football Playoff committee.

But nothing (outside of his health) compared to the personal questions Haden has faced in recent weeks following a media report of his involvement with an educational foundation that he led, with issues ranging from family roles to disbursements made to USC. It was a report that didn’t reflect well on Haden and it adds another layer to the narrative of how he will be viewed in the future.

So when tomorrow comes there will be no rousing sendoff ceremony, and for the second time in a row a Trojan hero leaves the AD job with his star tarnished. When Haden walked into the job six years ago, there’s no way he imagined things ending this way.