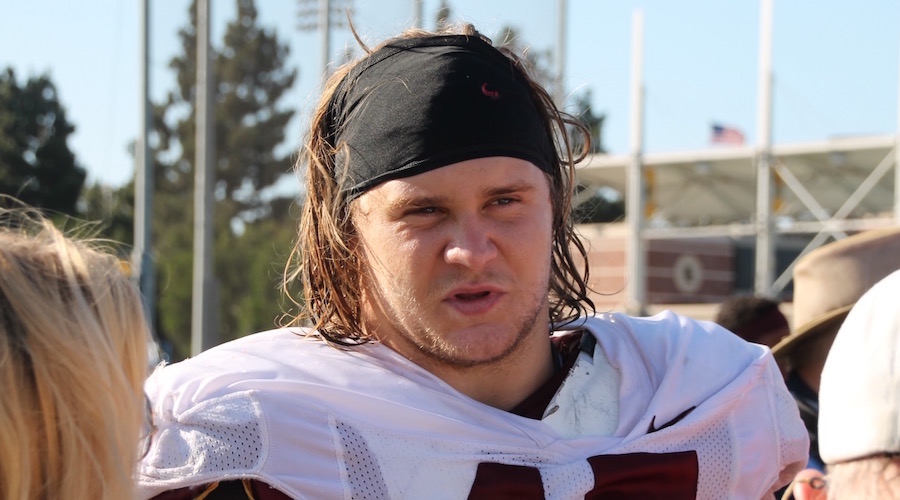 Throughout the course of USC’s current six-game winning streak, Clancy Pendergast’s defensive unit has been on a roll, improving with each game, and flat-out dominating in each of the Trojans’ past two victories.

Just one week after shutting down a potent Oregon offensive attack, the USC defense came up with an even more impressive performance against No. 4 Washington, harassing heralded Huskies quarterback Jake Browning all night long, and limiting the Pac-12’s No. 1 rushing attack (231 ypg) to a total of just 17 yards.

Spearheading the defensive revival has been the Trojans front four – a unit that was able to control the line of scrimmage last Saturday, and to provide pressure on Browning virtually entirely on their own.

“We’re just really coming together as a group,” said Predator outside linebacker Porter Gustin. “We’re starting to develop and just coming into ourselves. Everybody is playing good ball at the same time, and it’s all just working out.”

And it’s Gustin who is really turning heads these days. Compiling five tackles, two sacks and one pass break-up against Washington, the 6-foot-5, 260-pound sophomore admits that when it comes to his individual production, something has definitely clicked over the past couple of weeks, and it has everything to do with a conscious decision he made mid-way through the season to rededicate himself to becoming the best player he could possibly be.

“I just wasn’t playing how I wanted to play,” said Gustin, who has compiled 52 tackles, four sacks and a team-high 9.5 tackles-for-loss this season. “I thought I was preparing as much as I needed to, but then something wasn’t going my way, so I knew I needed to step something up.”

Gustin decided that the biggest immediate change that he could make would be to spend more of his free time in the film and meeting rooms during the week, all in an effort to gain a greater understanding of the opposition.

And he isn’t alone. After USC’s Wednesday practice session this week, player after player revealed that they’ve been doing the same. Gustin believes that it’s made a major impact on how the team has performed.

“We all started to realize that we’re not where we want to be at, so something had to change,” Gustin said. “And pretty soon you started to see guys all throughout the day going up on their own time and getting film in, and just really studying their opponent on their own. I think it’s really helped a lot.”

Always known as a tireless worker, Gustin has also continued to hone his pass-rush skills. Primarily a middle linebacker and quarterback on the high school level at Salem (Utah) Hills, he arrived at USC completely raw in the art of getting after signal-callers. With tremendous physical tools and athleticism, however, he was still able to come up with 5.5 sacks as a freshman.

Still, with a desire to become one of the top pass rushers around, he knew that he wasn’t where he needed to be.

“Looking back on last season, I knew it was something that I needed to improve on,” Gustin said. “The whole offseason I really worked on that a lot, and I think it’s starting to show up here late in the season.”

With everything coming together, both for Gustin, as well as the team as a whole, there’s certainly reason for optimism for a USC team that still has an outside chance at the Pac-12 South Division title.

But first thing’s first, and the Trojans have a pair of highly anticipated rivalry games coming up, beginning with UCLA on Saturday at the Rose Bowl.

The 4-6 Bruins come into the contest having struggled for the most part as of late, particularly on offense where their run-game ranks second-to-last nationally (87.2 ypg). In a rivalry matchup like this, however, Gustin knows that the Trojans can’t take their opponent lightly.

“It doesn’t matter what their record is or how well they’re playing, they’re going to be up for this game,” Gustin said. “It means a lot to them, and it means a lot to us, so we have to be prepared for anything.”

As for what it will take to come through with another outstanding defensive performance, Gustin believes the answer is simple – continue with the formula that has been working.

“I think that a key will be coming out and establishing that they’re not going to run the ball on us early, and making them one dimensional and getting after the quarterback,” Gustin said.

It’s safe to say that if the Trojans defense succeeds in accomplishing that goal, Gustin will have, once again, played a major role in the effort. And for every future opponent the scary thing is, by every indication, he’s only going to get better.

“Everything I’ve been doing is worth it,” Gustin said. “You’re starting to see it.”