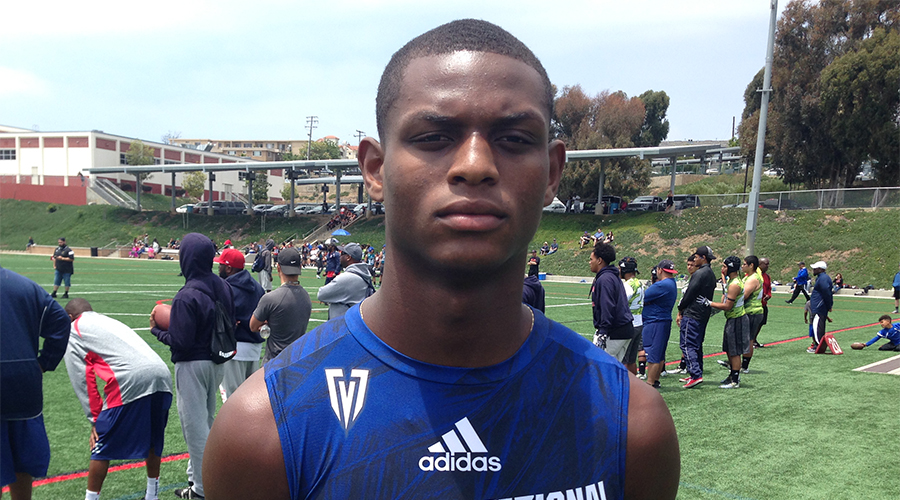 One of the fastest risers of the spring, Las Vegas (Nev.) Desert Pines receiver Randal Grimes made the trek to Redondo Beach, California this past Saturday to take part in the Adidas SoCal Invitational 7-on-7 tournament, and the USC pledge certainly didn’t disappoint. A fluid looking athlete with 6-foot-4, 210-pound size, he stood out as one of the event’s top performers, making a number of grabs all over the field.

It was the first time that the Class of 2017 star had been back to the Los Angeles area since giving a verbal commitment to the USC coaching staff prior to the Trojans’ spring game on April 16.

“I got my offer the first time I ever went there, about two or three weeks before I committed,” Grimes said. “They were trying to get me to commit on the spot back then, but I wasn’t really sure. I just took some time and really looked into everything, and I finally decided that it was the right place for me.”

Among the factors that helped seal the deal for the Trojans was the USC coaching staff – in particular, Tee Martin.

“I love the wide receivers coach – Coach Tee Martin is a great guy to me,” Grimes said. “The head coach, Clay Helton, he’s a great guy too. Coach Tee, whenever he can, mostly every day, he checks up on me. I have a good relationship with him. I really feel like USC is going to be a great place for me.”

Having grown up watching the Trojans on television, with a certain star running back serving as one of his idols, the idea of playing for USC has actually been in the back of his mind for years.

“It’s funny, because when I was younger I was smaller, so I played running back, and Reggie Bush was my guy,” Grimes said. “So, USC was something from my childhood. I really liked USC.”

Grimes has lined up all over the field in his high school career, spending time in the secondary, at linebacker, quarterback and wide receiver, but it’s at wideout where he’s really settled in over the course of the last year at Desert Pines, and that appears to be the spot where Martin and Co. envision him remaining on the next level.

“They said that they like me as a wideout, because I’ve actually gotten faster,” Grimes said. “At first they were talking about tight end and stuff like that, but then I came back and I ran a 4.59. So, they really like me at receiver now.”

While Grimes is comfortable with his decision to commit to USC, he’s still being pursued by a host of other programs, and he still plans to take all five of his official visits, with two Big Ten powers standing out as likely destinations at this point in time.

“I know two for sure – Michigan and Ohio State,” Grimes said. “Those are the only ones I really know about right now.”

As for the rest of the offseason, Grimes will be spending a majority of his time back in Las Vegas working out with his team, while also taking part in a 7-on-7 tournament later on this summer at UNLV. He also has another return-trip to USC scheduled for June to take part in the Rising Stars Camp.

“I’m just going to go out there and play hard, just like I do every time I go on the field. Catch everything and run everything down,” Grimes said. “I’m looking forward to it.”