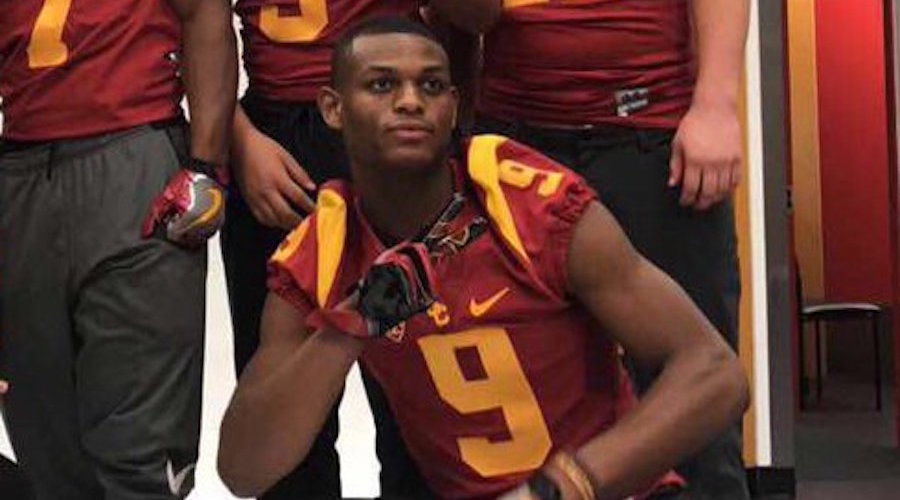 Coming off a recent visit to Nebraska, there had been some internet chatter circulating that perhaps Las Vegas (Nev.) Desert Pines wide receiver Randal Grimes wasn’t completely solid in his pledge to the Trojans.

Following his official visit to USC this past weekend, however, it’s safe to say that any and all such rumors can now be put firmly to rest.

“The visit went great,” said Grimes, who originally committed to USC last April. “I’m pretty much shutting the recruiting process down, and I’m going to USC. I know what I want to do. I’m getting ready to sign February 1st.”

While the weekend was filled with plenty of memorable moments, it’s the time that Grimes got to spend with his future teammates and coaches that left the most lasting impression.

“It was really cool meeting a bunch of new people and bonding with everybody,” said Grimes, who was hosted by freshman receiver Tyler Vaughns. “Honestly, it was my first time meeting all of the players, and they’re like a band of brothers.”

Grimes, who stands 6-foot-5 and 210 pounds, also got the opportunity to further discuss his potential future role at USC with Offensive Coordinator Tee Martin and the rest of the Trojans staff, and he definitely liked what he heard.

“They need a big receiver to come in and take over for guys like JuJu [Smith-Schuster], Darreus [Rogers], De’Quan [Hampton] and Isaac [Whitney],” Grimes said. “Losing all of those seniors and players like that, they need somebody that’s going to come in and be ready to play, so I think that’s going to be me.”

A number of photos and videos popped up on Twitter over the weekend in which  Grimes was spotted wearing a No. 9 Trojans jersey. Confirming that he’ll continue to wear that jersey in the fall, Grimes said that it holds special meaning to him not only because he’s donned that number since childhood, but also because it’s the same number that Smith-Schuster wore at USC for the last three seasons. Before that, Biletnikoff Award winner and current Jacksonville Jaguars star Marqise Lee had it.

It was Smith-Schuster, himself, who passed the number on to Grimes while the Class of 2017 star was on his visit.

“I’m honored to have the number passed down to me,” Grimes said. “JuJu literally told me when I saw him this weekend, ‘Nine is yours.’ He watched my highlights and he said, ‘I wouldn’t want anybody else taking it over.’ So, it’s going to be an honor to have that number with all of the history behind it. I feel like it’s a great legacy to keep going.”

This past weekend’s visit not only made a positive impact on Grimes and the other Trojans pledges in attendance, but also USC targets like Levi Jones, Marlon Tuipulotu and Jay Tufele.

“I feel like the guys who weren’t committed to USC, talking to them, they loved it,” Grimes said. “A lot of dudes were like, ‘Man, I want to come to USC so bad.’ We just won the Rose Bowl and next year we’re going to compete for national championship. So, why not? I feel like this visit changed a lot of peoples’ minds and made them realize where they needed to be in order to be part of greatness.”

Grimes believes that general line of thinking isn’t confined to those on campus this past weekend, and that the Trojans are poised to close strong on Signing Day.

“I think 2017 will be the class that puts the Trojans back where they want to be,” Grimes said. “We’re already there with the Rose Bowl, and they did great this past year, but I think the 2017 class will take us to new heights. We’re going to be amazing. All of the talent is ridiculous.”

With his mind firmly made up, Grimes will next head to Orlando, Florida where he will take part in the North American Championship, an all-star game set to take place this Saturday that pits a collection of standouts from the United States against a team from Canada.

Just a few days later it’s Signing Day, and then Grimes will finish the school year out at Desert Pines before arriving at USC in mid-June.

“I’m more than excited,” Grimes said. “I can’t wait to step on campus at SC and just start football and school. It’s a new chapter in life, and I can’t wait to get a national championship and help bring USC back to where they used to be.”