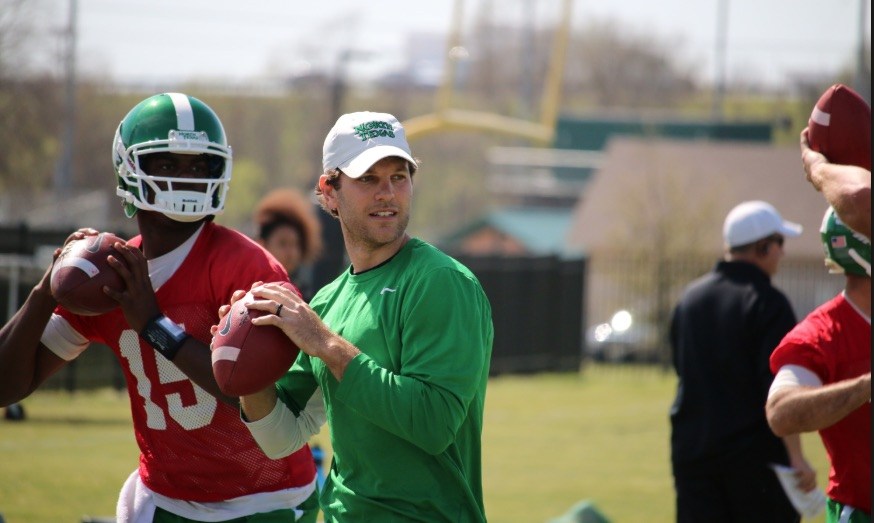 “We are very excited to welcome Graham into the Trojan Family,” said Helton.  “In our search for an offensive coordinator, we wanted someone who could take our offense to new heights and whose system fit our current personnel.  An individual who knows both the pass and run games and is an aggressive play caller on game day.  Also someone who is a great teacher and who can develop quarterbacks to their full potential.

“We have found all these characteristics in Graham.  In our study, I was so impressed with how he turned North Texas into one of the top offenses in the nation, combining an elite, highly-ranked passing game with a ground game that rushed for nearly 2,000 yards.  He also did a terrific job developing Mason Fine into one of the best quarterbacks in the nation.  We look forward to the future of our offense under Graham’s leadership.”

Harrell, 33, was a record-setting, award-winning quarterback at a Texas high school and at Texas Tech, then earned a Super Bowl ring before pursuing a coaching career.

Harrell came to UNT from Washington State, where he worked for head coach Mike Leach as the outside receivers coach in 2015 after serving as an offensive analyst in 2014.  He coached wide receivers Gabe Marks, who was a 2015 All-Pac-12 first-team selection when he led the conference in receptions and touchdown catches (school record 14) and was second in receiving yards per game, and Dom Williams, who had 73 receptions for 997 yards and 11 touchdowns. The 2015 Cougars led the nation in passing offense (389.2), won 8 games and won the Sun Bowl.

In 2008, he was an All-American first teamer, finished fourth in the Heisman Trophy voting, won the Johnny Unitas Golden Arm Award, was a finalist for the Walter Camp and Davey O’Brien Awards and was a National Football Foundation Scholar-Athlete.  His 5,111 passing yards led the nation and he threw 45 touchdowns with only 9 interceptions while completing 70.6 percent of his aerials.  Texas Tech went 11-2, including a victory over No. 1 Texas, and played in the Cotton Bowl in 2008.

As a 2006 sophomore, he threw 38 touchdowns.  He was the Insight Bowl MVP as he helped Texas Tech overcome a 31-point third quarter deficit and beat Minnesota in overtime, the largest come-from-behind win in FBS bowl history.  The Red Raiders were 8-5.

He saw limited action in 2005 as a reshirt freshman.

He earned his bachelor’s degree in history from Texas Tech in 2007.

Harrell played for the CFL’s Saskatchewan Roughriders in 2009, but spent the season on the injured list.

He then was a quality control assistant at Oklahoma State for several months in 2010, working under offensive coordinator Dana Holgorsen, before resuming his pro playing career.