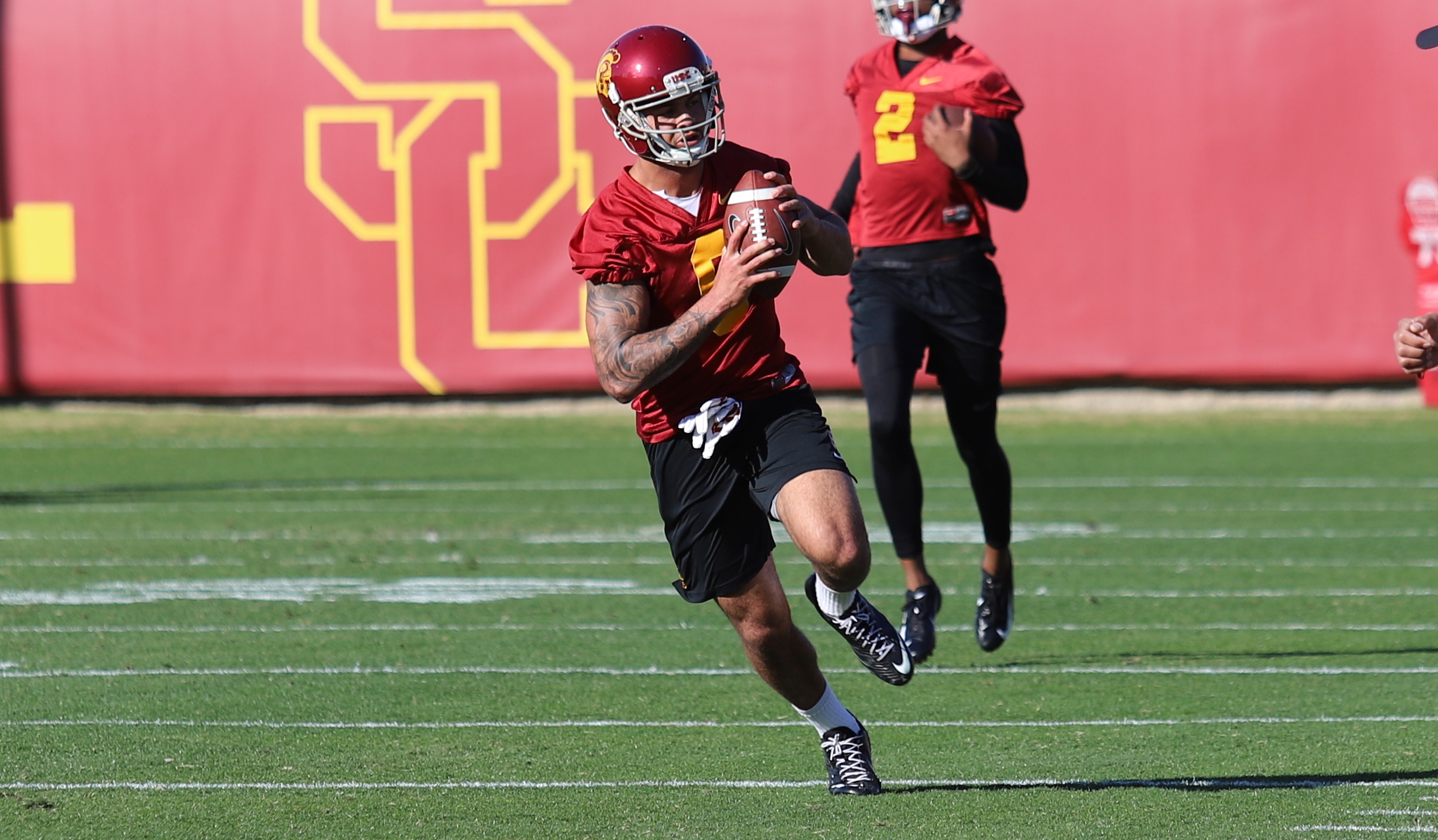 The off-season that just won’t end authored another chapter last week, but with the Trojans set to return from spring break, we can finally turn our attention back to the football field, as we review what we’ve seen through the first week, and what we’re looking for moving forward.

Head coach Clay Helton said he plans to talk to the quarterbacks at the end of spring ball to give them a clear picture of where they stand, which mean he hasn’t committed to publicly naming a starter heading out of spring. Matt Fink, JT Daniels, and Jack Sears have all performed well, seemingly adjusting to offensive coordinator Graham Harrell’s system quickly. They are all completing passes consistently and none have thrown an interception through three practices. At this point, none of the three have separated themselves and all eyes will continue to focus on this group as more is installed offensively and defensively.

This group looks as talented as we thought they could be, with Stephen Carr, Vavae Malepeai, and Markese Stepp all showing flashes. Carr had a short run that Helton praised, saying he saw Carr stick a foot in the ground and get going up the field, which showed him that his confidence is high after injuries derailed his sophomore season. Malepeai has had some nice runs, but he’s also impressed with his effort, as he will routinely finish plays by sprinting to the endzone, no matter how many yards he needs to cover. Stepp is such a naturally violent runner with great balance. He had one run where he bounced off two defenders and at one point it seemed as though his shoulder pads were just a foot or two off the ground. But the surprise on the offensive side of the ball is also in this group, as walk-on Quincy Jountti has been terrific. With so few bodies in the rotation, he has taken his reps and been impressive. I really don’t need to see anything else from the three scholarship guys, aside from staying healthy throughout spring ball.

There’s no other way to say it. The wide receivers have been terrific through one week. The depth simply isn’t there, as Randal Grimes, Josh Imatorbhebhe, Velus Jones, and Trevon Sidney could all be out on the field this spring, but instead are sitting in the transfer portal or have moved to other programs. Michael Pittman, Tyler Vaughns, Amon-Ra St. Brown, and Devon Williams have been so good through three practices. Pittman and Vaughns have taken that proverbial “next step” that we’ve seen from some select veteran wide receivers coming back for their final seasons (though Vaughns could very well be back again next year). Vaughns has caught just about everything thrown his way, and been especially impressive in his ability to go up high to bring down balls over the middle and along the sideline. Pittman has brought a real physical presence in going over and through defensive backs. And Williams has really opened some eyes early on, as he has shown flashes of potentially becoming the next great USC receiver. He’ll need to show some consistency through the remainder of spring ball, but the signs are there that this could be a nice year for him even playing alongside some other great receivers. And we’d be remiss to leave out John Jackson III and Zach Wilson. Jackson arrived ready to go and has jumped in at full speed, while Wilson is a walk-on who could take advantage of USC not having a lot of true slot receivers.

It seems like it has been a while since the tight end has been a truly featured part of the USC offense, and there are certainly some questions as to what kind of impact the position will have in Graham Harrell’s version of the Air Raid. But he did find a variety of ways to incorporate his tight ends at North Texas, and Helton has mentioned several times that he liked the one and two-tight ends sets that Harrell utilizes. Early on, the signs seem to be there that the tight ends will be called upon to produce in this offense. Josh Falo and Erik Krommenhoek have provided what you’d expect from them so far, while true freshman Jude Wolfe looks like anything but a guy who has participated in just a few spring ball sessions. He appears physically ready to go and it wouldn’t be surprising to hear his name more and more as spring ball continues.

From left to right, we’ve mostly seen Austin Jackson, Alijah Vera-Tucker, Brett Neilon, Andrew Vorhees, and Jalen McKenzie. That group has the makings of a really solid offensive line, with Justin Dedich ready to make an impact at center as well. We’ve seen the line spring a few big plays during run drills, but it remains to be seen whether they can be a physically dominating unit if called upon to convert short yardage or goal line situations. Vera-Tucker did have a notable play where he looked really good out in space while throwing a downfield block. This offensive system does take quite a bit of passing game pressure off the offensive line, as the ball comes out quickly. There was one play where the quarterback was forced to pull the ball down from his first read and the defense came up with a sack, but plays like that have been few and far between, and this is definitely not a spring ball session where the defense is wrecking things by piling up sacks and batted balls. Liam Jimmons has looked solid in his transition from the defensive line.