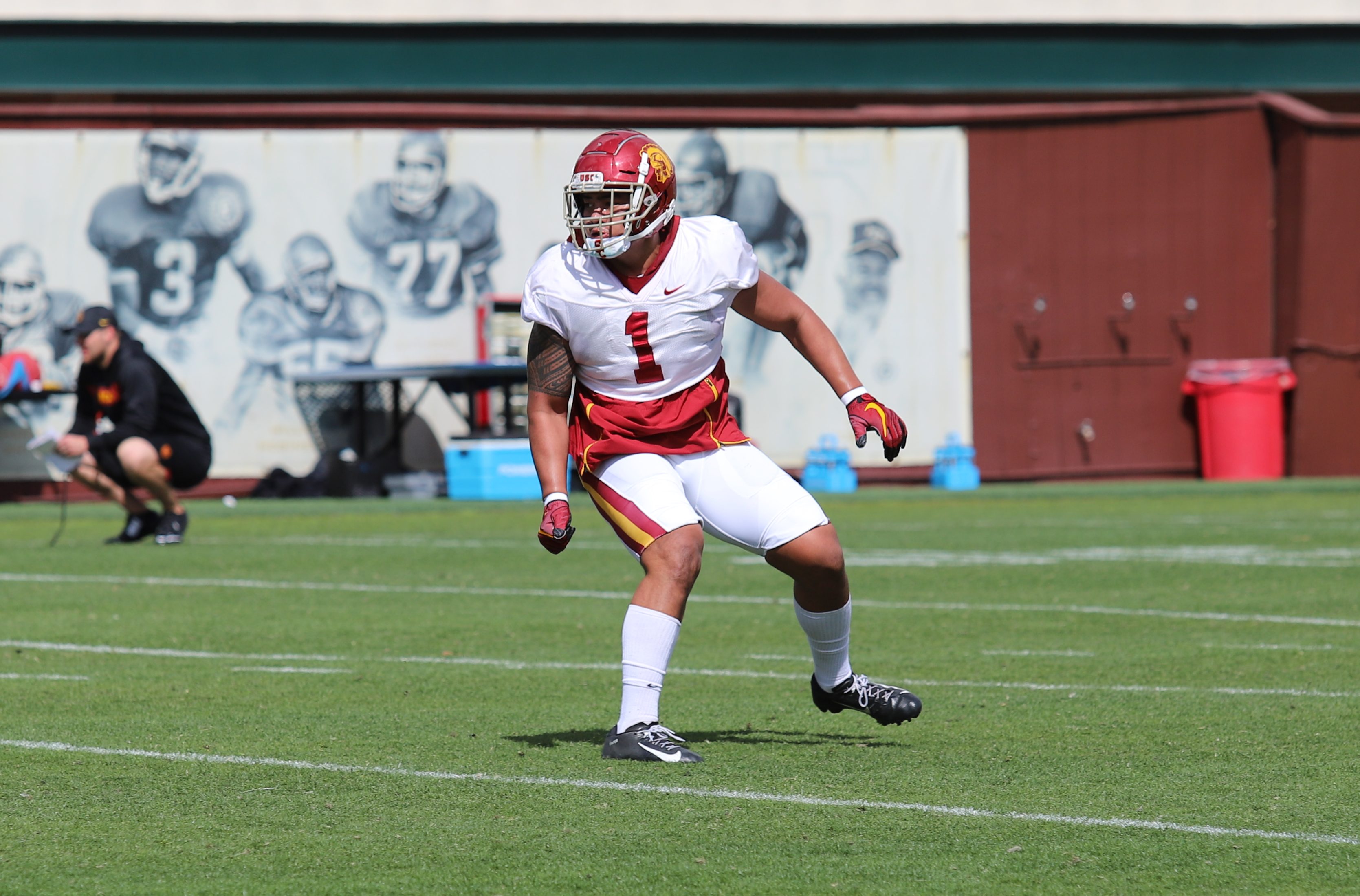 Today we’ll continue our look at the USC Trojans as they return from spring break and get back to spring ball. Yesterday we reviewed the offense, so now it’s time to look at the defense.

The defensive line feels fairly similar to the offensive line, where you have a lot of talent in your starters, but you’d like to see more after some shaky performances last year, and you’re hopeful that this spring can bring some needed depth into the picture. At this point, there’s very little to worry about with Christian Rector, Brandon Pili, Jay Tufele, and Marlon Tuipulotu. Pili has been especially vocal and involved this spring. Outside of that group, the newcomers Nick Figueroa and Drake Jackson have been impressive early. These could be a couple of players who quickly step into the rotation. Connor Murphy, Jacob Lichtenstein, and Trevor Trout are seeing time, and those two could provide some of that much-needed depth. None have jumped out yet, but it’s still early. We have yet to see Caleb Tremblay, who sat out the first week of spring ball.

There was significant news during the first practice, when John Houston and Palaie Gaoteote switched positions (Houston moving to middle linebacker, Gaoteote moving to weakside). Though in this defense, both players are asked to man the middle, and this was done in part to allow Houston, a senior, to have more control over setting up the defense and making checks and calls. It will be interesting to see if this sticks, or if it’s just part of moving people around a bit in spring to see what happens. Behind them, it has been great to see Solomon Tuliaupupu back on the field. He has made several plays in coverage that stood out. The Trojans have to find someone who can step in for Porter Gustin at outside linebacker and generate pressure on the quarterback. There haven’t been any dominant practices yet from guys like Hunter Echols, Eli’jah Winston, Juliano Falaniko, or Abdul-Malik McClain, but there has only been one practice in full pads and the talent is there for something to shake loose. One other note with this linebacker group has been true freshman Ralen Goforth staying after every practice so far to get in extra work. It’s not a surprise to see that from Goforth, and it’s something that usually tells you what kind of player he’s going to be down the line.

Getting Greg Johnson back from the transfer portal was a massive win for the defensive back group, as we’ve seen him slide right into the mix despite playing with a yellow non-contact jersey. This spring will be crucial for Isaac Taylor-Stuart to show that he can be a reliable presence this fall. I really like what we’ve seen from him so far, as he and Tyler Vaughns have had some terrific one-on-one battles through one week. Olaijah Griffin has been held out, but is always on hand and working like an extra coach out there. I’m interested to watch Chase Williams throughout the remainder of spring, both to see how he’s used and if he can potentially start to carve out a spot for himself covering the slot. True freshman Briton Allen is making a big impression early, as he has strictly played cornerback thus far. He missed last Saturday’s practice, but Clay Helton said he hopes to be back this week. He is growing up quickly due to these one-on-one matchups against USC’s big receivers and it won’t be surprising at all to see him flash a bit more during the remainder of spring ball.

It’s not great to see your potential starters in Talanoa Hufanga and Isaiah Pola-Mao both wearing yellow jerseys, but I like that even while recovering from shoulder injuries, both players are taking a ton of reps and getting used to patrolling the secondary together. Based on just the first week, whatever the line is for Hufanga this year, I’m taking the over. He has instincts and confidence that you just can’t teach. We’ve seen CJ Pollard out at practices on a scooter with his foot in a boot. It would be great to get him out on the field, but I haven’t heard a timetable for his recovery yet. To add numbers to the position, former quarterback Brandon Perdue is lining up at safety, as is Raymond Scott. We’ll see if the Scott move is a permanent one, or if he’s just the best fit of someone who could give the secondary an extra body, but I’ve been really impressed with him at safety. It’s hard to make notable improvement in just three practices, but that’s what he’s done, even coming up with an interception at one point.

Any mention of the defense has to include the punter, because he can have such an effect on field position and how much pressure the defense is under on any drive. It took about three kicks from Ben Griffiths for me to buy in. I will be floored if the punting game is not markedly improved from last season. Not only can he simply pull back and blast it, he’s also shown a tremendous ability to create backspin and repeatedly land the ball along the sideline, between about the five and 12-yard lines.