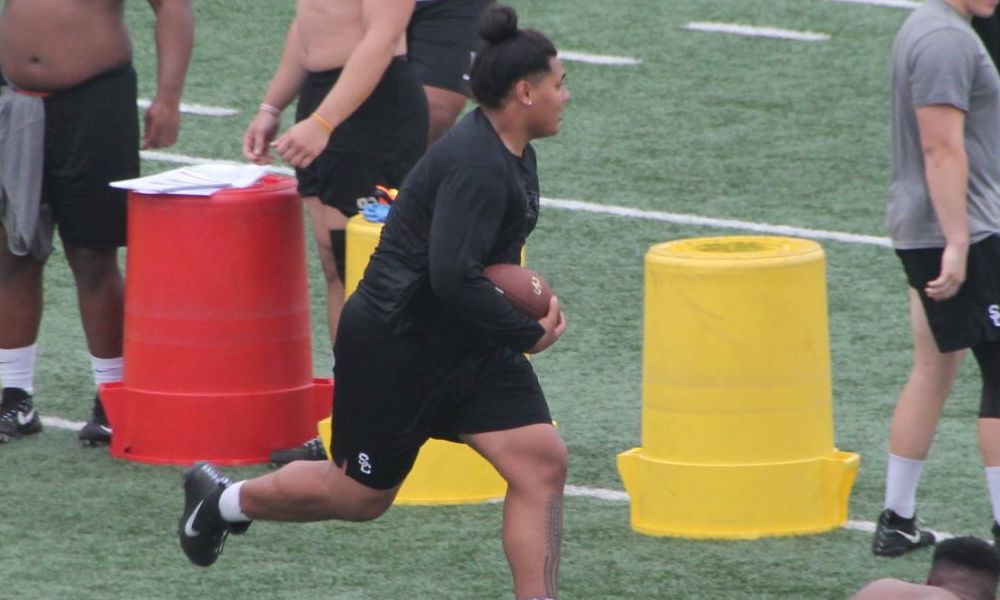 The Trojans held a PRP this morning following a team conditioning session.

After missing the PRP earlier this week Jack Sears was the first one on the field today.

During warm-ups we saw Solomon Tuliaupupu and Palaie Gaoteote as the two inside linebackers, with Cam Smith and John Houston working with them on getting lined up right. As the day went on we saw mostly young guys on defense with several of the regulars sitting out. The RB’s for the offense during the warm-ups were Brandon Pili and Jay Tufele, both of whom seemed to be having a lot of fun in the role.

Sears took the first rep of the day in 7-on-7 with a quick throw to Tyler Vaughns. Raymond Scott showed good coverage to force an incompletion headed for Tyler Petite. JT Daniels put nice touch on a pass over the outstretched arms of Bubba Bolden to Josh Imatorbhebhe, who sure can look good when he turns upfield with a head of steam. Velus Jones had no trouble getting a step toward the inside with Reuben Peters covering him for a completion and 10 yard gain. Fink tried to hit Vaughns deep but Ajene Harris got the pick. Hunter Echols had a sack on Fink.

Daniel Imatorbhebhe was in attendance again today but did not do any drills, we also saw Stephen Carr out there although he didn’t do anything beyond throwing passes with Aca’Cedric Ware on the sideline. One guy who did take part in drills with Marlon Tuipulotu, the first time we’ve seen that this summer.

Tyler Vaughns caught a screen pass and got to the corner thanks to a nice block from Vavae Malepeai. Daniels hit Michael Pittman deep against coverage from Jay Godfrey. We saw Jalen McKenzie taking reps at both RT and RG. The catch of the day came from Petite, who laid out to catch a ball near the sidelines and got a rousing cheer from the offensive players. The final play of the day came on a completion to Vaughns on a deep route, bringing more cheers from the offense.