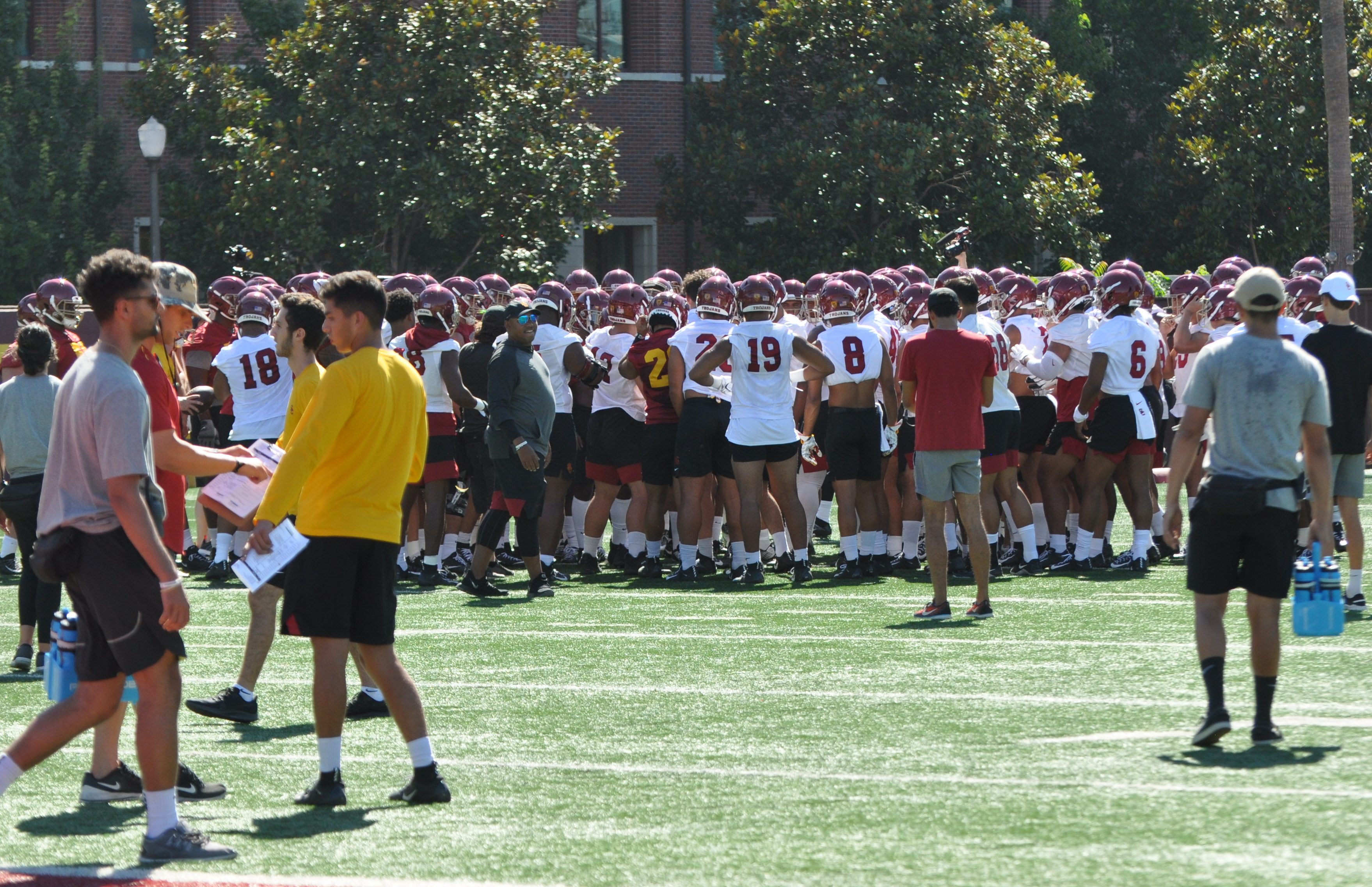 The USC Trojans kicked off 2019 fall camp with a Friday afternoon practice, and in many ways, it felt a lot like spring ball never ended.

The quarterback competition once again took center stage, although again, it feels more organic and less stressed, as each guy rotates through his portion of the practice.

The most promising aspects of Day 1, and where it was positive to see the carryover from spring, was in the intensity throughout, and the constant focus on doing all the little things right.

“I really appreciated the mindset that these kids have come in, it’s kind of a no-nonsense, get out here, and straight to business,” head coach Clay Helton said following Friday’s practice. “You can comment Double A, Aaron Ausmus, him and his staff…These guys are in shape, they’re strong. It’s neat to see them run around.”

The quarterback quartet picked up where it left off this spring, as Matt Fink, Jack Sears, JT Daniels, and Kedon Slovis took turns going with the first and second offenses throughout the day. But overall, Friday was a day for Daniels, who came out firing and never let up. He threw the ball well during one-on-ones, but really shone when it came to 11-on-11 and seven-on-seven. His first reps during full team drills came with the second team, and he hit back-to-back great passes to Jack Webster and Matthew Hocum against good coverage from defensive backs.

In seven-on-seven work, Daniels found John Jackson III on a ball down the middle where Daniels looked the safety off and found his receiver uncovered. He came back later and hit Velus Jones on a crossing route where he fit the ball perfectly in a window just past Palaie Gaoteote. But his play of the day was probably the deep ball to Michael Pittman down the sideline that went for 70 or 80 yards and a touchdown.

One day’s performance isn’t going to decide the starting quarterback, and the other quarterbacks didn’t perform poorly, but from the sideline, this appeared to be a really nice statement from Daniels to start fall camp.

Freshman wide receiver Bru McCoy was not at practice today. Helton said he is battling a fever that has lasted for some time, but that specialists now have it under control. Helton said McCoy is on antibiotics that will take some time to work, but that McCoy is checked in for camp and going through meetings at this time. He is just unable to be on the field.

Offensive tackle Austin Jackson was dressed and in attendance, but did not participate in practice. He said after practice that it would take a few weeks to ease back into things after undergoing surgery to donate bone marrow to his younger sister.

There was plenty of work during one-on-ones between wide receivers and defensive backs, and in one of the few notable differences from spring, there were bodies everywhere.

The wide receiver position benefited from the arrival of true freshmen Munir McClain and Drake London (getting Ford and McCoy into the rotation at some point will provide even more depth), while the defensive backs added Max Williams, Jayden Williams, Adonis Otey, Kaulana Makaula, and Chris Steele (with Dorian Hewett now on campus and getting on the field shortly).

There was some spirited competition between the two position groups, as the wide receivers ultimately got the better of the defensive backs, but good plays were made on both sides.

Tyler Vaughns was a particularly tough cover for defensive backs. While it’s easy to mention Michael Pittman and Amon-Ra St. Brown as the standout USC receivers, Vaughns looks as though he’s going to demand to be included in that discussion. He had impressive grabs from each of the four quarterbacks. The only knock on him today was dropping a deep ball from Sears that he had to reach for, but Vaughns would probably say he should have been able to haul in.

Devon Williams and Pittman showcased their ability to go get the ball in the air, coming down with short touchdown grabs on balls over the top of defensive backs.

There were no surprises in the starting 11 during team drills. With Austin Jackson sitting out, grad transfer Drew Richmond started at left tackle, with Jalen McKenzie staying at his right tackle spot. Alijah Vera-Tucker and Andrew Vorhees went at left and right guard, respectively, while Brett Neilon started at center with the first group. Defensively, we saw Christian Rector, Marlon Tuipulotu, and Jay Tufele up front, with Hunter Echols at outside linebacker and John Houston and Gaoteote inside. Isaac Taylor-Stuart, Greg Johnson, and Chase Williams were at cornerback, with Talanoa Hufanga and Isaiah Pola-Mao at safety.

In the second group, the offensive line from left to right was Bernard Schirmer, Jacob Daniel, Justin Dedich, Liam Jimmons, and Clayton Bradley. Defensively, it was Connor Murphy, De’jon Benton, and Nick Figueroa up front, Juliano Falaniko, Kana’i Mauga, and Jordan Iosefa at linebacker, Dominic Davis and Olaijah Griffin at corner, Raymond Scott at nickel, and C.J. Pollard and Briton Allen at safety.

While there were impressive plays from the offense, the defense put together more than its share.

Following the long Daniels to Pittman touchdown, Helton spoke to the defense and told them he appreciated them staying off the quarterback (not an easy thing to do when you can’t hit anybody and the offense is celebrating every big play). On the following play, Gaoteote came in clean and likely would have blown Daniels up for a big sack, but veered to the side. The throw was eventually batted away by Hufanga and the defense made sure the offense knew about it.

Taylor-Stuart got his hands on a Slovis pass to knock it away and it was subsequently intercepted by Gaoteote. Griffin picked off Sears twice–once on a terrific diving catch along the sideline during one-on-ones, then on a pass that was a little high but went through the receivers hands and wound up in Griffin’s (also, I might have thrown a challenge flag on the diving interception, but a great play either way).

It’s always fun to see the true freshmen during the first practice of fall. A number of them had already made their presence known in the spring, so it wasn’t surprising to see Ralen Goforth step up with a nice pass breakup today. Cornerback Max Williams rehabbed through spring ball, but was absolutely ready to go today. There might not be a freshman in this class more mentally ready to see the field early than Williams, and he showed it today by hanging with the USC receivers all practice.