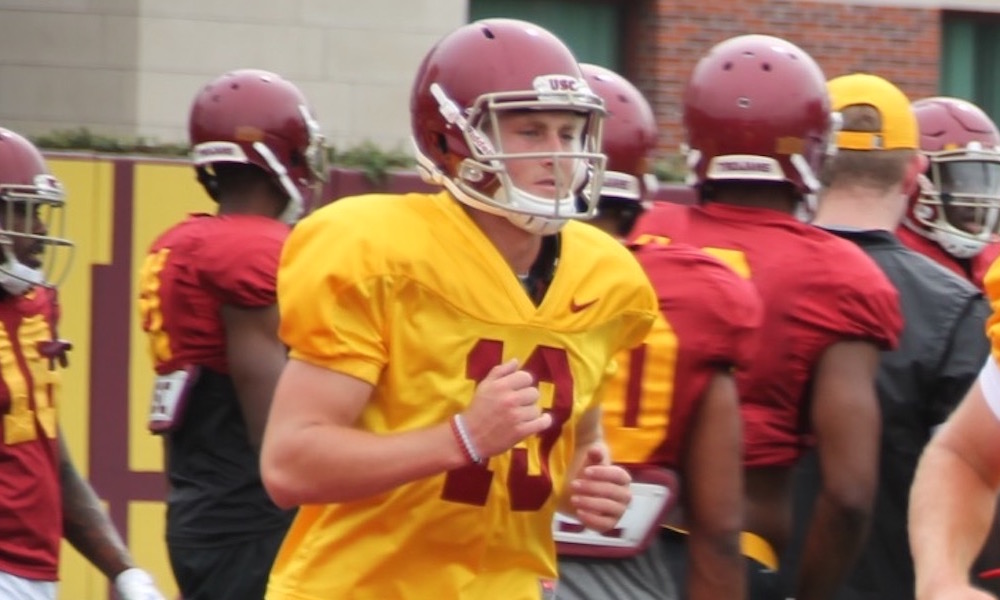 It was the first “scrimmage emphasis” practice of the spring as the Trojans were in full pads and went through about 40 plays of live tackling.

One of the biggest things to watch was the performance from the two quarterbacks, Matt Fink and Jack Sears. Helton said it was an efficient performance with good decisions but that is Helton putting a positive spin on the day. Don’t get me wrong, each guy had some good moments both running the ball and in red zone drills, but it wasn’t a case where either guy was out there showing he was ready for the job.

One thing we did see was a little bit of the QB under center, and Helton said we will see more of that with the ability of both QB’s to run play action. There were issues with juggled snaps from shotgun, there were at least three of them that caused aborted plays although Sears was able to scramble for a first down on one of them. There was also a fumble on a pitch attempt from Sears to Chris Edmonson.

Here are some other observations from the day:

* Aca’Cedric Ware ran well. Had a good cutback run and was easily the best player on offense.

* Josh Imatorbhebhe made his share of plays. I thought Josh had a very good week, and Helton said he thinks the light is starting to come on for him in terms of the playbook, which is allowing him to play more relaxed and faster.

* Juliano Falaniko made a real nice play when he slid down the line for a tackle on Ben Easington.

* Jay Tufele had the body slam of the day when Dominic Davis tried a run up the middle.

* Dominic did get mentioned by Helton for converting a pair of short 3rd runs.

* Ajene Harris had an interception when Fink overthrew Tyler Petite.

* Talanoa Hufanga stood out. He combined with Hunter Echols to stop Imatorbhebhe for a loss and had a pass break up to Krommenhoek.

* Dominic Davis tried to get outside on a play but Jonathan Lockett held his ground to make the play. Lockett also read a screen to break it up.

* Levi Jones had multiple stops, including one on Dominic Davis.

* Jay Godfrey broke up a potential TD pass in a red zone drill to Randal Grimes. Grimes also had a catch attempt broken up by Chase Williams.

* Fink had a TD to Davis that was helped by a block from Tyler Vaughns, and a short TD to Imatorbhebhe. Sears had back-to-back completions to Imatorbhebhe and Vaughns, along with a touchdown to Vaughns that ended the scoring.

Among those in attendance were LenDale White, Hershel Dennis and Brandon Hancock. At one point Dennis was talking on the sideline with Stephen Carr. JT Daniels and Devon Williams were also there.

Notes: Michael Pittman was held out with a shoulder issue (AC sprain, x-rays negative)…..Isaiah Pola-Mao and Greg Johnson will not take part in full contact drills this spring as a precautionary measure…..The team doctors are pleased with Marlon Tuipulotu’s progress and he is on target to be ready for fall camp…

“For a guy who just showed up Talanoa Hufanga is making plays. He gets to the ball in a flash and has great football instincts.”

“It’s great to have Porter Gustin back and to see the battles he has in drills with Chuma Edoga. You’re talking about two competitive guys, it’s like watching JuJu and Adoree’ going at it.”

“Brandon Pili is playing with confidence and is taking hold of the nose tackle position.”

“One of our biggest challenges is finding depth at OLB so seeing guys like Juliano (Falaniko) and Hunter Echols is big. Juliano was a skinny thing when he got here but he’s looking good out there.”

“28 (Ced Ware) ran with strength and was moving the chains.”

The Trojans turned up the ? at Spring Football with full pads and live tackling. #FightOn pic.twitter.com/gtGhX1RUe7

After a practice of full pads and live tackling, @USCCoachHelton talked to the media about the quarterbacks, defensive standouts and more: https://t.co/kzJGRN128x