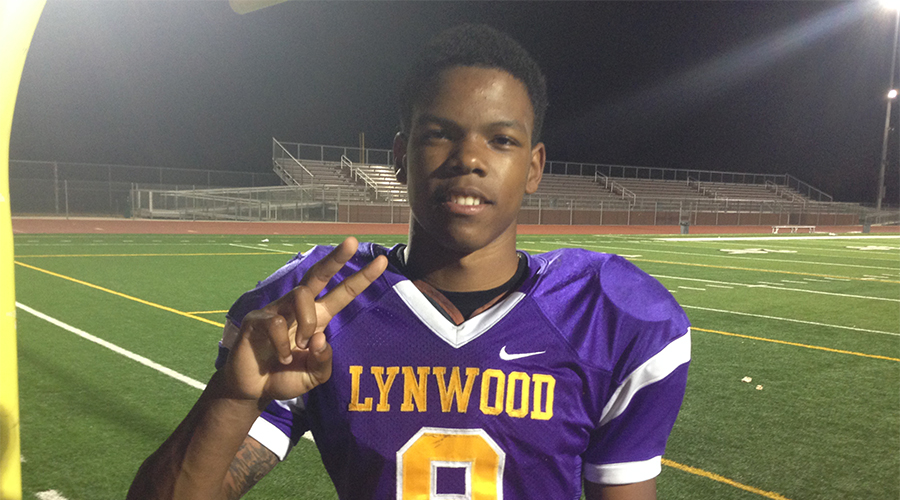 One week after suffering a 50-6 loss to Los Angeles (Calif.) Cathedral, Class of 2017 USC commit Wylan Free helped guide Lynwood (Calif.) to a big 27-6 bounceback victory over Long Beach (Calif.) Jordan this past Friday night with a strong effort on both sides of the ball.

Primarily known for his exploits at cornerback, Free actually spent the game lining up at safety for the first time this season, and he also made a huge impact at both wide receiver and quarterback, hauling in a crucial 36-yard pass late in the contest, which led directly to him scoring on a one-yard touchdown plunge just a couple plays later.

A fantastic all-around athlete, Free’s versatility is obviously part of what makes him such a special talent, and he’s a big reason why the Knights are off to a 3-1 start this season.

“I don’t really have a set role, so I just go in wherever the coach wants me, and whoever is in front of me, I’m up for the challenge,” Free said. “Last week coach had me at running back, and I’ve never played running back in my life. Whatever they tell me to do, that’s what I’m doing.”

While he does do a little of everything, Free believes that his future at USC likely lies at cornerback, the spot he lined up at during the Trojans Skills Camp on campus this past July, where he earned defensive back MVP honors.

Possessing 6-foot-2, 170-pound size, Free brings a unique skill-set to the position that you don’t see every day.

“I think I bring a pretty rare type,” Free said. “I’m a physical corner at the line. I like to play man, I try to beat the receiver up as much as I can, and I have good arm length, so I think I’m a pretty standout corner.”

Earning an offer from the Trojans a few weeks following his performance at the Skills Camp, Free gave a verbal commitment to USC head coach Clay Helton and his staff less than a month later.

And while almost two months have passed since then, Free says that his pledge is just as strong today as it was when he gave it.

“I’m 100 percent solid with USC,” Free said. “It’s just the coaches, the campus, and the alumni base is wonderful. I love everything about it.”

“I’m usually in contact with them about once a week,” Free said. “We have a good relationship. Sometimes we just laugh and joke, or we talk about the game and different things like that.”

Free was able to see those coaches in person recently when he took in the Trojans’ home game against Utah State on Sept. 10. Spending much of the contest hanging out with fellow USC commit Hunter Echols (Los Angeles, Calif./Cathedral) – whom he had faced on the field one night earlier – he had a great time.

“It was wonderful,” Free said. “When we first got there we walked down on the field. We were able to go inside the locker room with the team and see how they prepare for a game. I talked to Tee Martin and Coach Bradford a little bit also. It was great.”

While Free did see USC pick up a victory over the Aggies, the Trojans have also had their struggles on the field this season, losing highly anticipated matchups with both Alabama, and this past weekend, with Stanford.

When interviewed by WeAreSC the night prior to USC’s 27-10 defeat at the hands of the Cardinal, however, Free said that wins and losses aren’t likely to impact the strength of his pledge.

“That doesn’t have an impact on me because it’s just something you have to build off of,” Free said. “Before I came here to Lynwood, I was at Compton, and we lost 99-9 in a game to Long Beach Poly when they had Biggee (Iman Marshall) and Jack Jones. So that doesn’t really phase me.”

While Free is solidly locked in with USC right now, he did admit that there is a chance that he will still take an official visit to Boise State, another school that was under consideration when he committed to the Trojans.

“My mom really wants to take a visit to Boise, but I don’t know yet,” Free said. “If she says she for sure wants to go, then we’re going to go.”

While a visit to Boise State is not a certainty, Free said that there is absolutely no doubt that he will be taking an official visit to USC, and he already has a specific weekend in mind for that trip.

“Me and Hunter, we both are planning on taking it for the Notre Dame game (Nov. 26),” Free said. “Unless anything changes, that’s when we’ll go.”

But that won’t be the only time Free will be back at USC this fall. In fact, so long as his schedule allows for it, he plans to be a regular at the Coliseum in the coming weeks.

“I actually plan on going to most of the games if I can,” Free said. “Most of the time we have Saturday practices, so depending on how it works out with timing, I’ll definitely try to get there.”