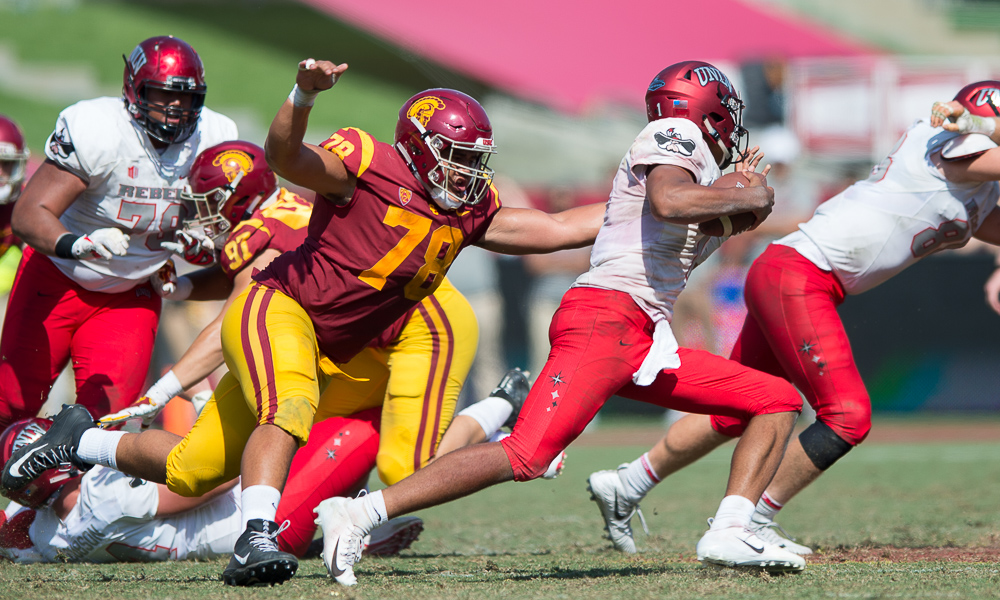 After three nervous days for the USC Trojans eligible for the 2021 NFL draft, four got the dream-like phone call on Saturday that they were selected into the National Football League.

For former 2019 All-Pac-12 defensive tackle Jay Tufele (Salt Lake CityUtah/ Crescent Valley HS), who opted out of playing for the Trojans in 2020, he’ll be part of the remaking of the Jacksonville Jaguars under new head coach and former college coaching legend Urban Meyer.

ESPN Pre-Draft Analysis: Tufele shoots his hands inside and has the upper-body strength to stack blockers. He has a good motor and good range. He flashes active hands, but there’s still room to grow as a hand fighter and he doesn’t have great change of direction rushing the passer.

ESPN Pre-Draft Analysis: St. Brown has good hands with solid body control, and he wins 50-50 balls even though he doesn’t have great size or length. He lacks the second gear to take the top off the coverage and pull away after the catch.

ESPN Pre-Draft Analysis: Hufanga is at his best playing close to the line of scrimmage. He’s an active run-defender who rallies to the ball and flashes as a pass-rusher. He reads the quarterback and flashes above-average ball skills in coverage but is tight with below-average top-end speed.

Former Trojans All-Pac-12 defensive lineman Marlon Tuipulotu (Independence, Ore./Central HS) was taken by the Philadelphia Eagles in the sixth round and should be appreciated by the rabid Philadelphia fan base and first-year head coach Nick Sirianni for his constant motor.

ESPN Pre-Draft Analysis: Tuipulotu is an effective run-defender with the upper-body strength to stack and shed blockers. He tracks the ball well and his motor jumps out at times. Tuipulotu is not a polished hand fighter, and he has average change of direction. He also stalls out too much rushing the passer.

The Trojans had a three-day total of five players drafted when you include OL Alijah Vera-Tucker, who on Thursday night was selected in the first round as the No. 14th pick overall by the New York Jets.

Having not been selected in the three days of drafts, Trojans who went the undrafted free agent route include wide receiver Tyler Vaughns (Indianapolis Colts) and corner Olaijah Griffin (Buffalo Bills).