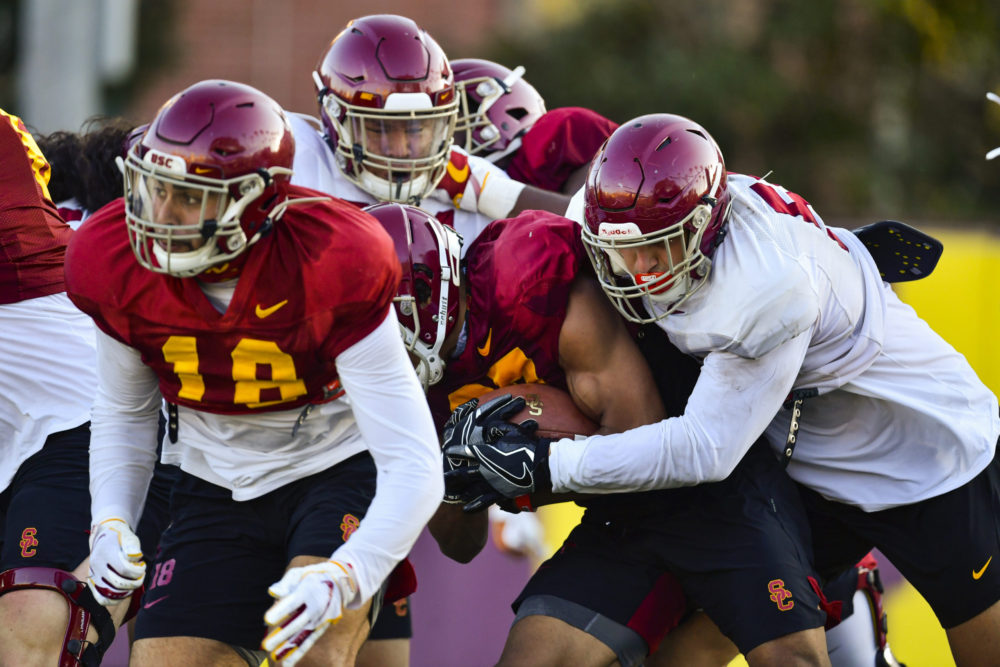 Sure, USC opened fall camp this past Friday and has already had four practice. But to hear USC defensive coordinator Todd Orlando tell it, Wednesday’s practice marks the start of real football for the Trojans.

Today will be USC’s first day of practice in full pads, as the NCAA acclimatization period requires two days in just helmets and two days in helmets and shoulder pads before the full pads can come on.

“Exciting day today because this will be the first time that we go live,” Orlando said to open his media session on Wednesday morning. “Big day today. The building is excited and I think everybody is excited. This is it. This is your resume to show that you’re going to run as hard as you can for your teammates and you’re going to hit somebody. And if you’re not, you’ll be on the sidelines with us. I’m excited about it today.

“You’re going to be based on how hard you run to the football, how you get off blocks and how you tackle. That’s the part that I’m excited about today because we have not seen it.”

Orlando has yet to see his defense tackle anybody, as the only practice during the spring was done in helmets. He said Tuesday’s inside run portion of practice got “pretty spirited,” which was a good sign for him. But Orlando was hesitant to mention a single defensive player who has impressed him so far because nothing has been done under true football circumstances.

“Get past today,” Orlando said when asked about players who have stood out. “When we get past today, I’ll answer that question probably a little bit better, because they all look good. It’s running around in shorts and t-shirts and tagging people off. Everybody looks the part…Give me that question four or five days from now and I’ll be able to tell you this guy’s a real dude because he can do it and he runs just as fast when we ask him to hit somebody as when we ask him to tag him off.”

Orlando’s defense has consistently upped its game, visually and statistically, in his first season at each of his previous stops. He said Wednesday that there’s probably some things with his scheme that aid that, but ultimately a majority of the credit goes elsewhere.

“I’m really into probably more of the culture stuff and running to the football and being physical and having confidence and doing all that stuff,” Orlando said. “I think it’s probably more the internal than it actually is the scheme. A lot of places just need a little bit of a kickstart, and these guys are good.”

Orlando said he’s been able to glean a few things from his defensive players to this point. Unable to meet in person for months, Orlando said there were pros and cons to installing the defense over Zoom meetings. While some players can grasp things visually or verbally through a screen, others need the ability to walk through it and experience it tangibly–something that would be afforded in a classroom setting. But Orlando added that having the extra time to really hammer the scheme installs over and over has yielded positive results. Being able to hit the field now with what he said is 95% of the defense already installed, is allowing players to get to full speed quicker, rather than trying to do an install during spring ball and running into issues on the field, potentially losing confidence while going up against an offense that likely would have been humming.

“I just look at the last four days for us, and saying, ‘Man, these kids retained a decent amount of information,'” Orlando said.

Of course, it’s all going to come back to one thing for Orlando.

“But at the end of the day, you can line up perfect, you can look pretty and do all that stuff,” he said. “But if you don’t run to the football and you don’t hit somebody…I mean, that’s the game of football. There’s no way around it. That’s what we’re going to find out. Some people, they might run 4.6 but when somebody is trying to hit them, they run 4.9. And some guys might run 4.9, but when they’re going to hit somebody, they run 4.6.

“That’s the beauty of this game. It’s contact, and it’s about having a certain type of mindset when you walk onto the field. Now we have the ability to do it. It’s one thing to talk about it…To be able to have a day, today, to be able to do it, is exciting to me because this is where the separation begins. I’m hopeful that everybody is out there and everybody is doing it, but normal case is that’s not going to be the reality of it. And then we’re going to make decisions based on that. It’s one thing to have the tools to be able to do it. It’s another thing to really strain to the football and want to run through somebody. That’s what this game is about.”

Orlando didn’t get into exactly what his scheme will look like at USC and how much it might differ from his time at Texas.

“I would like Arizona State to work a little bit,” Orlando said with a laugh.

But he did say the defensive staff hit it pretty near perfect when they watched film of last season and studied the USC defensive personnel–in terms of what they’ll be able to handle and what positions best suit them.

A few spots where there is some intrigue for the USC defense are up in the front seven, and straight down the middle of the defense. The Trojans will be without standout defensive tackle Jay Tufele this fall, and his departure leaves a big hole in the middle of the defense line. Head coach Clay Helton said veteran returners Marlon Tuipulotu and Brandon Pili will have to step up in a big way this season. Pili said on Wednesday he feels the pressure of needing to do exactly that. Orlando said it will take Pili, as well as a group effort, to get things done up front.

“It’s one of those situations where it’s understandable,” Orlando said of Tufele’s decision to begin preparing for the 2021 NFL Draft. “These guys are going to pick up the slack. There’s no doubt about it. It’s a collective group…The defensive line position isn’t one where you’re going to see somebody on the field for 70 or 80 plays. Collectively, as a group, you’re looking at those guys i the 40s and 50s, depending on how games go. They understand that. There’s no doubt about that and they’ll get it done.”

That defensive line should get a big boost from Drake Jackson, who has technically moved to outside linebacker, but Orlando doesn’t necessarily see a huge difference in his role this year.

“It’s a hybrid position, so he’s going to be more toward the line of scrimmage,” Orlando said. “There were times when they dropped him last year and there were times when he pass rushed…When you think about the term linebacker, it’s not necessarily when you’re thinking about being off the football and playing that way. He’s a guy that has flexibility, athletic ability to do some different things with. Obviously he’s an elite pass rusher, so we have to be mindful of that.”

Orlando also has a situation at Mac (middle) linebacker, following the departure of senior John Houston Jr. and a season-ending injury to senior Jordan Iosefa. Orlando said Kana’i Mauga and Ralen Goforth are the top two candidates for that spot, as they would like to keep Palaie Gaoteote in the spot he played last season.

“Those three guys have stood out to me,” Orlando said. “They’ve got some pelts on the walls. They have the experience…They’re extremely sharp kids. We have really strained them mentally and all those guys have picked up this package really well. I’m excited to see how that shakes out and who ends up being the guys, but they’re all going to play.”

Of course, because this was Orlando talking about guys seeing the field or earning playing time before he’s seen them put pads on and hit. All of those statements come with that certain caveat.

“Like I said, we’ll see after today’s practice exactly where we’re at.”