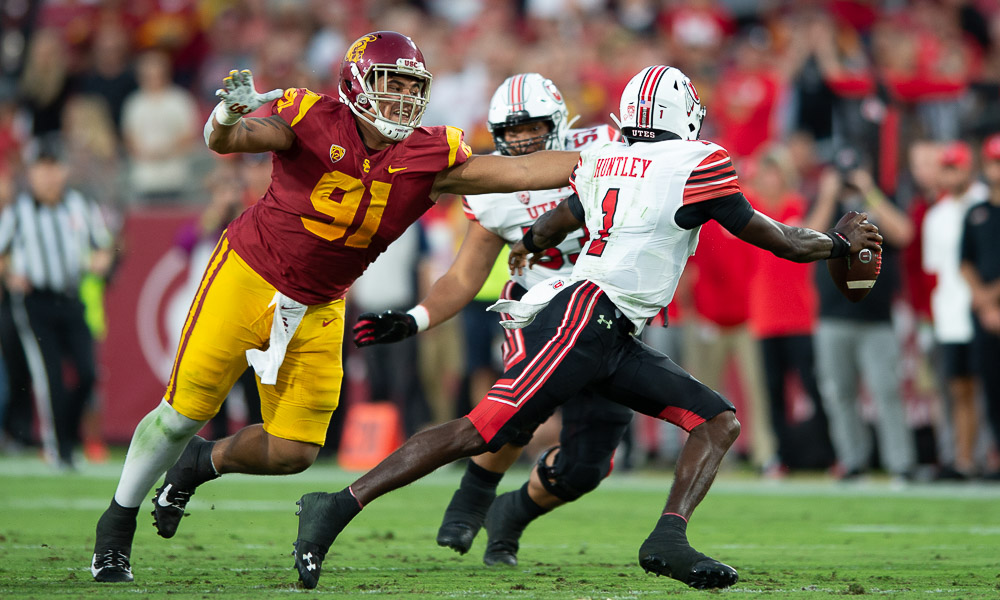 USC lost a number of players to the 2021 NFL Draft, but the Trojans still bring back a wealth of experience on both sides of the ball. With spring ball set to kick off on Tuesday afternoon, we’re taking a look at five returning veterans who are keys to the spring for the Trojans.

Whatever the explanation, Kedon Slovis did not take the expected step forward in 2020 after a tremendous freshman season in 2019. There were flashes of brilliance, some truly great throws and big-time late-game drives. But ultimately, that strange season overall will be remembered for a number of wobbly passes early, and a three-interception performance in the Pac-12 Championship game.

Slovis was going to be limited last spring as he came back from the elbow injury suffered in the final game of the 2019 season, but restrictions will be off the junior this season. He’s already proven that he’s healthy enough to throw as he took part in USC’s Pro Day and looked sharp enough for this point in the year.

He might only have one-and-a-half seasons under his belt, but a third-year starting quarterback at USC has different expectations placed on him for spring ball, as Slovis will be looked at to take command of his side of the ball and get this offense up to speed quickly. This offense goes as Slovis goes, so if he comes out of the gate looking sharp, that would help set the tone for what could be a very productive set of spring practices.

Offensive lineman Jalen McKenzie was one of the names given by head coach Clay Helton as far as players who will compete for the open left tackle position. Whether he does flip over to left tackle or remains at right tackle, expectations will be high for a player who now becomes the veteran tackle for a team that just put offensive linemen into the first round of the NFL Draft in back-to-back years. McKenzie has logged 14 starts and 30 appearances during his USC career, but another level of play needs to be reached if McKenzie is going to take over as one of the leaders of the line and play a bigger part in keeping Slovis upright for a full season.

The line play overall will be one of the major stories of spring ball, and more than a few returning offensive linemen could be in this spot. But McKenzie is the call because of how important he will be to this line, and what a profound impact he could have on improving the offense if he puts together a big spring and rides that momentum into the fall.

Gone are both Jay Tufele and Marlon Tuipulotu and USC will be without transfer defensive tackle Ishmael Sopsher for at least part of this spring. That puts the focus squarely on Brandon Pili when it comes to the middle of the defensive line. There are some younger players who will get long looks and will have opportunities to impress, but this spot is perfectly set up for Pili to take it over this spring.

He came in with both Tufele and Tuipulotu and actually made the earliest impression of all three. Pili suffered a broken finger just before the 2020 season started and missed the Arizona State and Arizona games, then chipped in five tackles over the final four games.

It appears that USC will be fairly strong outside of Pili’s interior position, with Tuli Tuipulotu, Nick Figueroa and Caleb Tremblay returning at defensive end, with Drake Jackson and Hunter Echols at outside linebacker and Korey Foreman joining the roster in the fall.

If Pili can consistently stand out in the middle of the line this spring, it might alleviate any and all concerns about the defensive front for the Trojans.

Cornerback Olaijah Griffin didn’t put up massive numbers last season, with 22 tackles and an interception, but he was a consistent presence and very capable option opposite Chris Steele for the USC defense. With him off to the NFL Draft, there is a hole open at cornerback and redshirt junior Taylor-Stuart is the most experienced of a fairly short list of options to replace him.

Because USC’s nickelbacks are lumped with the safeties instead of the cornerbacks, USC has just six corners this spring, and one of those is newly-converted wide receiver Joshua Jackson Jr.

Dorian Hewett has seen some spot duty, while Jayden Williams and Adonis Otey have been special teams contributors to varying degrees. But it was clear last season that USC would ride with Steele and Griffin outside, though Taylor-Stuart did see some action and started against Washington State.

As with a few other positions, if Taylor-Stuart is able to play at a high level this spring and grab that open cornerback spot, it will answer a major question for a USC secondary that needs to replace both Griffin and safety Talanoa Hufanga.

Opposing defenses are going to divert a major part of their personnel and attention to stopping Drake London this season, which should allow other receivers to step up. McCoy has progressed nicely since a sporadic start to his college career and finished fourth for the Trojans last season, with 21 catches for 236 yards and two touchdowns.

Expectations remain sky-high for the 6-foot-3, 220-pound McCoy and he’s still capable of blowing those away. With both Amon-Ra St. Brown and Tyler Vaughns off to the NFL, there is both a skill and leadership void at wide receiver, and McCoy is one of the top options to fill both.

There isn’t much worry about in terms of players stepping up here. Colorado transfer K.D. Nixon will likely be a major contributor this season, Gary Bryant Jr. will take another step forward, John Jackson III is in his third season and Kyle Ford will eventually make a much-anticipated return from an injury that kept him out all of last season.

It’s going to be interesting to see if McCoy is capable of elevating his game and separating himself from the rest of the group as we’ve seen some veterans do before during spring ball. There is little doubt that he’s ready to contribute significantly, but this offense can go to another level if McCoy is the dominant force he’s capable of being.