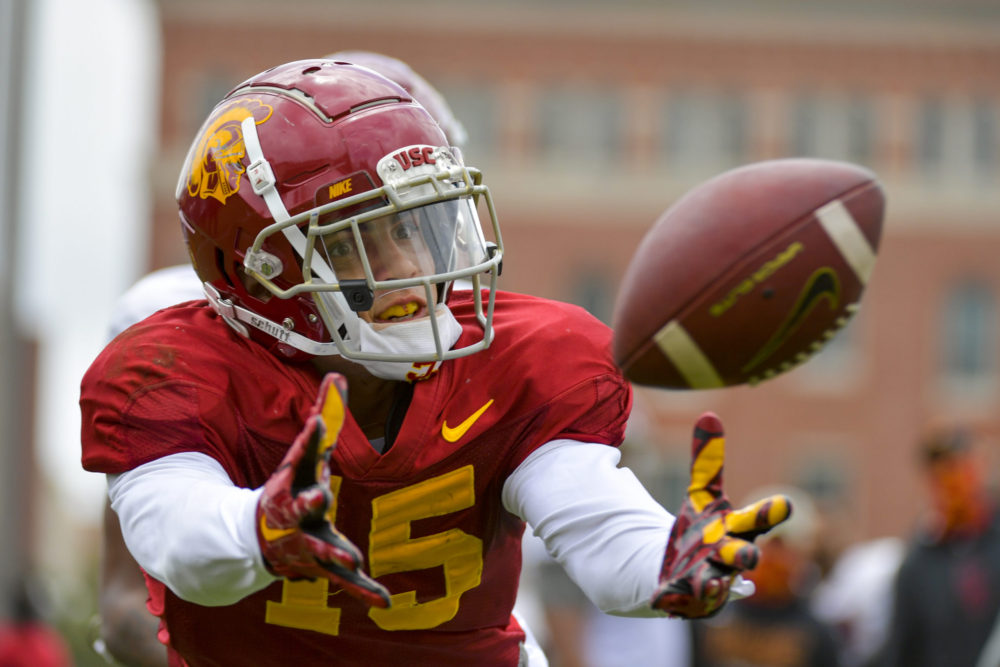 USC’s 15 spring ball practices offered a fairly in-depth look at where the program stands, how players progressed during the offseason and what might be expected from the Trojans during the 2021 season. It’s not entirely important not to draw too many specific conclusions from spring ball considering there is still the summer conditioning program as well as 25 fall camp practices to go before USC suits up against San Jose State to open the season. But there were several things that stood out as major takeaways from the past five weeks, including these top five.

USC lost a ton of production at the wide receiver spot with the departures of Amon-Ra St. Brown and Tyler Vaughns. The assumption was that London would step up as the No. 1 receiver for the Trojans and boy did that prove to be the case. London’s play was the most consistent part of spring ball and as impressive as he was in the 2019 and 2020 seasons, he took his game to another level this spring. Kedon Slovis and London developed a playing relationship as true freshmen during 2019 fall camp, but that security blanket London provides for Slovis was on full display this spring.

London’s play overall was one of the highlights of spring, but where he lined up was one of the big questions coming into spring. After starring as a hybrid tight end/wide receiver role out of the slot and tucked closer to the offensive line, London was going to get an opportunity to split out wide in more of a traditional wide receiver role. He responded well and was maybe better there than he was inside. His body control and hands make him a threat to go down the field and grab jump balls or back shoulder throws. And his size and surprising suddenness make him a threat on slants inside, giving cornerbacks few options on how best to confront him.

The culture change is taking hold

One of the major talkings points from USC coaches and players this spring was the change in culture they were looking to adopt, and much of it brought in by the coaching additions on the defensive side last spring. Without a 2020 spring ball, those coaches didn’t have any extended on-field opportunities to stress how they wanted players to approach playing in this program and instead had to focus fairly quickly on scheme and play implementation.

The big questions remains. As far as culture change, how much can they get done in just one spring ball to see significant on-field results this fall in terms of team speed, toughness and an overall ability to impose its will on the opponent? Technically this is a returning Pac-12 South championship team, but it’s also one that was three fairly fluke plays away from a two-win season last fall. Implementing a major shift is a big ask, but it was clear during spring ball that the coaches are on the right track and backing up their words with actions.

USC ran physical, competitive periods during every full-contact practice and what really stood out was that the program never wavered from the promise of doing exactly that. We’ve seen in the past that full-contact periods can turn into just thud or touch to end a play and mounting injuries could have shut down some tackling practices completely. But USC hit as much and as often as it could within NCAA rules this spring. How much of an impact that has on USC’s record this season is still to be determined, but it definitely takes things in a positive direction for now.

The offensive line isn’t ready yet

USC’s offensive line allowed 15 sacks in 6 games and helped the running game average 3.2 yards per carry last season, then lost its best player in Alijah Vera-Tucker to the NFL Draft and changed position coaches to Clay McGuire. Things clicking into place immediately this spring was not a realistic option, so it’s not as if this should be seen as a failing grade as far as the work being done over the past five weeks.

Returning starters were mainstays in the first group this spring, including left guard Andrew Vorhees, center Brett Neilon, right guard Liam Jimmons and right tackle Jalen McKenzie. But when the shakeup came after the spring game, it appeared as though the offensive line began finding more positive results. It could be that the defense was without Drake Jackson for much of that time, but it felt as though the different combinations up front were flashing positive signs a little more than the established line at the beginning of spring. That could make McGuire’s job tougher, figuring out which five are the best linemen and how they work together best, but ultimately it’s the most important question facing this team.

Courtland Ford took a bulk of the reps at left tackle and looks like a good bet to start there, but Vorhees also took reps out there and his positive play during the spring game at that spot can’t be ignored. Jonah Monheim also saw more and more time with the first team as spring ball went along and he appears to be a very real option at right tackle, with McKenzie potentially moving back inside to guard. The emergency of Andrew Milek at center allowed Justin Dedich to spend extended time at the guard positions until a knee injury to Milek moved Dedich back to center. While the first part of spring seemed to signal the 2021 line would look much the same as the 2020 version, the final handful of practices might have indicated a somewhat different look.

The pieces appear to be there for an improved offensive line and McGuire’s complete understanding of the offense and all the small intricacies of what makes it work and makes for a competent offensive line should provide a boost as well. It was clear at the end of spring that the offensive line wasn’t yet ready to pave the way for a massively productive ground game and keep Slovis from getting hit more than a few times this season, but it also looked as though progress was being made and things were trending in the right direction. Again, the question becomes how much work can be done between now and the opening game.

Most competitive and physical Spring yet! Excited for the fall! #FightOn pic.twitter.com/8HKYbV8qCi

USC had 13 available newcomers for spring ball, which did not include Alabama defensive tackle transfer Ishmael Sopsher. At the end of the spring, it’s safe to say that several of them will see time this fall.

Running back Keaontay Ingram is likely going to be a major factor in the offensive backfield, thanks to his versatility in the running and passing game as well as his physical running style. Wide receiver K.D. Nixon will find a role as a slot receiver. Safety Xavion Alford will at worst be the first safety off the bench and could become a starter if Isaiah Pola-Mao sticks at the nickel position. And with the season-ending injury to Brandon Pili, Sopsher will be needed to step in at defensive tackle right away either to start or provide depth behind several young players.

As far as the freshmen are concerned, wide receiver Michael Jackson III is going to catch some passes this season. How many is still to be determined, since there are some returning options in London, Bru McCoy, Gary Bryant, John Jackson III and incoming Memphis transfer Tahj Washington. But Jackson put on a show this spring and he is physically and mentally ready to make an impact right now.

True freshman defensive tackle Jay Toia is going to have a role along the defensive line. Judging by the growth he’s shown from the time he got to USC to the end of spring ball, and then projecting that over the summer workouts and fall camp, Toia could have the same kind of impact his first year that USC got from Tuli Tuipulotu last season. Without Pili in the middle, the Trojans need someone to step up there and Toia was a revelation this spring.

Defensive backs Xamarion Gordon, Anthony Beavers Jr. and Calen Bullock will all have chances to see the field on special teams, and they all could be just a snap away from seeing significant time on defense as well. They all ran with the second team this spring because the safety position was so thin for the Trojans. All three worked at cornerback as well, as numbers there were very low for most of spring.

The defensive line is showing promise

With so many questions about the offense line, it’s really difficult to announce any firm answers about the USC defensive line coming out of spring. But it’s impossible not to be a little impressed with the improvement specific players are showing up front.

The play from Toia was noted, and he joins returning lineman Jamar Sekona as having very productive springs. The jump forward from Tuli Tuipulotu was noticeable and he’s viewed as a defensive and team leader at this point in terms of his production and value to that side of the ball. Drake Jackson is listed as an outside linebacker but he’s a dominant force as a pass rusher. The jumps seen from Jacob Lichtenstein, Stanley Ta’ufo’ou and De’jon Benton were notable, and this was a spring where the line was working without Nick Figueroa for the duration. Kobe Pepe also flashed early before an injury knocked him to the sideline.

USC lost some depth when Connor Murphy transferred to UNLV and again when Caleb Tremblay only recently made the move to Tennessee. But it’s easy to be pleased with this group’s performance this spring, especially when Sopsher, Figueroa and incoming defensive end Korey Foreman will be added for the fall.