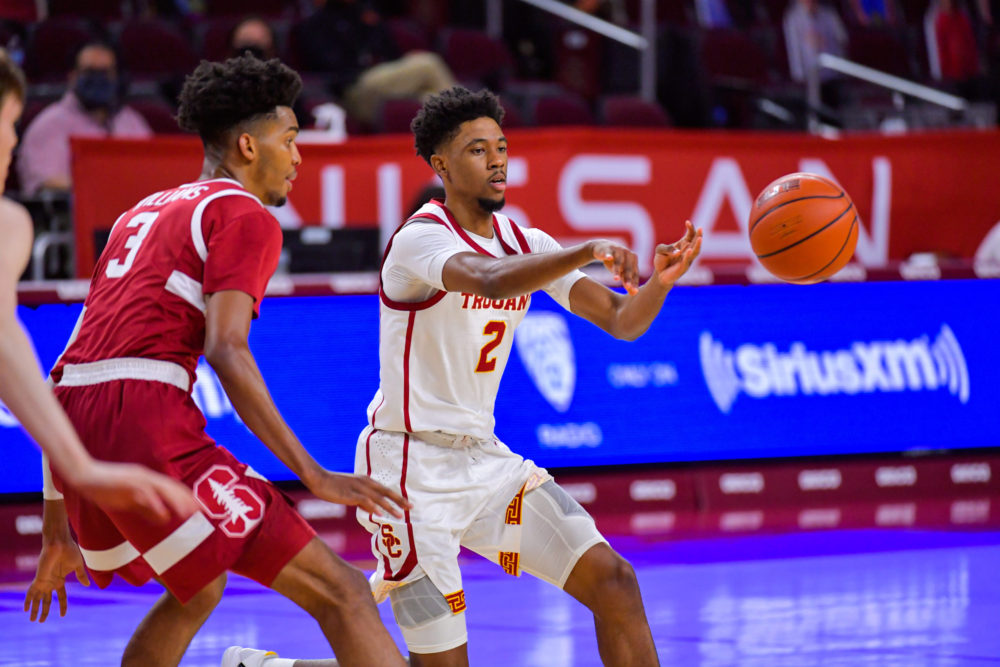 The Trojan team and staff watched the selection show from a conference room in their hotel in Las Vegas and leave for Indianapolis on Monday morning. Coach Enfield along with Evan Mobley and Tahj Eaddy spoke to the media after they learned that they are a six seed and will play Saturday against the winner of a play-in game between two eleven seeds, Drake and Wichita State, who play on Thursday.

As a six seed, the Selection Committee confirmed that USC is one of the top 24 teams in their minds. It appears that the Trojans may have been the highest of the six seeds.

Enfield said he didn’t know anything about either potential opponent. He said that not knowing their first opponent until Thursday night makes it more difficult to prepare and they will prepare for both teams this week until the play-in game is decided. He added that having one full day to prepare isn’t unusual in the Pac-12. The Trojans played Thursday and Saturday most weeks in conference play and if they win on Saturday they will have only one full day to prepare for their next game on Monday.

If USC wins on Saturday the Trojans will face the winner of the game between third seed Kansas and fourteen Eastern Washington. The Trojans and Jayhawks were scheduled to play in December before the non conference schedule was reduced and revised due to Covid.

A Quick Look At The Possible First Week Opponents

Drake finished second in the Missouri Valley Conference behind Loyola of Chicago and lost the tournament championship final to Loyola by ten. The Bulldogs were one of the last undefeated teams when they split back to back home games against then 18th ranked Loyola in mid February, losing 81-54 and winning the next night 51-50. Two weeks later they split two games at Bradley, winning 80-71 and losing 67-61 in the regular season finale.

Wichita State plays in the American Athletic Conference. The Shockers were 16-5 on the season and won the regular season conference title, based on winning percentage like in the Pac 12. They finished 11-2 in AAC play and highly ranked Houston was 14-3. The Shockers lost in the conference tournament semi finals to an average Cincinnati team by one. They split two games with Houston, each team winning on its home court.

Kansas had an off year for them. The Jayhawks finished second behind Baylor in the Big 12 regular season, losing six conference games which is almost unheard of at KU. They played one more conference game than six loss Texas and West Virginia, thereby claiming the second seed in the conference tournament. KU slumped mid season and fell out of the rankings before rallying late. They beat Oklahoma in their opening tournament game and were then forced to withdraw due to Covid issues. In order to play in Indy the team must have seven consecutive days of negative tests before traveling to Indianapolis. At this point their ability to play their first game on Saturday is up in the air.

More On The Trojans Tournament Preparation

The team practiced for an hour and a half in Las Vegas Sunday before the tournament pairings were revealed. The players are still involved with school work; two have tests on Monday and a few have papers due.

No one on this Trojan team had played in a Pac-12 Tournament game before or has played in the NCAA Tournament for USC. Enfield said that to be successful in the tournament “(y)ou need to play to your strengths and do what you do well.” He said that USC is one of only a few teams that are top ranked in the top 30 in the KenPom rankings on both offense and defense.

When asked about not getting to the Sweet 16 since he has been at USC he said he thought last year’s team had the potential to make the round of 16. He added that in 2017 they lost in the round of 32 by four to three seed Baylor and that a late goal tending call was a major factor.

“I’m full of excitement. It’s my first time in March Madness,” Eaddy said, adding that he is blessed to have fallen into a perfect situation with the opportunity to play significant minutes and be a leader. “I’m fortunate to be in this situation.”

Tahj said that playing in the tournament “is big time for myself and my family. They’ve gone thru the journey with me from a distance on TV.”

He said his main goal in deciding to play at USC was that he wanted to go into a situation where he could win. His mindset going into this season was that it was an opportunity to do something great.

Evan said that he knows that this is a big stage and that big players need to play well on this stage. Every game could be the last game of the season.

In talking about his calm on court demeanor he said that is his personality.

“Never too excited or too down,” Mobley said. “I just want to stay focused and play my game.”

The most interesting comment by Evan was in response to a question about this being his one shot in the tournament.

Four Other Pac-12 Teams Are In The Tournament

Colorado is a five seed and will play surprise Big East Tournament winner Georgetown in a first round game. Georgetown had no chance to be selected unless they won it all in Madison Square Garden this past week. If Colorado wins its first game the Buffs will play the winner of the Florida State and UNC Greensboro game. Fourth seed FSU will likely win and be a tough matchup for the Buffs.

Oregon is the seven seed in the same region as the Trojans. They play a good Virginia Commonwealth team in the first round and if they advance will play the winner of the game between two seed Iowa and fifteen seed Grand Canyon. A matchup with Iowa would be a difficult game for the Ducks. Iowa is built around senior center Luka Garza, the likely national player of the year. Garza is a very big body and the Ducks don’t match well against him.

UCLA is an eleventh seed and one of the final four at large teams in the tournament field. They are in a play-in game against perennial power Michigan State. The Spartans had an off season but played much better over the last few weeks. The winner of that game will play six seed BYU. The Cougars, who USC beat in December, will give the play-in winner a tough game. If the Bruins can win those two games they will likely face a very good third seed Texas team which won the Big Twelve tournament this week.

The surprise PAC 12 Tournament winner Oregon State Beavers are a twelve seed and play five seed Tennessee. The winner will likely play four seed Oklahoma State. It’s hard to see the Beavs winning two games this weekend but a week ago no one thought they could win the conference tournament.

Last Look Back At The PAC 12 Tournament

I suspect it didn’t go unnoticed by many Trojan fans that Colorado didn’t shoot the ball nearly as well against OSU as they did the night before against the Trojans. They struggled from beyond the arc making 6-19 threes, though it could be that the OSU defense did a better job than the Trojans. CU also missed a number of free throws, making only 12-20. If they had not made as many threes or free throws….

I asked Enfield whether they considered intentionally fouling on the last CU possession since USC had only four team fouls and everyone knew McKinley Wright would work for a shot late on the shot clock. He said that the coaching staff did think about it but concluded that they wanted to have a last possession. The game clock was four or five seconds behind the shot clock and if USC fouled CU would get a new twenty seconds and the Trojans would not get a last possession.

The strategy would have been perfect if the Trojans got the last defensive rebound.