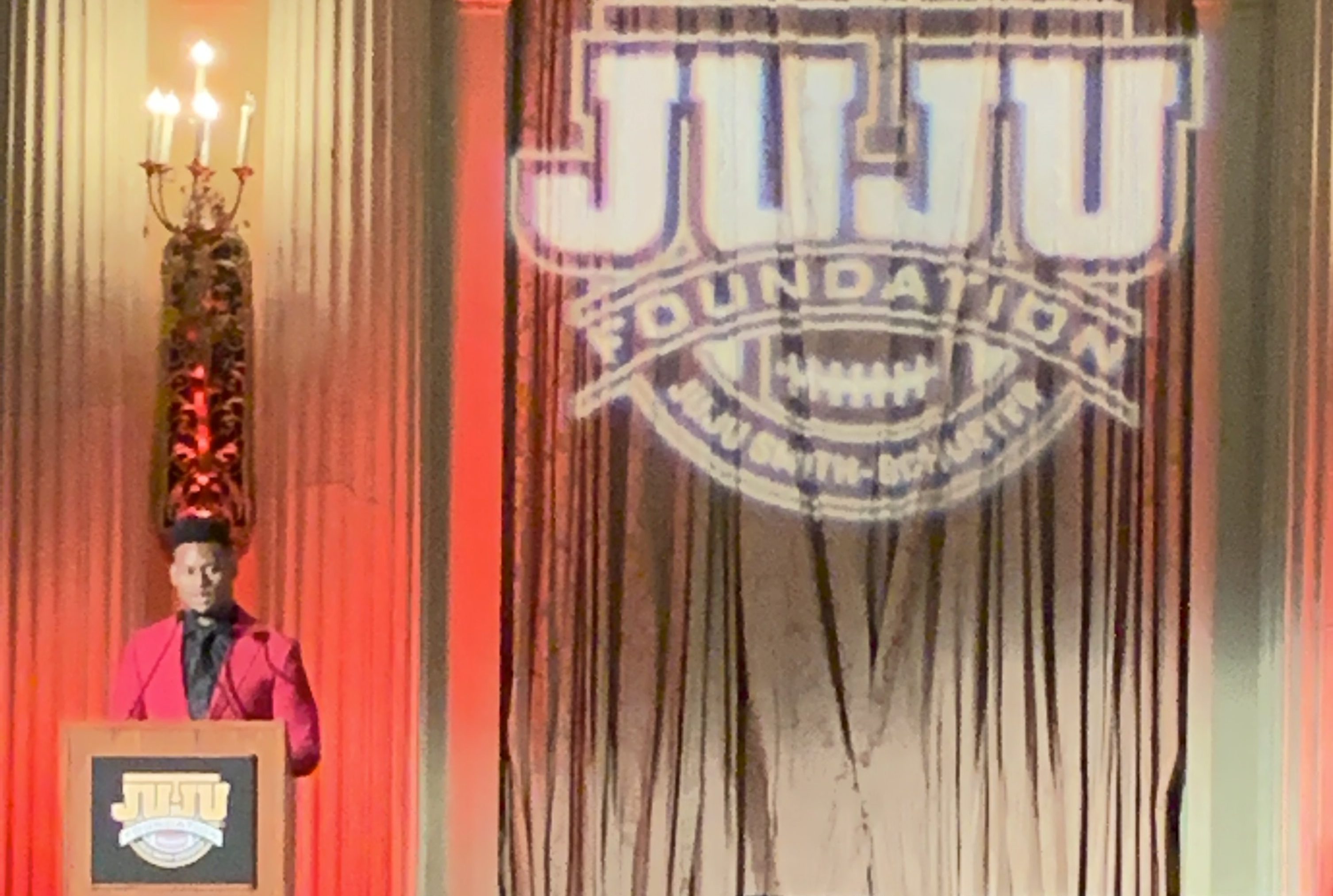 Proceeds from the event benefited both the JuJu Foundation and the Boys and Girls Clubs of Los Angeles, which received a $10,000 check from JuJu during the evening. JuJu’s foundation calls itself “a non-profit organization dedicated to the support of youth initiatives and lifting the spirits of those in need.”

The festivity, which was attended by an estimated turnout of 250 people, began with a private reception for VIPs and legends at 5:30 p.m. followed at 6 p.m. with a general cocktail reception and silent auction and highlighted at 7 with dinner, program, and live auction.

Silent auction items included memorabilia from not just USC football but Pittsburgh Steelers items and other signed assortment of jerseys with autographs from other sports like a Sandy Koufax signed photo. Each dinner table had  auction items that consisted of a Trojan football helmet signed by the evening’s USC legends and a book, Miracle Moments in USC Trojans Football History, by our media buddy Dan Weber.

As for the main program highlights, FOX 11 news personality Elex Michaelson, a USC grad, served as the evening’s master of ceremonies and did a masterful job of being entertaining and moving the program along.

MC Michaelson opened the program by saying, “Athletes have a platform, and what JuJu is doing tonight is to make things better. It’s amazing he’s doing this at 22-year-old and with the help of so many generations (of former Trojan athletes and supporters).”

Next up was JuJu Smith-Shuster, who welcomed all in attendance. JuJu began by talking and pointing out all those he felt had helped him along the way to be where he is now. The former Trojans’ wide receiver great said, “I picked USC because of Trojans family and church. Who doesn’t want to be a Trojan? Being a Trojan means giving back to others.”

“My foundation allows me to give back,” said JuJu, who also made special mention of those that made him who he is today like Trojans’ head coach Clay Helton, AD Lynn Swann, athletic student advisor Heather Bell, and Mimi Butler.

There was then a short break in the program as comedian Gary Cannon, who currently warms up audiences for the Conan O’Brien Show, combined both comedy and being an auctioneer of some big ticket items like a large canvas painting of JuJu in a Steelers’ home uniform, and, yes, JuJu signed it on stage. There were also some vacations trips out of the country like a glamorous vacation to Costa Rica.

The program then continued with the celebration of Anthony Munoz and Pete Arbogast.

Pete Arbogast was the first inductee to “A Tribute to Trojan Football Legends,” and the deep, commanding voice of “Arbo” certainly grabbed the attention of the audience. Pete was the recipient of the Trojans Media Excellence Award.

“I started calling USC games as an 8-year-old,” said Arbo, who then gave credit to his USC radio team for making the broadcast of Trojan games so much fun.

“I love my job,” the longtime Trojan voice informed and then proceeded to go down his own personal cardinal and gold memory lane, which began in 1963, as he recalled the likes of Mike Garrett, O.J. Simpson, the Wild Bunch, Ron Ayala’s famous field goal to beat Stanford, and on and on.

However, Arbogast said that aside from calling USC games, he was most satisfied with a life outside of broadcasting. He told the audience of his love of working for many years with the YMCA and working summer camps and that “giving back to the community is important.”

“Do something good in your community,” urged Arbo, who also told the audience he was honored to be able to work with youth and USC.

Larger than life former offensive lineman Anthony Munoz, who is arguably the greatest offensive tackle in NFL history, next came to the podium.

“For me to stand up here, I do so with great humility,” said Munoz, who is in the Pro Football Hall of Fame.

“My mom taught me my work ethic and how to deal with adversity,” informed Munoz, who said it was that lesson that helped him overcome his senior season at Troy when he went down with a knee injury and was able to play in only one game that season, which was the Rose Bowl.

“I learned on the USC practice field to never give up and how to deal with everything that came my way,” Munoz said.

“I also learned about relationships at USC. I met my wife, Dee Dee, my sophomore year.”

Still, despite his legendary football career that started at Ontario (Calif.) Chaffey High, Anthony concluded his speech by again emphasizing giving back.

“Again, I am thrilled and humbled to be here tonight. What are you going to give back when it’s all said and done, giving back to our youth and our country?” Munoz challenging the adorning audience.

And Anthony’s final remarks brought an emotional response. He said he remembered working in high school and before he went to work, he was watching the legendary 1974 USC/Notre Dame. Anthony, who was heavily being recruited by the Trojans, said he watched the first half and the Trojans, the team he always dreamed of playing for, was really down (24-6). He, too, was really down because of the halftime score and continued being angry at work. A friend of his came into his place of employment later, and Anthony asked the final score of the USC/ND game. He couldn’t believe it when his buddy said the Trojans had roared back to win the game (55-24).

Anthony said he was being recruited by Trojans’ Hall of Fame coach John McKay, but McKay announced that he was going to expansion Tampa Bay of the NFL, and for a short time USC had no coach. Munoz said it was then that UCLA really went after him to sign him, but when the Trojans hired John Robinson, Anthony was back in his cardinal and gold comfort zone and eventually signed with his dream school.

Appropriately, Anthony concluded his USC/ND story, the UCLA recruiting push, and his signing with the Trojans by saying, “You are a Bruin for four years, but you’re a Trojan for life – a true statement.”

The evening came to a close with a brief but informative panel discussion with Clay Helton, Sam Cunningham, Anthony Munoz, and JuJu Smith on stage. Clay was very confident that the Trojans would be back in 2019, Sam “Bam” said it was being a Trojan that was bigger than some of his big games, Anthony Munoz said how his first and biggest memory was the first time he came down the Coliseum tunnel to play in a game, and JuJu concluded by talking about the importance of family and friends.

With a CD of the Trojans Marching Band playing “Fight On” celebrated the room, past Trojan football players gathered on stage for one big photo opportunity, which was greeted by a bevy of fans with cell phones and high-priced cameras snapping away. It was a rousing success of an evening for all.

For more information on the JuJu Smith-Schuster Foundation, go to: www.jujufoundation.org