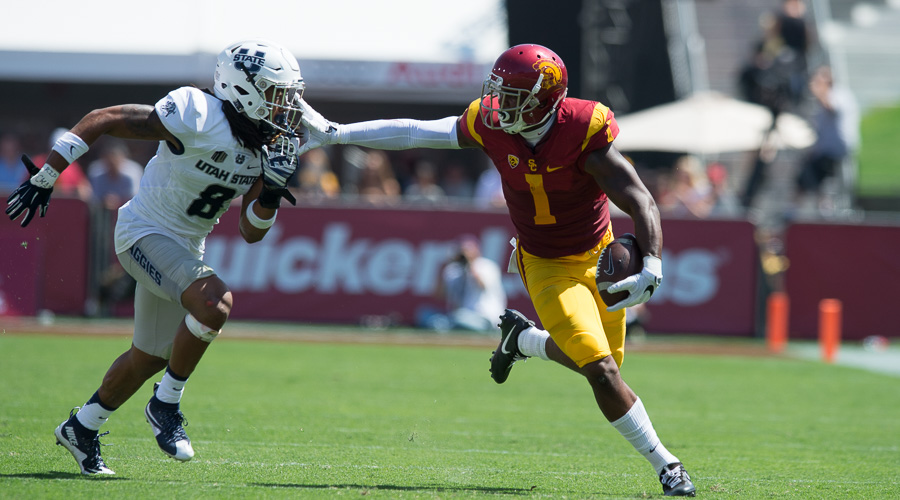 The priorities for the Trojans in the game against Utah State didn’t have as much to do with the Aggies as they did with taking a step forward with crisp and efficient USC football. To be fair, nobody is going to confuse Utah State with Alabama or Stanford but you can only play the team you play, and for the Trojans that meant going out and performing at the unusual kickoff time against a team everybody expected you to beat.

The good news is that it was mission accomplished on all fronts with production from plenty of different areas.

On offense, it started with the run game led by Justin Davis, who had 16 carries for 70 yards while also adding a screen pass reception that went for 27 yards. Aca’Cedric Ware also got some action with 11 carries for 57 yards and a late diving touchdown that brought back memories of Trojan tailbacks of the past.

One of the reasons the run game was able to get going was because the offensive line didn’t have a hiccup after losing Toa Lobendahn to knee surgery during the week, and then having Chuma Edoga tossed from the game on the opening series after an encounter with a referee. The Trojans inserted a couple nice options with Nico Falah at center and veteran Chad Wheeler at left tackle, who has been battling plantar fasciitis in his foot but showed no ill effects.

There was efficient play from the quarterback position as Max Browne ended the day going 23-30 for 182 yards, two touchdowns and a pick. Sam Darnold went 5-7 for 62 yards with a pair of touchdown throws. It was the first TD pass of their college career for both players.

The ball was spread around to 10 different receivers and they were led by Darreus Rogers (7 catches, 82 yards) and JuJu Smith-Schuster (7 catches, 56 yards, 2 touchdowns) while Deontay Burnett also opened some eyes with his 3 catches for 24 yards and a score. The most memorable play from the receiver group might not have been a catch though, as the crack-back block by Smith-Schuster was one of the biggest hits you will see, and it has been replayed a lot on social media.

The Trojans also did what they were supposed to do defensively, which was shut down the Aggies run game which had put up over 400 yards in their opener but was only able to gain 49 yards on 26 rushes against the Trojans. This was done despite the absence up front of Noah Jefferson and Khaliel Rodgers, who both sat out due to injury, but the one thing that stood out was two passes batted down at the line from both Rasheem Green and Uchenna Nwosu.

In the secondary, Chris Hawkins had 8 solo tackles, a pass break-up in the end zone, and a terrific read to fight through a four-WR set to get a tackle-for-loss. Leon McQuay added a pass break-up of his own to go along with an interception.

And the special teams got into the act too, started by freshman Michael Pittman getting a blocked punt that was recovered by Quinton Powell deep in Utah State territory to set up the opening USC touchdown, and then Adoree’ Jackson electrified the crowd as only he can with a 77-yard punt return for a score. Adoree’ also had a chance to share the moment with his mom after the game in a touching interview.

It was the kind of victory the Trojans needed to lick their wounds after the Alabama game and to gain much needed confidence heading into the Pac-12 opener next week in Palo Alto. This was a team that took a punch in the gut in Dallas and heard the questions all week long, and there is something to be said for rebounding and putting together a solid effort the following week, no matter who the opponent.

But now the stakes go up. The Trojans know that, and Stanford will be waiting. But if the 24-hour rule that was in effect last week to forget the Alabama loss is also in place this week, that means there is still time to appreciate a nice win in front of the home folks before moving on to the next opponent.