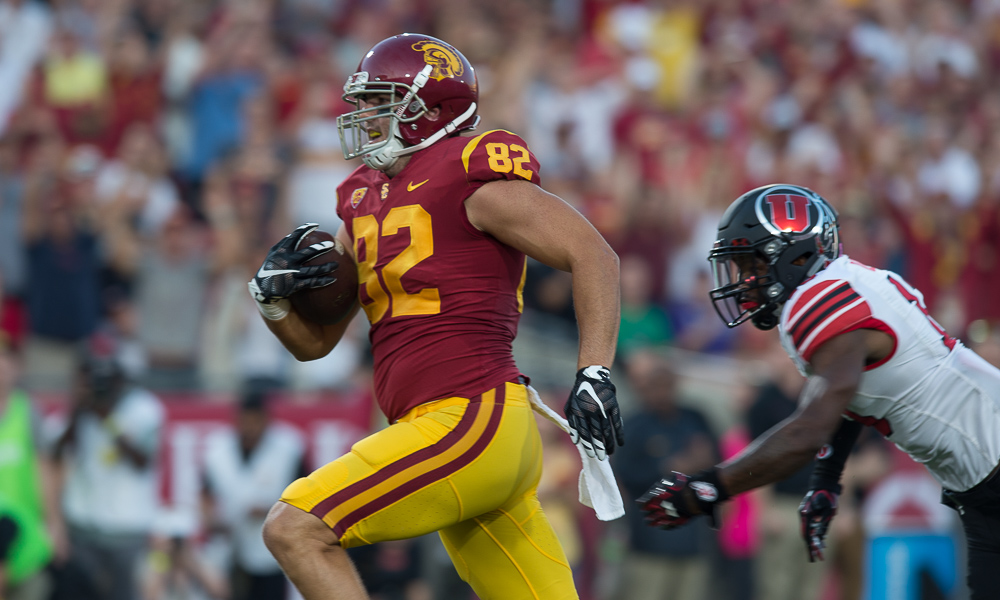 The end result was certainly satisfying for the Trojans with a 28-27 victory over Utah but the route to get the victory was anything but easy.

It was a first half where much went against USC, from a fumble on the opening possession, to three turnovers total that led to 14 Utah points, to missed tackles, to a senior captain getting called for offsides (twice) and a Utah running back rushing for over 100 yards, it looked at the halftime break as if every problem that had plagued the Trojans this year was coming into play.

But then things changed.

From the opening possession of the third quarter when the Trojans got the ball at their own two-yard line, it was the start of a second half where so much would go right. Sam Darnold and the offense proceeded to drive the ball 98-yards for a touchdown, the first of three drives in the half that would be 11 plays or more and cover 88 yards or more. We saw more of a commitment to the run game, including runs from Darnold himself. We saw a young offensive line settle down and perform well. We saw Tyler Vaughns with a clutch catch on 4th and 9. We saw the defense limit Zach Moss to 28 rush yards in second half. We saw a terrific performance from Cameron Smith with 16 tackles and a pick, and his one-on-one battle with Moss was a pleasure to watch for fans of physical football.

But even after Ronald Jones got flipped into the end zone for the score to make it 28-21 in favor of USC with less than 5 minutes left the game still wasn’t over, as the Utes were able to drive the ball down and put it into the end zone to make the score 28-27. Utah coach Kyle Whittingham made the decision to go for two, a risky but understandable choice, and Ajene Harris made a huge play to tackle Troy Williams short of the goal line to preserve the win. And thankfully he did, as Williams had a receiver wide open coming across the back of the end zone, as well as a clear running lane if he had chosen to go to his left. Of course, it doesn’t matter, he ran to the right, and the Trojans won.

For a USC team that is well versed this year in tight ballgames, this one was arguably the most important to pull out. By beating Utah, the Trojans sit squarely atop the Pac-12 South standings with a 6-1 overall record, 4-1 in conference and have the ability to control their own destiny as far as an appearance in the conference title game. The Utes were thought to be a primary challenger and they didn’t do anything to hurt their reputation as a physical football team, but the Trojans (yet again) simply found a way to win.

How did it happen?

USC coaches and players say that nothing unusual was spoken at halftime, no fire and brimstone speeches that would have been delivered by a Marv Goux or Ed Orgeron, but you can’t deny that something changed in the Trojans when they came out for the second half.

* USC did not give up a sack, yet got to Williams four times
* Sam Darnold had 358 passing yards and no picks. Loved seeing him under center at times, going up tempo and then huddling up later in game.
* The trio of Burnett, Vaughns and Mitchell combined for 20 catches.
* Not only did RoJo go over 100 yards again (111, as well as scoring a TD in 13 straight games) but I liked the 4 carries for 42 yards that we saw from Vavae Malepeai.
* We expected a boost in the TE production with the return of Daniel Imatorbhebhe, we just didn’t know the big plays would come from Tyler Petite (2 TD’s, including a 52-yards) and another TD for Josh Falo.
* Kudos to Andrew Vorhees and Austin Jackson, a pair of true freshmen who held down the right side of the line with solid results.
* Josh Fatu with 7 tackles, 1 sack and 2 TFL. Josh has steadily improved all season long. And Christian Rector added 6 tackles and 2 sacks (currently leading Pac-12 in sacks).
* Jackie Jones continues to get better, 7 tackles in this game and a pair of pass break-ups.
* Helton calling TO before final two-point conversion attempt. It could have been risky to give up the time-out if Utah scored but I liked the call, the defense had a chance to gather themselves before such a critical play, and it worked.

Now the Trojans turn their attention to Notre Dame and you know the Irish will be ready. That’s fine, we’ll be ready too. I hope we see more of the 2nd half Trojans from last night than the first half but no matter what happens you know this team has the ability to find a way to win, they proved that once again in this game.