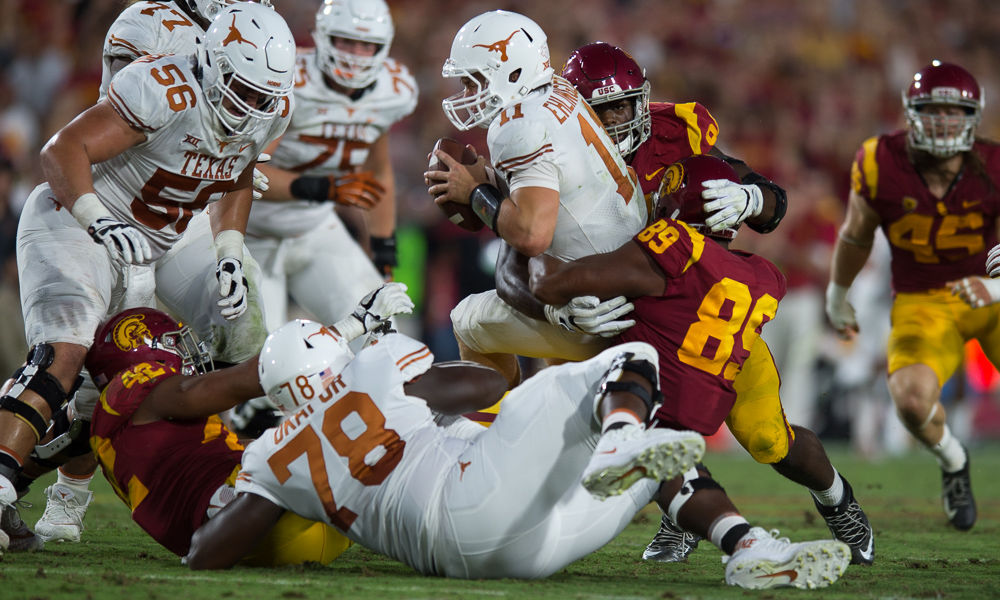 During the build-up for the USC vs Texas match-up there was plenty of talk about the 2006 Rose Bowl, with varying opinions on how much this game might mean for revenge or payback on the Trojans part.

I didn’t buy off on that too much, the unpleasant memories of the Rose Bowl loss still lingered large, and the thought was nothing that happened in the 2017 game could take away from that sting.

I’m certainly not saying that the double-OT USC win makes up for the Rose Bowl (there was no 3-peat national title on the line in this one) but when Texas mounted that fourth quarter drive to take the lead last night, it was impossible not to have flashbacks of what took place 12 years ago, and the thought that ran through my mind and many others was “oh no, not again.”

And, thankfully, it truly was a case of not again. Instead of time running out on the Trojans as it did with Matt Leinart and company, we saw Sam Darnold getting the ball back with :39 left and hitting a pair of passes to Stephen Carr and Steven Mitchell to set-up Chase McGrath for a game-tying 31-yard field goal as regulation time expired. Clay Helton called it the best two-minute drive he’d ever been associated with. It was also the first made field goal for McGrath in his college career, but, as it turned out, it wouldn’t be his biggest kick of the night.

As the teams moved to overtime, there was a sense that the Trojans had dodged a Texas-sized bullet, and the game was once again there for the taking. Darnold hit Deontay on the first play of OT for a touchdown, and Burnett promptly gave kudos to Leinart, who was in the back of the end zone near his Fox TV set. The Longhorns came right back and scored to force a 2nd OT, and then marched the SC 3-yard line for what looked like a sure score, right up until Christian Rector stripped the ball from Texas QB Sam Ehlinger, and it was recovered by Ajene Harris. The Trojans didn’t move the ball, although that Tyler Vaughns play in the end zone sure looked like a catch, and it set up the McGrath kick from 43 yards that instantly put his name in Trojan lore.

Truth be told, the majority of the game wasn’t all that well-played. There was no score in the first quarter, neither team ran the ball particularly well (both averaged 1.9 yards per rush) and there was an abundance of penalties (18) and punts (13 between the two teams). The Trojans were 0-3 on 4th down conversion opportunities, including one on the 2nd drive of the game when they marched to the Texas one but were unable to punch it in. Dropped balls were once again an issue (four total for the Trojans) and when Deontay Burnett is dropping a pass you know it is a problem. But when it came time to produce end-of-game drama, the Trojans and Longhorns delivered once again, and like that game 12 years ago, there were several key moments along the way in this version which significantly changed the course of the game.

* Porter Gustin wasn’t able to play much, he had surgery for his toe on Wednesday, and didn’t dress for the second half after suffering a bicep injury. But during his time on the field he contributed back-to-back sacks and a lesson in toughness and being there for your team.

* The only Texas score of the first half came when the Trojans threw the ball from deep in their own end with :19 left in the half, the ball went through Jalen Greene’s hands and was intercepted and returned for a touchdown. That play tied the score at 7 and it looked like the teams would head into the locker room tied, but the Trojans got the ball back with :10 on their own 38, and a Hail Mary call turned into Hail Rojo, as Darnold checked down rather than throw it deep, Ronald Jones took off across the open field with help from Steven Mitchell on a crushing block, and suddenly the score was 14-7 in favor of USC.

* Rector stepped in on the d-line that was missing Marlon Tuipulotu, Gustin and Rasheem Green (who left with an ankle injury) and responded beautifully with a stat line that showed 6 tackles, a recovered fumble, 1.5 sacks and 2.5 TFL, in addition to the clutch strip in overtime.

* Once again it was the undeniable chemistry between Darnold and Burnett that delivered in key moments. Deontay finished the game with 8 catches for 123 yards and two touchdowns, the kind of stat line that is becoming routine for him. As for Sam, whether it was a jump pass or a perfectly placed ball to Tyler Vaughns in the 2nd OT that sure looked like a game-winning play, it was another clutch performance with the game on the line.

* What stuck out to me about McGrath was his deadpan delivery in the post-game media session. Walk-on true freshman kickers typically don’t find themselves seated next to Heisman Trophy candidates at the interview table after their 3rd game, but that’s where McGrath was and when he was asked about nerves kicking in on his two made field goals he simply said “Really they didn’t kick in that much on either of them. They were both the same kick to me. I treat every kick the same.” Good job, young man.

At the end of the day, what I’m taking away from this game is the way the Trojans responded to adversity at the end of the first half, the end of regulation, and in the overtime periods. On a night when they didn’t have their best stuff, the Trojans found a way to win, and the fact that it happened in that style, against that team, just made it all the more special.