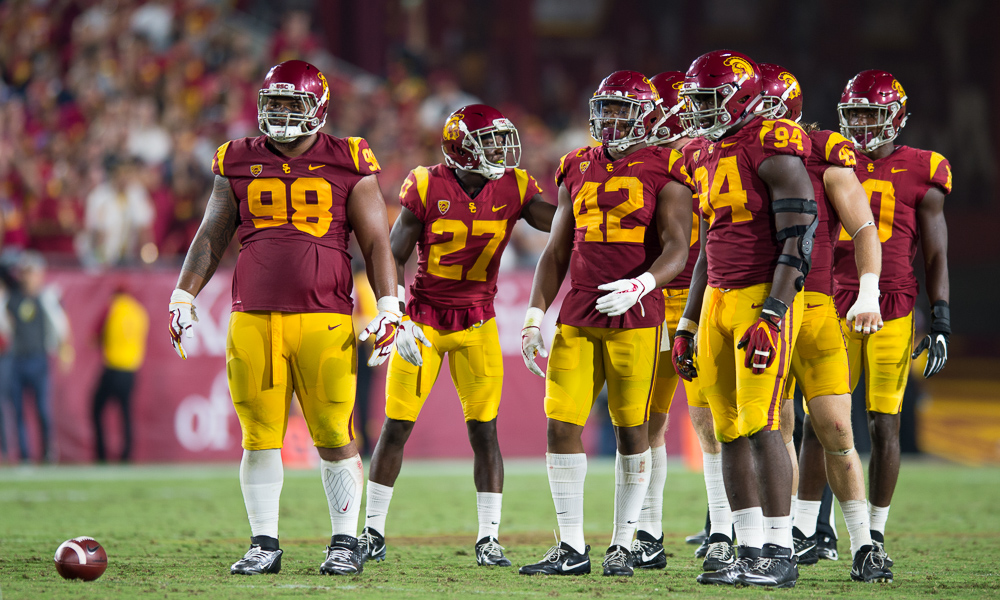 There was a lot of talk this off-season wondering if USC was back among the nation’s elite, if the top 5 ranking was deserved and if the Trojans could live up to the hype.

Well, the 42-24 victory over Stanford may have only been one game but the way the Trojans played, the physical way in which they took the fight to the Cardinal, clearly sends a message about where the program is at right now.

Consider some of the comments that were heard after the game.

“We played to our standard tonight” – Clay Helton. You get that from the head coach when you put up 623 yards of total offense, when you respond to every moment of adversity, when you dominate time of possession, and convert on 10 of 12 third-down attempts.

“For the first time in 10 years I watched Trojan football tonight” – former USC offensive lineman. The Trojans put up 307 rushing yards in the game with two tailbacks going over 100 yards. They held the Cardinal rushing attack to 170 yards, 75 of which came on one play. That is controlling both sides of the line of the scrimmage, something that has long been a trademark of USC football.

“Finally we punched them back” – Trojan fan. The Cardinal had beaten USC 7 of the last 9 meetings, including the last 3. In that time, Stanford had built a reputation for physical football, for running the ball, in essence they had beaten the Trojans at their own game. Not tonight, not in this game. Let there be no mistake, this was a big man vs big man game and it was the Trojans who were the aggressors. And it sure felt good to see.

There wasn’t anything fluky about it either. On the first play from scrimmage, Josh Fatu got into the Stanford backfield for a 3-yard tackle-for-loss. When the Trojans got the ball, six of the first seven plays were runs, on the way to a 13-play, 80-yard touchdown drive. When Bryce Love broke off his 75-yard touchdown run, USC responded with another 80-yard touchdown drive. In fact, every time the Cardinal scored in this game, the Trojans came right back with a score of their own. Even when the refs made some questionable calls (the roughing the QB calls against Rasheem Green and Porter Gustin) we saw Uchenna Nwosu make plays to halt the drives right away.

It was perfect timing for the USC defense to come up with that kind of performance. There were questions swirling after Western Michigan had put up 261 yards on the ground, especially when the Cardinal averaged 13.8 yards per rush in their opener against Rice. Could the Trojans stop the Stanford ground game? Would Clancy Pendergast make the necessary moves to control the line of scrimmage? The answers came back with a resounding yes and it started up front with a dominating effort from the defensive line. Green showed why he can be a next-level type of player. Fatu had a sack and two tackles for loss. Malik Dorton and Christian Rector provided solid minutes.

The triangle of the front seven came through with Nwosu, Gustin and Smith. I don’t recall too many times when an OLB had 5 pass break-ups in a single game but Uchenna did it in this one, and he did it with Ronnie Lott (the ultimate #42) in attendance. Gustin added four tackles of his own while Cam Smith led the way with 8 tackles for the USC D.

In the secondary Jackie Jones and Chris Hawkins each had 6 tackles and I was especially glad to see that from Jackie, he was sticking his nose in there and came up with some timely stops. Iman Marshall added three pass break-ups of his own.

As for the USC offense, it was just a terrific all-around game. You can start with Sam Darnold, who connected on 21-26 passes for 316 yards with four touchdowns in a very “Sam”-like effort. Sure there were a couple picks but that doesn’t deter from the way he kept plays alive and threw some very accurate balls. And his chemistry with Deontay Burnett was in fine form as Deontay had 9 catches for 121 yards and two touchdowns, while Steven Mitchell continues to impress in his return from a knee injury with four catches for 94 yards and a pair of scores of his own.

Then there was the running game. The glorious Trojan running game that featured a 1-2 punch, along with a 3-4 punch as well. Ronald Jones was the workhorse while showcasing the tough running that we’ve seen from him this year. RoJo had 23 carries for 116 yards and two touchdowns. Stephen Carr, once again, provided some excitement with his 52-yard run (11 carries for 119 yards) and a shake move on a screen pass that left a defender grasping for air, the 2nd time he’s done that in two weeks. You’re starting to hear the national media ask if the Trojans have the best 1-2 RB combo in the country, and it’s hard to argue that point so far. But let’s not forget what we saw from Vavae Malepeai and Aca’Cedric Ware. Vavae added 49 yards on 6 carries of his own and he was a load of power at 225 pounds. Ware had 3 carries for 16 yards, a solid contribution averaging 6 yards a pop.

And of course, you don’t run for 307 yards and only give up one sack for one yard unless the offensive line is doing their job. Major kudos to the guys up front for the job they did all night.

It was also a good reflection on Helton and his staff. This was the second time they have answered the call against an opponent that was offering a physical test (Washington last year) and both times the Trojans were up for the challenge and came away with an impressive win. That bodes well for the future, and the present.