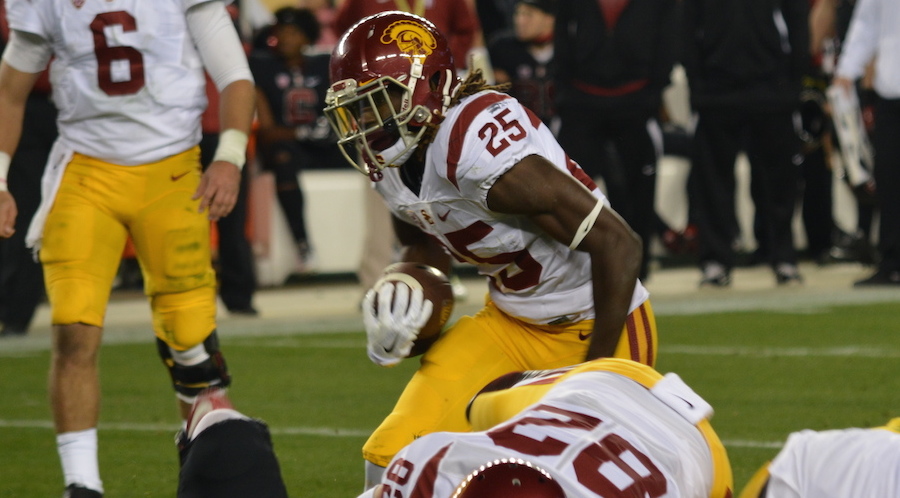 It was a night when legendary Trojans such as Ronnie Lott, Marcus Allen and yes, even Reggie Bush, were on the field prior to the game for a celebration of the Pac-12 All-Century team.

The mood was good with Lott and Allen giving their endorsement of newly promoted full-time coach Clay Helton, and Bush firing up the team with an unexpected locker room appearance in his home NFL stadium.

By the time the night was finished, however, the results showed an accurate portrayal of where the Trojans are at right now compared to the type of teams Lott and Allen eventually want to see. It was a Trojan team that got behind early, got momentum turned thanks to a big play by a freshman defender, actually took the lead late in the third quarter, and then saw momentum turn back to Stanford with a sack and forced fumble by Cody Kessler that was returned for a score.

And along the way, of course, there was the Christian McCaffrey factor. You simply can’t discuss this game without tipping your hat to the performance by McCaffrey, who gained 461 all-purpose yards, scored touchdowns in three different ways (rushing, receiving, passing) and made an impressive final statement in his bid for the Heisman Trophy.

The scoreboard showed a final score of 41-22, which looks like a comfortable Stanford victory, but in reality this was a very competitive football game for much of the night, especially after the Trojans overcame another slow early start (at one point Stanford was outgaining USC 197 yards to 18) and got back into the game by running the football. Unfortunately, it wasn’t a consistent enough effort, and it came up short when McCaffrey and the Cardinal weren’t missing on too many opportunities.

And in terms of where the USC program is at right now, things just aren’t settled enough to get the win in those situations.

There was certainly good, but for every Porter Gustin sack on a goal line stand, there was an Olajuwon Tucker getting beat by McCaffrey in one-on-one pass coverage. For every Ronald Jones touchdown run, there was Nico Falah getting beat on the Kessler sack fumble. It’s not to single out Tucker or Falah, but just to point out that both players were buried on the depth chart as of a few weeks ago, and have been pressed into action at unfamiliar spots, and the Cardinal took advantage.

In the future, when Helton has had more time to implement his schemes, choose his coaches and build roster depth, you have to imagine the Trojans will be that much more prepared to handle that type of adversity.

For now, however, it has to be enough that the Trojans got to this point, that Helton was able to implement enough of his plan to get the USC ship righted in the middle of the season to advance to the championship game. And make no mistake about it, now that there has been a taste of the game, the expectations are that the Trojans will be returning often in the future, especially if you listen to the reasons Lott and Allen give for why they support Helton as coach.

They talk about returning to the USC traditional style of football, something Lott said Stanford has “borrowed” in recent years. They talk about Helton establishing a culture within the team that they like, and that they have seen progress since he took over. Did that progress lead to an ultimate goal of advancing to the Rose Bowl? No. But you pay attention when guys like that say they like the direction of where the team is going.

Now it will be up to Helton to deliver on that promise. The Trojans will likely be headed to the Holiday Bowl, which means extra practice time and one more chance to show improvement. Then there will likely come some staff changes, and the final stretch of recruiting.

One thing it won’t include is a 2015 Pac-12 title. It would have been nice to get the win but you get the sense the Trojans will be back soon, and they will be even more prepared next time.