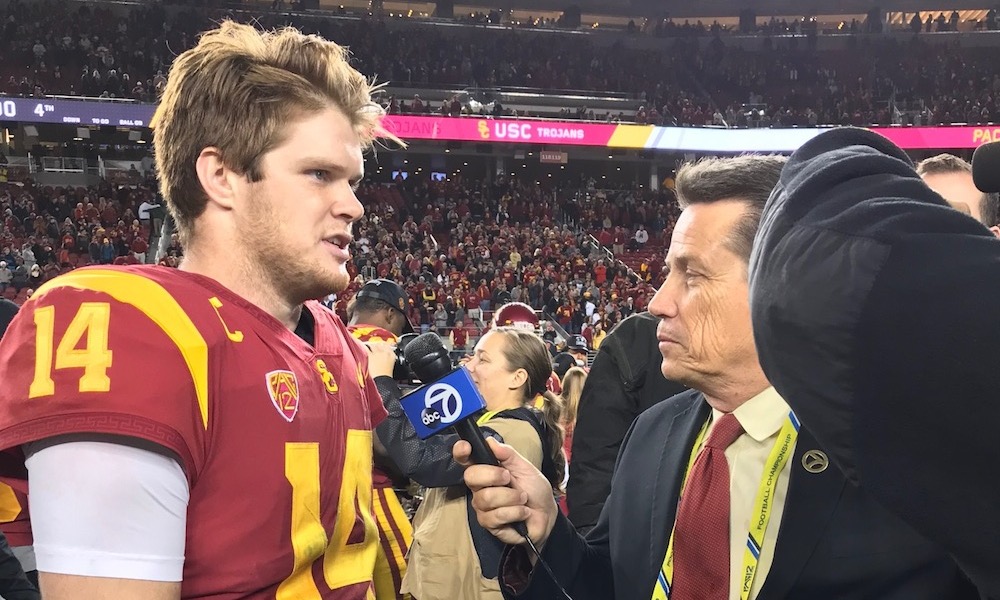 In so many ways it was a fitting way for the Trojans to capture their first conference title since 2008, in a game against the program that has become their biggest conference foe in that time, one who brought a physical style in a game that wasn’t always easy and came down to a critical momentum swing featuring a dramatic USC goal line stand.

If you’re going to talk about this game, you can talk about individual performances from guys like Sam Darnold, Ronald Jones, Michael Pittman, Uchenna Nwosu, Chris Hawkins and others but for me it comes down to the final stretch of the fourth quarter and a goal-line stand, a magical play from Sam to Pittman that lead to a score, and a decision by Clay Helton to go for it on 4th down to close out the game, which the Trojans did.

To set the stage for the goal line stand, the score was 24-21 and despite the fact that the Trojans held a comfortable stat advantage through the game the Cardinal had kept it close and now things got shaky after back-to-back possessions where the Trojans fumbled the ball and had a shanked punt that gave Stanford great field position at the USC 33. Predictably they ran the ball and got to the Trojan two-yard line, facing a third and goal. This was it, goal-line stand time against what Clay Helton later called “one of the best short yardage run teams there is.”

Stanford came out in their jumbo set, a compilation of offensive linemen, tight ends and a fullback that makes no bones about what they’re doing. On the 3rd down play, it was a run up the middle from Cameron Scarlett, who got one yard before being brought down by a gang that included Christian Rector and Liam Jimmons, among others. Victory on that play to the Trojans and it set up a 4th and goal from the one. Would David Shaw kick a field goal? Stanford was only down by 3 and you can certainly make an argument to play it safe and tie the game, but that’s not what Shaw did, he went with Scarlett up the middle again and this time it was Nwosu getting the first contact and bringing him down short of the goal line.

There’s just something about a classic goal line stand that brings out the emotion and the Trojan defense was fired up after that stand, deservedly so. The only problem was that the ball was still at the SC one, and after a short RoJo run, Sam dropped back into the end zone, had to step up into the middle of a pair of Stanford defenders crashing down, and delivered a ball downfield to Pittman that eventually went for 54 yards. It was vintage Sam improvisation, and another big play from Pittman on a day when he set a Pac-12 title game record for receiving yards.

The Trojans eventually scored on the drive with a RoJo run to make it 31-21 but, of course, this one wasn’t over yet as Stanford responded with a 90-yard TD drive of their own that ended with another high point completion to their TE, something that we knew coming into the game would be a problem with their tall receivers, and it was.

So now the score is 31-28 with just over 2 minutes left and Stanford is going to make the Trojans earn this one all the way to the wire. An on-side kick attempt doesn’t work, and if USC can run out the clock they will be conference champs but at 4th and 2 Clay Helton was faced with a decision, and he chose to throw the ball in the flat to a freshman tight end. The play worked, Josh Falo went for 15 yards and the celebration began. I loved that Helton went for it in that situation, put the ball in Sam’s hand to close the game out, don’t take chances with Stanford getting the ball back.

That sequence of events provided a memorable way for the Trojans to finish the game but there were other keys as well.

We had talked coming into the game about how the USC receiver group was much different than the first meeting with Stanford, as Vaughns, Pittman and Daniel Imatorbhebhe did not have a catch between them in September, but in this game that trio combined for 11 catches, 220 yards and two touchdowns. This was especially critical when you consider Deontay Burnett (who had 9 catches, 121 yards and two TD’s in the first meeting) only had one catch for nine yards in this one.

Hawkins, who was playing in the game only a day after his grandmother passed away, led the Trojans with 11 tackles (nine solo) including a key TFL prior to the goal line stand, and a beautiful adjustment on his angle to track down Bryce Love on a long run.

How about Jordan Austin, a reserve offensive linemen who has taken few reps in his career yet he was thrown in there after Andrew Vorhees left, and held his own with only one false start.

And for the USC coaches, who have taken their share of criticism this season, it was a night of 500 yards on offense while holding Stanford under 350, all while both teams battled a typical performance from the conference referees, and to come away with the Pac-12 title is something that even Lynn Swann noted after the game as an important building block for the program.

Now the Trojans await their bowl fate on Sunday, most likely a trip to the Fiesta Bowl, which is certainly a fine bowl, even if this old-school USC fan feels like a trip to the Rose Bowl is in order when you win the conference title.

Congratulations to the Trojans, 2017 Pac-12 champions.