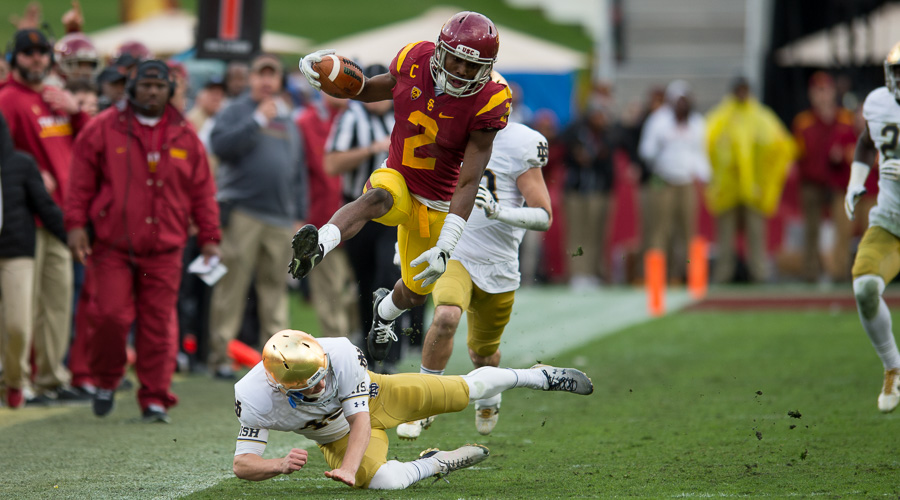 The USC vs Notre Dame rivalry is one where memorable plays are made and individual players are remembered for what they did in this game, and we’ve got another entry into this rivalry lore with what Adoree’ Jackson did on Saturday in the 45-27 USC win.

Jackson simply dazzled the crowd with 291 all-purpose yards and three touchdowns in three different ways, none of which involved him on the defensive side of the ball. Instead, he scored on a pass reception, a kickoff return and a punt return.

His first real impact came when he ran for a tough first down on the drive that ended with the Ronald Jones touchdown run. Next came a strange sequence when the score was only 10-7 USC in the second quarter. Notre Dame was punting from deep in their own end, the snap sailed past the punter out of the back of the end zone for an apparent safety. The officials ruled that the ball had not been put in play yet so Notre Dame had to punt again, and Adoree’ made them pay with a 55-yard touchdown.

The next two Adoree’ plays were examples of him responding to adversity by making something happen. First came a fumble by Adoree’ on a punt return which the Irish converted into an early 3rd quarter touchdown. Adoree’ just went out on the next USC possession and took a short Sam Darnold pass and raced 52 yards for a touchdown. Later Adoree’ gave up a Notre Dame touchdown pass, so he promptly took the next Irish kickoff back 97 yards for a score.

It was the type of performance that showed all of Adoree’s athleticism on full display. He was hurdling potential tacklers, finding a different gear to elude defenders and circling the field before fielding a punt in an effort to get the crowd pumped up. And the more he did, the more fired up the crowd got on this rainy afternoon, and by the end of the day they were serenading Adoree’ with chants of “one more year” as he stood on the sideline and soaked it all in with appreciation. It remains to be seen if Adoree’ will return for a senior year but if that was the final memory of him in an SC uniform he sure made it a special one.

And Adoree’ wasn’t the only one making plays on this day. It was actually a game that turned on big plays and special teams rather than the Trojans putting up huge offensive numbers as they’ve done in recent weeks while limiting opposing offenses. The stats were fairly similar for both teams with total yards (USC 412, ND 408), time of possession (USC 31, ND 29) and both teams had 23 first downs.

Ajene Harris provided a highlight play when he read a DeShone Kizer pass into the flat, stepped in front for the interception and returned it 33 yards for a score. For a young man who played at Crenshaw it had to be a huge moment to do that in the Coliseum against Notre Dame. And Ajene had another big play when he aggressively knocked away a backwards pass attempt for the Irish.

Special teams were impactful, not just with Adoree’s returns in a good way but with the fumbled punt and a roughing the punter call against Michael Pittman as well. But one of the biggest reactions from the USC sideline came when Matt Boermeester came down on a kickoff and absolutely leveled the Irish ballcarrier right in front of the Trojan bench. It’s not often you see a kicker lay a hit like that and his teammates definitely celebrated Boermeester on that one.

There were other USC performances of note including Ronald Jones (134 rushing yards on the day to push him over the 1,000 yard mark on the year), Sam Darnold (205 passing yards, 2 TD’s and no turnovers) and Cameron Smith (led the team in tackles with 10).

We also saw some unfortunate actions from Notre Dame defensive lineman Jerry Tillery. The first came after Aca’Cedric Ware had taken a hard hit from an Irish safety, a hit that was later ruled to be targeting. As Ware laid on the ground motionless it was a serious moment, and Tillery decided to deliver a little kick to Ware’s head as he went by. It wasn’t a big kick, more of a glance with his foot, but it was enough that his teammates nearby noticed it and immediately came over to get him away. Just an utterly classless move by Tillery but he wasn’t done yet, he later stepped on Zach Banner’s foot after a play was over while Banner was on his back on the ground. Ware hadn’t been able to defend himself but Banner had no such issues and he quickly got to his feet and let Tillery know it wasn’t appreciated. Those were two plays that crossed the competitive line in a great rivalry series.

When the game was over, the Trojans quickly shifted their attention to the Utah vs Colorado game in Boulder with hopes that a victory by the Utes would send USC to the Pac-12 title game, but that didn’t happen. So that means USC ends the season at 9-3 with an 8-game win streak, and the knowledge that they beat both their rivals, didn’t lose in October or November, and they didn’t lose in the Coliseum. That’s a lot to be proud of.

Now the Trojans will have to wait until next week to find out the bowl pairings, and the destinations being mentioned most often involve the Rose Bowl, Cotton Bowl or Alamo Bowl. In the meantime, there will be some basking in the glow of what we saw on a special day in the Coliseum, where a special player put on a special performance that will be remembered for years to come.