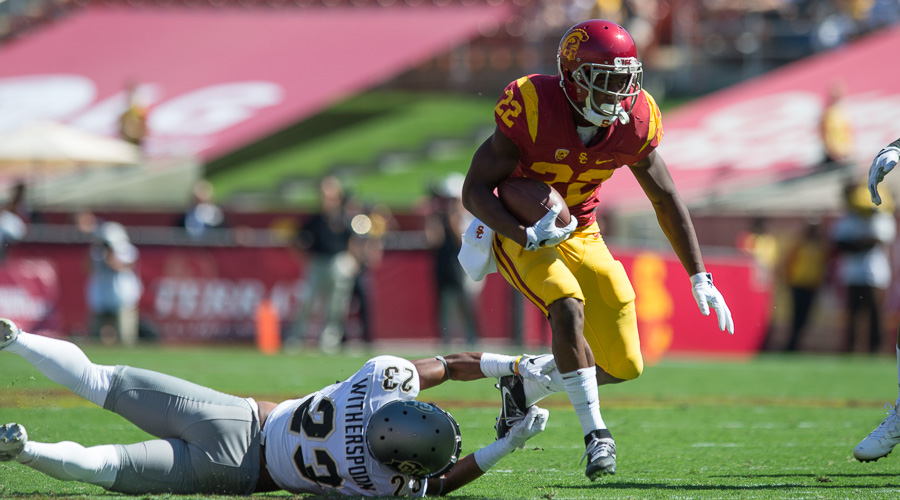 The victory over Colorado gave us another productive day from Sam Darnold (although with a couple miscues as well), a bunch of touchdown throws to tight ends, another look at the increased pressure from the defense, and some timely big plays from the usual suspects such as Adoree’ Jackson and JuJu Smith-Schuster, along with the biggest play from Darreus Rogers.

The turnovers from the USC offense (4 total, 3 fumbles, 1 pick) turned what should have been a decisive Trojan and made it one that hung in the balance until the final minutes, but the Trojans came away with the win and are now 3-3 with some momentum as they head on the road to Tucson next weekend. That’s the good news.

The potential bad news is the injury update on Justin Davis, who suffered a high ankle sprain against the Buffaloes, according to coach Clay Helton.

Davis was in the midst of putting together his 3rd straight 100-yard game when he left against Colorado (he had 13 carries for 83 yards) and he’s been a big part of the resurgence on offense as a complement to Darnold and the passing game. Davis has been running with the kind of energy that really helped set the tone and he has also been effective as a receiving option and a pass blocker. That type of all-around game, and the senior leadership he has provided, will be sorely missed if he is forced out of any action, especially as the Trojans are trying to find their way in a suddenly open Pac-12 South race.

“Obviously a high ankle sprain for a running back is a hard thing,” Helton said. “We’ll see how he is as we go through the week to monitor him.”

It’s not like the Trojans don’t have other options, however. Ronald Jones, who set the USC freshman season mark last year, will get the first shot at stepping into the starting role, although he has struggled to get things going so far this year. RoJo got some additional carries yesterday after Davis went down and ended the game with 10 carries for 56 yards, and it was the closest we’ve seen in terms of being the “old RoJo” with his explosive running style.

We also figure to see more of Aca’Cedric Ware, and he brings a physical option that can work between the tackles. There could also be some reps for Dominic Davis, and perhaps Adoree’ Jackson gets a few snaps in the backfield as well.

The timing of the Davis injury will be interesting to see how it impacts the USC offense that has been in such an attacking mode under Darnold. Tee Martin seems to have found more of a rhythm in recent weeks, the ball is being spread around, and the offensive line has put together a couple solid outings in a row. This is not the ideal time to be throwing any wrenches into the mix such as an injury to the starting tailback but it is what it is.

One thing that the Colorado game showed is that there is no shortage of USC playmakers who have the ability to step up with the game on the line these days.

The play by Rogers was the key to salvaging the game, as the score was tied 14-14 in the fourth quarter following a Colorado score. Darnold basically threw the ball into a coverage situation, some will say he gave his receiver a chance to make a play (which is true) but it was also a pass that looked headed for a pick, right up until the point that Rogers reached over the 6-3 corner and snatched the ball away. It was the type of play that represented the most physical nature of Rogers and his big hands.

The interception by Adoree’ was amazing in terms of his body control and awareness. His entire body was out of bounds when he caught the ball and yet he had the presence of mind, not the mention the sheer athleticism, to reach his right foot down in bounds to complete the play. He also added a couple nice returns on special teams but it was the interception which really stood out.

For Smith-Schuster, it wasn’t a dazzling physical play that he made to seal the game, it was an alert mental play that caught most everyone by surprise. With the Trojans up 21-17 and just over a minute to play, Darnold hit JuJu for a 25-yard gain down to the Colorado 14, and after eluding a defender JuJu had a clear path to the end zone for another touchdown. Instead, he slid. He knew that with only one timeout for Colorado, the Trojans would be able to run out the clock to finish the victory, so he voluntarily went to the ground instead of adding to his stat sheet, which tells you something about JuJu Smith-Schuster.

It was plays like that which allowed the Trojans to find a way to win the game, something that was not the case earlier in the year, and it’s clear that this team is different from the one that began the year struggling to put things together. So much of that change is attributed to Darnold, and rightly so, but there’s enough progress being seen across the board to think things are headed in a good direction.