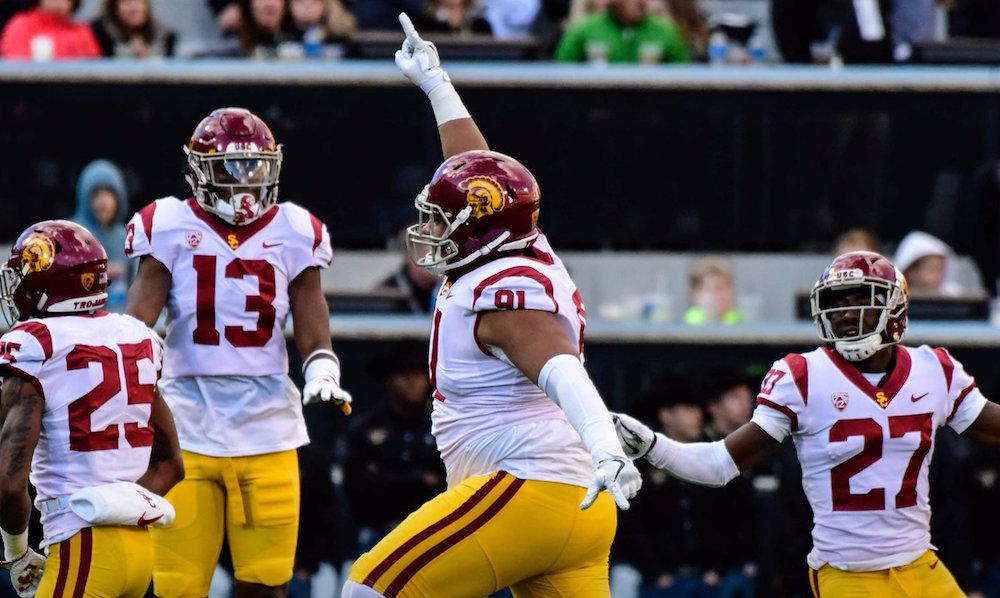 The Trojans clinched a spot in the Pac-12 title game on Saturday with a 38-24 victory over Colorado in a game that followed a familiar pattern for this 2017 USC team.

Things were a little sloppy in a scoreless first quarter but then the Trojans caught some offensive rhythm with a pair of Sam Darnold touchdown passes, and added another score before half when Ajene Harris had an interception that he returned for a score. By the time Darnold ran in a touchdown early in the 3rd quarter for a 27-0 USC lead it seemed like the game was well in hand but, as we’ve seen from this team before, nothing is ever as easy as it seems.

The Buffs struck with a pair of quick touchdowns and made it a 13-point game with a field goal early in the fourth, but that’s when the Trojans turned to Ronald Jones and the defense to put the game away. Jones would carry the ball 8 times in the final quarter for 49 yards and a touchdown (which featured a terrific cutback) while defensive standouts included a 3rd-down pass batted down by Uchenna Nwosu (his 11th of the season), another interception by Ajene (which was almost turned into a score) and a pair of back-to-back plays to keep Colorado out of the end zone by John Houston to end the game.

So the important thing coming out of the game is that the Trojans are 9-2, 7-1 in conference and will face the Bruins next Saturday, take a much needed week off over Thanksgiving, and then make a trip to Santa Clara on December 1st to try and earn the first conference title for the school since 2008.

In the meantime, there will be a lot of discussion about this team and the need to play a complete game, a lack of killer instinct or “shooting ourselves in the foot”, as Clay Helton calls it. Because for all the good that this team can show (and there is a lot of it), there is also the pattern of not being able to put games away, of committing too many penalties, etc.

To use this game as an example, here are some of the things that went right:

* Sam Darnold: Sam made some big time throws (21-34, 329 yards, 2 TD, 1 TD run) and in his last 6 games he has 15 TD’s and only 3 picks.
* We now have a top 4 WR group: With the recent emergence of Pittman and health of Mitchell there are four legit receivers that Sam is throwing to, and they caught 19 of his 21 balls yesterday.
* Holding Phillip Lindsay to 68 yards: The Buffs biggest weapon was kept in check.
* No turnovers: there were two fumbles but both bounced right back to the USC player
* Ajene Harris: 2 interceptions (one pick-6) and a big (legal) hit on Ross. Other secondary stars – Isaiah Langley (9 tackles, 2nd on team), Matt Lopes (TFL and huge special teams hit)
* 2 blocked kicks by a pair of true freshmen: Kudos to Brandon Pili and Austin Jackson
* RoJo: He had 25 carries for 142, 1 TD (great cutback) and moves into 6th on all-time USC rush list
* John Houston – led team in tackles again (11), 2 big plays at end – pass break-up in end zone and TFL

And here are some examples of stepping on our own toes:

* Penalties: Once again penalties were an issue with 9 for 79 yards. The call on Vaughns but unsportsman-like spinning of the ball seemed weak but the ones against Chuma and Jackie Jones were hard to argue.
* Missed FG: Hard to fault McGrath with the injured groin but still a missed opportunity to not get points on a good opening drive
* Outscored in 3rd Q for 5th straight game. The Buffs never really threatened closer than 2 touchdowns but it made the game closer than it needed to be toward end
* Clock management/play calling after 2nd Harris pick at end: There has been a lot of criticism about play calling, but I’ll specifically cite this series as hard to understand. A couple incomplete passes, a TFL, and :22 off the clock.
* Jackie Jones: Tough night for Jackie with key penalty and getting beat. The second game in a row that Helton had to pull him to the sideline and miss a play due to a need for a talking-to.

Shaun Cody talked on the post-game radio show about a lack of killer instinct in this team, the mindset to execute no matter what the score is. It’s all part of a growing process to become a dominant team and they haven’t got there yet. Darrell Rideaux had talked early in the season about the adversity the team had faced and how it would make them stronger mentally, which goes hand-in-hand with what Cody is saying.

I think many Trojan fans were hoping that growth would lead to a similar rise in play to what we saw last season as the year went along, and while that may not have happened, the results are still to be enjoyed. This program is at a point where the opportunity to play for conference championships feels right again. We’ve been forced to sit on the sidelines and watch due to sanctions, and it our one previous visit to the game it just wasn’t the right time yet coming off those sanctions, or with the right coach.

It feels right now. Yes, we’ve still got the Bruins to focus on and we will turn our attention to them soon enough. But for now I’m definitely going to take a moment to acknowledge the next step in returning the USC program to the the rightful place in the college football landscape, and that starts with Pac-12 titles, something that can’t happen until you get to the title game, and the Trojans will be there.