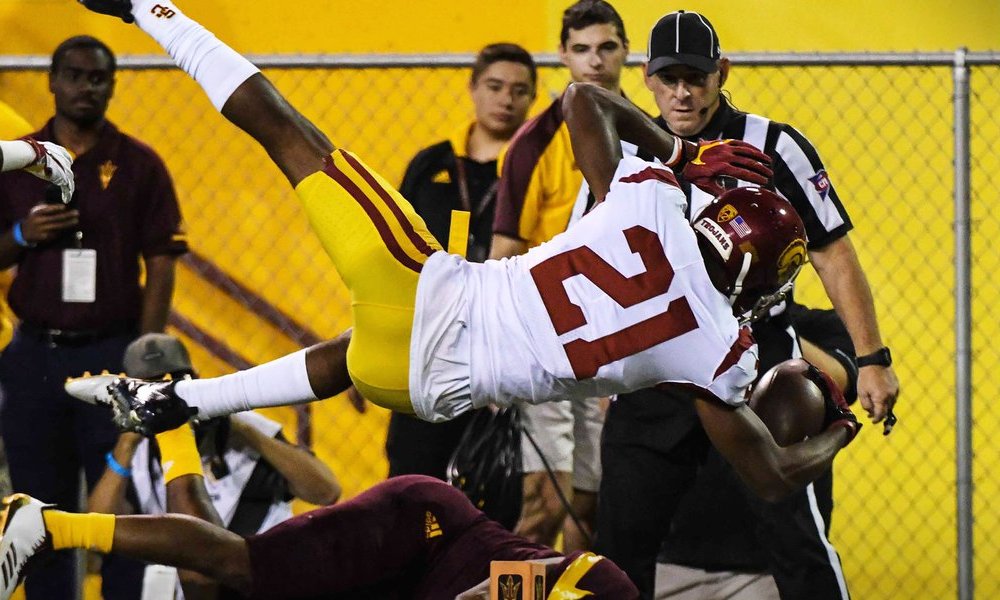 It was a USC team that needed to show a response to what had happened last week, to come out playing inspired football against a Sun Devil team that seem prepared to give the Trojans all they could handle.

If that was your measuring stick heading into the game then you had to enjoy what you saw because the Trojans came out strong from the start, took the ASU homecoming crowd out of it right away, and cruised to a dominating 48-17 victory that showed so many flashes of how good this team can be.

First of all, give credit where credit is due for the response. The mood around the Trojan program after the Notre Dame loss was at a level that we don’t see often with fans, media and former players asking pointed questions about the state of the team, but Clay Helton stuck to his plan of getting back on the practice field and addressing mistakes rather than, as he said, throwing out the plan because of one bad game.

On this night, the coach was correct in his approach because his team put together a performance where they didn’t turn the ball over, they stuck with the run even when Darnold was having success through the air, they never let the Sun Devil offense get on track and, most importantly, the Trojans controlled both sides of the line of scrimmage. It was certainly the most complete game of the season since Stanford, and you could argue this one was more important because of what was at stake for the remainder of the year, and because of the lingering aftermath of Notre Dame.

Let’s talk defense first, with a lot of credit to be passed around. Clancy Pendergast put together a terrific scheme with two new starters (Iosefa, Langley – 6 tackles) and he also benefited from the timely return of Josh Fatu and Porter Gustin, as well as the absence of ASU running back Kalen Ballage. It was unclear going into the game how much Fatu and/or Gustin would play, and their actual stats weren’t much (Gustin had one solo tackle, Fatu none) but Josh was able to provide a second option along with Brandon Pili at nose, which helped solidify the middle, and Gustin made his impact clear on a pair of 3rd downs when he pressured the QB to step up into the arms of Rasheem Green for two sacks. Green added a 3rd sack, and Uchenna Nwosu had three sacks of his own, for a total of six sacks on Manny Wilkins. Wilkins only passed for 259 yards with 70 of them coming on one play to N’Keal Harry.

On offense, things couldn’t have gone much better. There was a touchdown march on the opening drive to make it 7-0, a beautiful dive into the end zone by Tyler Vaughns to make it 14-3, and a terrific pass/catch from Darnold to Vaughns where Tyler got popped and hung on to the ball. We saw some run after catch from Tyler Petite and Michael Pittman. We saw 9 plays of 20 yards or more, from a team that had only given up 2 plays of 20+ in the previous two games, and we saw over 600 yards of total offense.

No doubt Darnold was a big part of that with three touchdowns but I also appreciated the way the Trojans stuck with the commitment to the run game in the first half. The USC o-line was doing their part, with an assist in the blocking department from Daniel Imartorbhebhe, although the most memorable block on the night belonged to Steven Mitchell for his glide block to help spring a RoJo touchdown. For RoJo it was one of those nights where it was simply working, with a pair of 60+ yard TD runs, and over 200 yards rushing on 18 carries. There was also good distribution for Vavae Malepeai (11 carries, 68 yards), and a 39-yard designed run from Darnold as well.

It all resulted in smiles on the faces of the Trojan players late in the game with victory in hand, and Helton talking after the game about he had stressed to his team in a Friday meeting the need to have fun, to drown out the noise and to appreciate the games they have left together as a team while chasing a conference championship. Those words could be taken by the coach himself, who has worn the weight of this season and seemed notably more relaxed after the big win.

Of course, the 24-hour rule will be in effect to enjoy the victory because the Arizona Wildcats will be coming to town next Saturday in the latest battle for the top spot in the Pac-12 South, but the Trojans could not have done more to turnaround their momentum than by what they showed in Tempe.