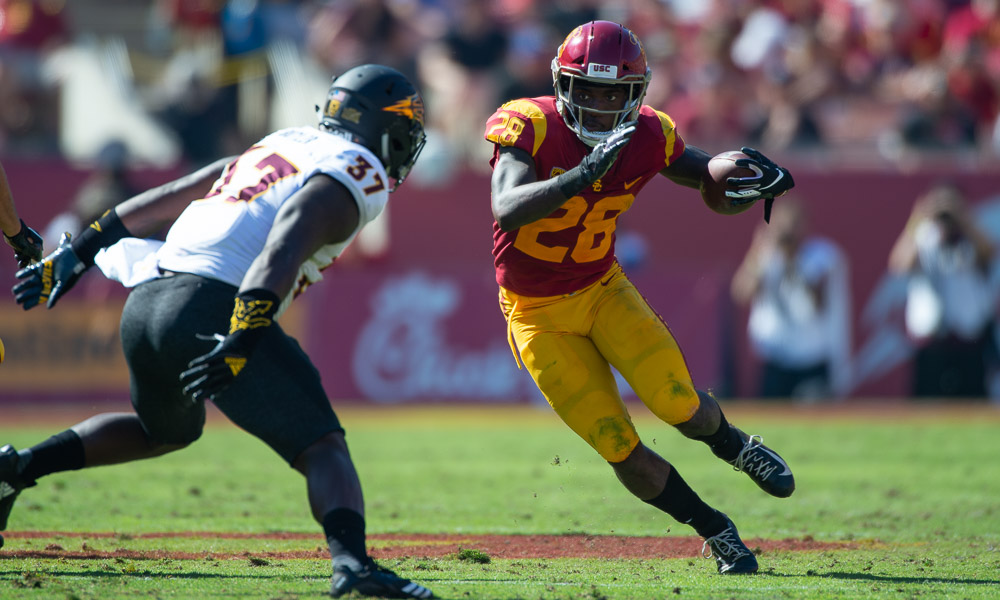 The shame of it is, there was a lot to like about this football game for the Trojans.

You had a 3rd string quarterback in Jack Sears who suddenly got a chance to start a football game, and it took him about a half to get adjusted, but once he did he played a pretty good brand of football and put his team in a position to win.

You had a true freshman starter at safety in Talanoa Hufanga who led the team in tackles with 11, and also added 2.5 tackles for loss and a pass break-up, but then we get the news at the end of the day that Hufanga broke his collarbone and is out for the remainder of the year.

You had Tyler Vaughns contribute a punt return touchdown, a touchdown throw and a touchdown catch, but there will be memories of the ball he dropped in the end zone (on a well-thrown ball from Sears) which led a few plays later to the long punt return for a touchdown from N’Keal Harry.

You had the USC defense playing without all three defensive captains, as Porter Gustin, Cameron Smith and Marvell Tell all were out of action due to injury so it was guys picking up the slack like Hufanga, John Houston and Ajene Harris (7 tackles apiece, each while shifting to a slightly different spot to adjust for Smith and Tell being out).

Of course, none of that matters as much when you take the loss 38-35 and fall to 4-4 on the season with all kind of speculation about Clay Helton and his future job prospects with the Trojans. The fans certainly spoke at the turnstiles. It was a beautiful, sunny fall day at the Coliseum against an Arizona State team that wasn’t a world-beater but still a good Pac-12 football game, yet the smallest announced Coliseum home crowd (47,406) since 2001 against Oregon State was announced.

So what does that mean moving forward? The big wild card is that we have no idea what Lynn Swann’s management style is when it comes to dealing with coaches under pressure. We didn’t know Pat Haden’s style either, and it turned out he produced one of the more memorable firings in college football history with the tarmac dismissal of Kiffin. We have no idea if Swann is looking to dismiss Helton, or to look at some assistant coaching changes, or to keep things status quo. Swann has never been in this position before, but you have to imagine when the USC regular season ends after the Notre Dame game that there will be the possibility for some kind of movement. At least there figures to be.

Because not only is Helton sitting with a .500 record this year but there is the added element of being in a renovated Coliseum next year. USC has pledged north of $300 million for their shiny new Tower toy and they aren’t going to be looking to have it 2/3rd’s full. And a quick glance at the Rams game today against the Packers shows that there are no problems filling the place when there is good football being played inside (and Pete Carroll forever proved that to anyone who was paying attention).

That means four more games, two more at home, for Helton to make the case for him and his staff. It remains to be seen who he might have at quarterback, or how many veterans will be available on defense, but the combined record of the three conference teams is 9-15, so there is the opportunity to do some good (Notre Dame is 8-0 so we will deal with them when the time comes).