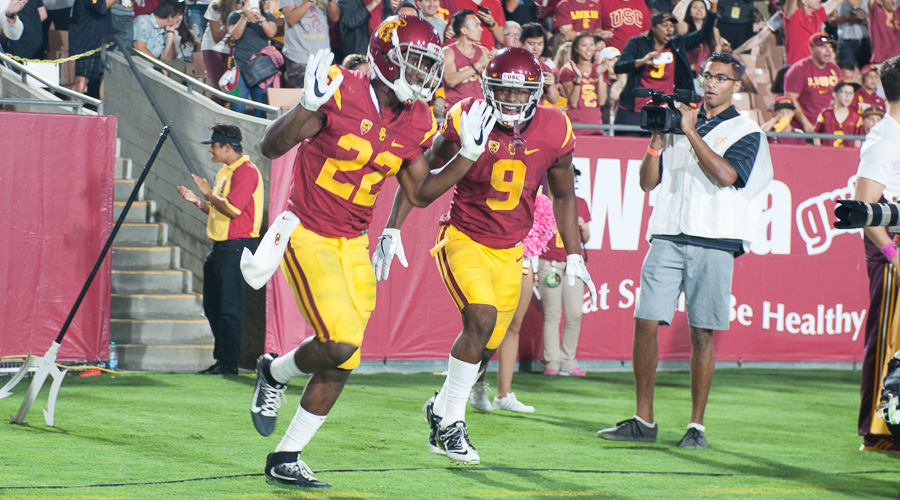 The Trojans needed that win.

After starting the season 1-3 there just wasn’t more this team needed to do than go out and get a win, and they put together the most complete performance of the season for a resounding 41-20 victory that was basically a 41-6 win since the Trojans pulled their starters before a pair of late ASU scores.

Things started off a little shaky with the Sun Devils driving for a field goal on the opening drive, and then Clay Helton making the decision to go for it on a 4th-and-2 at the Trojans 42, a conversion attempt which failed. It seemed an odd call to make, one that felt like a response to criticism made the previous week when the decision was made to punt.

No matter the reason, the ball was turned over in great field position to a Sun Devil offense that had been averaging 48 points per game with a chance to take a double digit lead just minutes into the game. Instead it was a Trojan defender making a play (the kind of play that didn’t get made against Utah on 3 straight late touchdown drives) as ASU quarterback Manny Wilkins tried to strike for a big play immediately but Jonathan Lockett made a twisting interception at the USC 5-yard line for the timely turnover.

It was then that Sam Darnold and the Trojan offense took over, first with a 3rd-down conversion throw out of his own end zone to JuJu Smith-Schuster, then with a 49-yard touchdown run from Justin Davis, and finally with a short touchdown throw to Smith-Schuster. Rather than the score being 10-0 in favor of the Sun Devils, it was now 7-3 and the Trojans were on their way.

It was another example of something we’ve seen from Darnold in his first two starts in terms of responding to adversity. Last week it was three fumbles to open the game and he responded by leading four straight scoring drives, this time it was a failed fourth-down conversion followed by a possession backed up to his own end zone, and he responded with an 8-play, 95 yard touchdown drive. He also showed his poise by throwing the ball away in the end zone instead of taking a sack for a safety, then hit JuJu on a 3rd-and-10 for a first down while throwing from the end zone, That’s a nice pattern to see from a young quarterback and yet Darnold looks completely comfortable doing it.

On the day Sam was 23-33 for 352 yards and 3 TD’s. He has obvious chemistry with JuJu, who doesn’t seem to have any problems getting the ball these days, and there is a good connection with Deontay Burnett as well. There was the poise on a broken flea-flicker where he simply picked up the ball and completed the pass. We also continue to see him get good production downfield as five different receivers caught passes for 21 yards or more in this game. Granted, the ASU pass defense has not been strong but those are nice numbers no matter what.

It was also the 2nd straight 100-yard rushing game from Justin Davis, who had 123 yards on 14 carries, including a diving effort for the pylon that fell short but showed the kind of passion and effort that he is playing with these days.

For the USC defense, the game was expected to be a gut check response to what happened against Utah, and you have to consider the test passed with flying colors with an unexpected showing of pressure and blitzes that resulted in 3 sacks and 6 tackles for loss. The Trojans did a great job of never allowing Wilkins or the Sun Devils offense to get their timing, which is something that hasn’t always been easy to do in recent years, and there was better communication (a point of emphasis this week in practice) that didn’t allow for the breakdowns we’ve seen this season.

Lockett was certainly one of the keys with his timely pick, and he added a fourth-down pass break-up later in the game along with tying for the team lead in tackles with Adoree’ Jackson (5). Rasheem Green also made a strong showing in the middle of the line.

It remains to be seen what kind of impact this game could have because this is a team that is still sitting at 2-3 with plenty of challenges remaining on the schedule, starting with the Colorado Buffaloes who come to town with a lot of momentum and looking to make a statement that they are ready for more in the Pac-12. There would be no better way for them to show that than by beating the Trojans in the Coliseum.

But there is a tangible energy that has come over this USC team ever since Sam Darnold took over at quarterback and that is the wild card in terms of where things will go for the rest of the season.  The Buffs will be seeing a Trojan team playing with a bit of a bounce in their step, and they will be in front of the home crowd once again, one that will be a good mood after what they saw this weekend. Winning a game can do that for you.