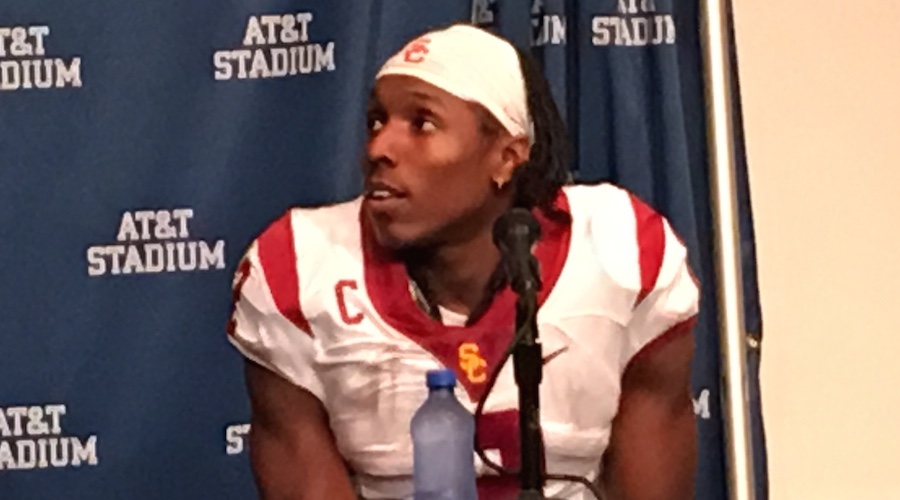 In fact, you have to go back 50 years to the 1966 51-0 loss to Notre Dame to find a game when USC lost in a similar scope to what happened last night in Dallas.

The first thing I want to do is give respect to Alabama for the 52-6 outcome, the Tide are at the height of the college football mountain for a reason and they thoroughly outplayed the Trojans in every aspect. And similarly, the Alabama coaches had the answers they needed to take control of the game and run away with a victory that will resonate as part of the Trojan program for years.

That is one of the biggest takeaways from this game for me. There were many USC fans who were looking at the game as a measuring stick for where the Trojans stand in the new Clay Helton, post-sanctions era. The Trojan roster is as full as its been in years, and there was a lot of talk about a renewed emphasis on returning to the physical style of football that has been a foundation of USC football. With all that being the case, however, the answers provided at AT&T Stadium were sobering to say the least. And while it’s true that it was only one game and there are still 11 games left to go in the season, this wasn’t the kind of outcome that you simply sweep under the rug and move on from.

Things actually started off OK for the Trojans. The atmosphere in the stadium was electric and the Trojan Family traveled well with a lot of excitement for what they hoped to see. Max Browne hit a big pass on the first drive, Matt Boermeester converted a 47-yard field goal that would not have been good from 48, and the USC defense had some early answers for the Crimson Tide offense.

But as is so often the case, a key USC penalty, this one on punt coverage against freshman Michael Pittman, seemed to give Alabama the spark they needed to get things going, and a quick TD pass gave the Tide the lead midway through the second quarter, and from that point on it was an onslaught. There was a point in the game when Alabama rolled off 38 unanswered points (with a true freshman quarterback) and outgained USC 313 yards to 2.

This Alabama defense, which was heralded as the fastest of the Nick Saban era, was as good as advertised and simply gave no ground to an experienced Trojan offensive line. USC gained 64 rushing yards in the game, and 46 of them came on one run from Ronald Jones. The USC quarterbacks didn’t fare any better, as both Max Browne and Sam Darnold were given opportunities but couldn’t do much as they were under pressure all night. No stat better exemplifies the struggles of the USC offense better than the fact that JuJu Smith-Schuster was held to one catch for nine yards, and that didn’t come until the 3rd quarter when the outcome was well in hand.

Were there some bright spots for the Trojans? Sure. I thought the linebacker combination of Cameron Smith and Michael Hutchings played well, as did Porter Gustin. And Adoree’ Jackson certainly made his share of plays too. But in the end it’s not about trying to put a bow on this one to talk about what went right. The USC Trojans got out-executed in every way and there just isn’t a way to sugarcoat that.

Former USC greats such as Sam Cunningham, Anthony Munoz and Lynn Swann who were in attendance certainly didn’t recognize the results from when they wore the cardinal and gold, especially the apparent gap in the sheer physical style of play. And that reality is going to result in a serious examination of where things are at with the program, with nobody coming under the microscope more than Helton and his coaching staff in areas such as play-calling, time out management, unforced errors and composure.

The good news is that there is another game to be played in six days as the match-up against Utah State offers another chance to get on the field, and then Stanford after that, and Utah after that, and so on. The Trojans are in prove it mode now because talk isn’t going to mean much after what happened in this game. And while teams like the Cardinal are going to offer a physical challenge of their own, it’s hard to imagine the Trojans are going to face anything on the opposite side of the field like what they saw against Alabama.

Unfortunately, the results of that performance against the Tide are going to be remembered for a long time.