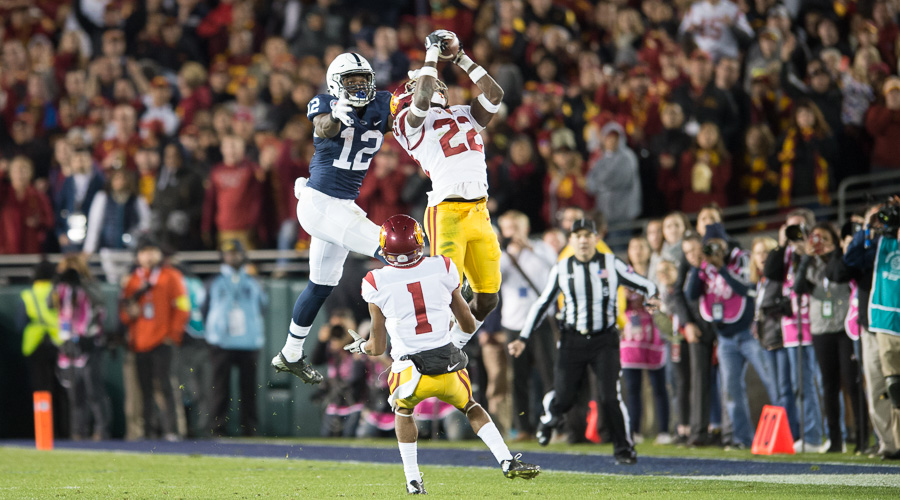 It was good to be back home.

It was good to see the pre-game flyover, to see the stadium filled equally with the colors of fans from the respective teams, to see Keith Jackson walking the press box hallways, and to have Trojan legends Ronnie Lott and Marcus Allen among those on the sideline.

More than anything, it was also good to be treated to one of the best Rose Bowls that any of us has ever seen.

The Rose Bowl game is more than just a patch on the jersey for the USC Trojans. It’s our bowl game “home-away-from-home”, a statement we’re able to make based upon the fact that the 52-49 victory over Penn State marked the 25th victory for USC in the Granddaddy of Them All, more victories than any other program in a single bowl game.

But it had also been a while, eight years to be exact, since the last USC appearance so there was definitely an appreciation and a bounce in the step of Trojans as they got ready for such a familiar setting. The game itself, however, was anything but normal.

There were 101 points scored, a new Rose Bowl record, and over 1,000 yards of total offense. There were dramatic swings of momentum, big plays on both sides, officiating controversies and, of course, a game-winning field goal as time expired.

Nothing represents the highs and lows of the game more than the USC defense. The first quarter belonged to the Trojans as there were a pair of early interceptions of Penn State quarterback Chase McSorley by Iman Marshall and Adoree’ Jackson, and a 13-0 USC lead as the Trojans held Penn State to 38 yards of total offense and only 4:26 time of possession. Needless to say, things were looking good at that point.

Then things turned in the 2nd and 3rd quarters when Penn State went on a run that saw them score touchdowns on seven straight possessions. It seemed like everything the Nittany Lions tried was working, and it did at one point when they score touchdowns on four consecutive plays. Not consecutive scoring drives, four consecutive plays! There was a touchdown catch by Gasecki at the end of the 2nd quarter, a long run by Barkley to open the third quarter, a long reception by Godwin and finally a short McSorley run.

It wasn’t something we’d seen happen to a Clancy Pendergast defense and it was stunning. It also put Penn State up 49-35 heading into the fourth quarter with some very worried looks on Cardinal and Gold faces.

But then things turned, and the Nittany Lions couldn’t do a thing in the final quarter against the Trojan defense. The final four possessions for Penn State included 3 three-and-outs and only 14 total yards. Michael Hutchings (who had a key late stop) said after the game that it was a pride thing, that Clay Helton had pleaded with the defense to make one play, to give the offense a chance, and that’s exactly what they did.

After the Trojans had tied the score at 49, the Penn State coaches elected to have McSorley trying to throw deep in a last-ditch effort to get a regulation win. McSorley is an impressive quarterback, very elusive, but downfield passing isn’t his strength and his first throw floated toward the middle of the field and Leon McQuay was almost able to make a critical pick but the ball was dropped. Fortunately for the Trojans, McSorley tried to come back to a similar play and this time McQuay wasn’t going to miss, he brought the ball in (the 3rd pick of the day against a QB who had only thrown 5 coming into the game) and ran it back far enough to give placekicker Matt Boermeester a chance to etch his name into USC Rose Bowl lore with a game-winning kick.

Boermeester, who had missed a pair of kicks earlier in the game, nailed it straight through the uprights and the Trojan celebration ensued. After the game, Boermeester was asked if he was worried about the length of the 46-yard attempt, he said “I knew I was going to get the opportunity to kick that field goal so it didn’t matter how long it was, wherever it was I was going to kick it”.

It was also somewhat of an up-and-down day for USC quarterback Sam Darnold. Don’t get me wrong, Sam won Offensive Player of the Game honors and deserved them with his Rose Bowl-record 5 touchdown passes and 453 yards on 33-53 passing. But for those who have watched Sam all year it wasn’t his most complete game by any stretch. There were a few shorted passes and some throws he normally makes, but he also had plenty of typical Sam moments including the 2-pt conversion throw to McNamara after he had slipped on his rollout, and his final scoring pass to Deontay Burnett was the kind of throw that has the NFL written all over it. And the two-minute drive to tie the game is the kind of moment that will bring a new generation of Sam Darnold fans who watched it unfold.

Speaking of Burnett, what a game for that young man, and he was just the latest in a string of USC “role” players who have stepped up through the year to help deliver USC wins. Against UCLA it was De’Quan Hampton and against ASU it was Jonathan Lockett with a huge interception. In this game Burnett had 13 catches for 164 yards and three touchdowns, while the duo of JuJu Smith-Schuster and Darreus Rogers combined for 12 catches, 175 yards and two scores.

Burnett certainly wasn’t the only one to step up and make a play. There was Stevie Tu’ikolovatu leading the team in tackles (8) and taking home Defensive Player of the Game honors, there was Rogers showing his strong hands again on a key catch, there was a 24-yard run by Justin Davis to get the Trojans near the goal line, and so much more.

And the Trojans needed every play, every yard to come away with this win because for a while there it seemed like one of those games where the breaks just weren’t going to go our way. There was a personal foul called against Uchenna Nwosu where it didn’t even look like he touched the quarterback, a fumble recovery by Stevie T was reversed, there was an ejection on Cameron Smith, Adoree’ left the game early with an injury and Marshall missed time with an ear infection/vertigo.

In the end, none of it mattered. The Trojans overcame it all. Helton said after the game that the university has a very unique motto, Fight On, and this team exemplified that. Did it ever. It’s been an amazing wild ride this year and it’s hard to imagine a better and more fitting ending than the one we saw in this game. USC Trojans, 2017 Rose Bowl champions. Enjoy it Trojan Family.