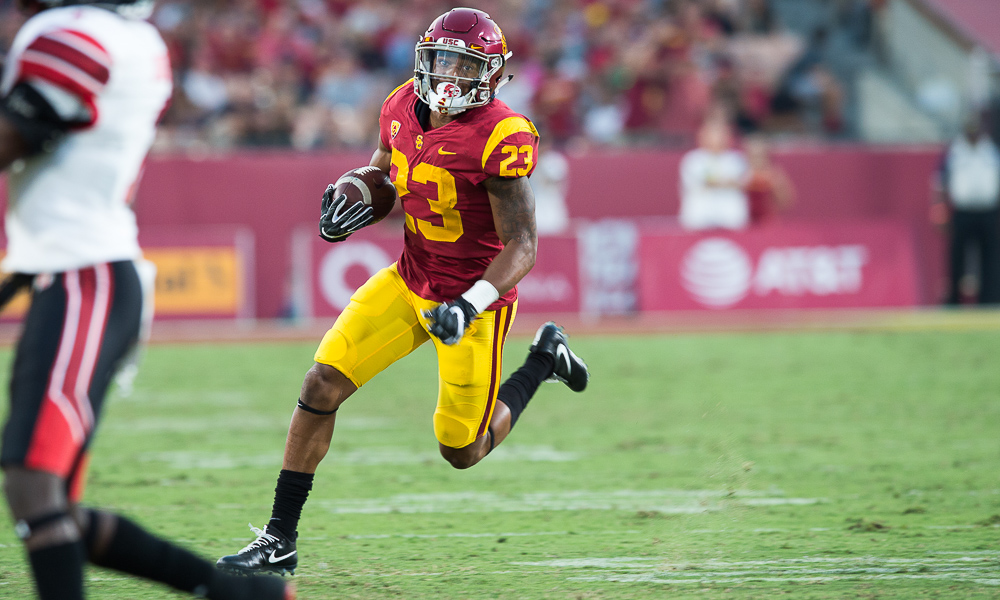 It wasn’t a surprise when the Trojans lost their leading passer (Sam Darnold) and runner (Ronald Jones) to early entry for the NFL draft, but the departure of leading receiver Deontay Burnett did catch a lot of people by surprise.

It’s not that Deontay hadn’t produced in his time with the Trojans (he led the team in 2017 with 86 catches for 1,114 yards and nine touchdowns) but he seemed destined to return for a senior season as a potential captain to lead one of the most talented trio of starting receivers in the nation, while having an outside shot at breaking the all-time USC pass catching mark.

None of that will happen of course now that Burnett is a member of the Tennessee Titans (signed as an undrafted free agent) where predictably the early reports are that he is performing well in OTA’s.

Not only did the Trojans lose Burnett in the slot but Steve Mitchell put together a solid senior year with 41 catches for 644 yards and four touchdowns of his own. That’s a lot of production gone and it’s being replaced by a grand total of 9 catches and 81 yards of experience between Velus Jones and Trevon Sidney.

Sidney opened the first day of spring ball with the 1’s but quickly suffered a meniscus injury and sat out the rest of spring, and only came back to PRP’s last week. Jones took the majority of snaps in spring and had some nice flashes of explosive plays in his bid to be the deep threat this offense will be looking for. Keyshawn Young will be in the mix when healthy and freshman Amon-Ra St. Brown has quickly shown in PRP’s that he is polished and ready to be an immediate contributor and challenger for the starting spot.

Of the veterans, Jones is well positioned to enter camp as the starter and it’s a role that the coaches think can take advantage of his speed as a deep threat and as a runner with the ball in his hands after lining up in multiple spots.

“It’s the opportunity I’ve been waiting for my whole time here,” Velus said. “I should be seeing the ball a lot this upcoming season, the coaches tell me they want to get me the ball in a lot of different ways, so one area I’m really working hard on right now is conditioning, just getting bigger, stronger, faster, because I need to come through for my team. I think my route running has gotten a whole lot better too in terms of keeping my pad level low, just using all the techniques I was taught, watching film and just learning from my mistakes.”

Jones, who is checking in these days at 198 pounds while standing 5-11 ½, says the added bulk and physical maturity has not taken away from his primary skill, his speed.

“I feel like I’m faster than ever. I didn’t lose a touch with my speed, if anything I got faster.”

One area where Velus will be looking to continue showcasing his speed is on kickoff return, a job he held down last year while fielding 31 kicks for 760 return yards (a respectable 24.52 yards per return).

“Doing kickoff return is such a big role, to open the game sometimes, and it helped to build my confidence up and to get my feet wet to this level. Now I can’t wait to get back out there full speed again, I haven’t scored a touchdown since my senior year of high school so we’ll have to change that.”

The Trojans will be looking for Jones to get into the end zone, both on special teams and with the offense, and it will be the ability to produce from the slot receiver role that will be critical to helping break in a new starting quarterback. The slot position is normally expected to put up big numbers (witness Burnett and Mitchell combining for 127 catches while lining up mostly in the slot) but you also have two receivers on the outside in Vaughns and Pittman who should be getting the lions share of the work.

“We’re all in this together with whoever the quarterback is because a lot of us are inexperienced, young guys to the game so it’s about trusting each other, learning from each other and communicating. It’s nothing new, it’s about coming out here every chance we get to help build that chemistry and once we get out there we know what we have to do, we have to make plays.

“It seems like I’ve been dealing with the process of having to wait my turn ever since I was playing in the park leagues. I had to transfer to another park at one point, then in middle school I had to sit out my 7th grade year, I balled out my 8th grade year, as a freshman in high school I didn’t play, I took a backseat role to a better receiver in 10th grade, and my junior year I had a breakout season. So I’m used to kind of coming up from the bottom, having to prove myself and showing patience. I’ve been good at doing that and I hope it will be like high school all over again once I start getting the ball in my hands.”

You had your knee scoped for a meniscus injury, what is your status now as you return to the PRP’s?

I feel pretty good. It’s been a minute since I’ve been out there so I’m going to take it slow and I should be back full-speed by camp.

You were running with the 1’s on the first day of spring at the spot vacated by Deontay Burnett, and then have been sidelined since. What is your approach right now?

I just have to push through it. It’s still my opportunity, the spot is still open so I have to fight to take it. Seeing what Deontay did, what Steven did, I think I’m kind of in the same area of what those guys were able to bring, I just need to show what I can do. I’m going to work like I’m the starter, and if it comes down to it that I’m not the starter, I’m still going to work like I am. I think I can be a deep ball threat, I’ve gotten a lot faster, gotten a little stronger, just want to help wherever I can.

Talk about the process of waiting your turn at USC.

At first it sucks when you come in and realize that everyone else is bigger, stronger, faster and you’re not going to play. But I wasn’t ready yet, and I know that now. I had some hip issues I needed to take care of and then I needed to build the strength back in my legs, and I’m ready now.