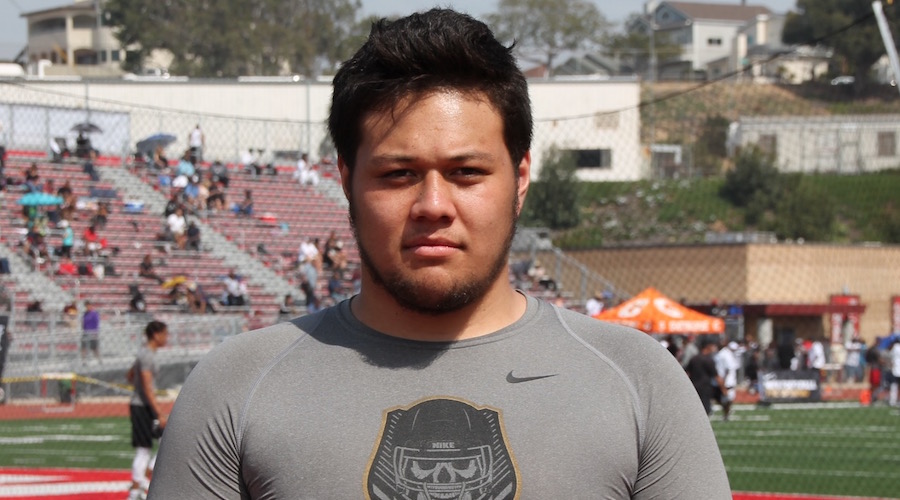 Following an outstanding junior season on the field, Vista Murrieta’s Chuck Filiaga has emerged as one of the Western region’s most sought-after offensive tackle recruits for the Class of 2017. With Arkansas serving as the latest program to throw their hat in the ring with the 6-foot-5, 334-pound prospect, he currently holds over 25 total offers now, and his recruitment is only heating up.

This past Sunday Filiaga made the trek up to Redondo Beach (Calif.) to take part in The Opening Los Angeles Regional, and while he didn’t wind up coming away with an invitation to the Opening Finals, he did provide a glimpse of what has so many college coaches clamoring for his services. That was particularly the case in the highly anticipated one-on-ones, where after a rough couple early reps, Filiaga finished off strong, holding his own against some top-flight defensive line talent.

“It was a positive experience coming out here,” Filiaga said. “It was good competition to go up against the top D-Ends. I haven’t had competition like that in awhile. It kept me on my feet.”

Originally from American Samoa, Filiaga didn’t move to California until just prior to his freshman year in high school, which he spent at San Diego (Calif.) St. Augustine. An aggressive blocker who uses his size and strength to dominate opponents on the high school level, Filiaga says that his brand of play is definitely something that was shaped by his experience with the sport in his homeland.

“Over there it’s more about brutal force,” Filiaga said. “There’s more aggressiveness. There are more big guys, and there’s less technique. Out here it’s all speed, technique and strength combined.”

“I learned a lot of new things from him, and I also learned some areas of my game that I need to fix up,” Filiaga said. “He talked to me about working on my footwork, getting low, and staying low, and keeping my hands and body squared.”

One day prior to The Opening Regional, Filiaga got a chance to become more familiar with Connelly’s replacement with the Trojans, Neil Callaway, as well as the rest of Clay Helton’s staff, as he attended USC’s Junior Day event. It was also his first unofficial visit to any college.

“Junior Day at USC was just fantastic,” said Filiaga, who also attended one Trojans game in the Coliseum this past fall. “I really liked it. It opened my eyes. I liked that it was an open campus, and it was a friendly atmosphere, and the coaches – they were all really nice.”

Having made a name for himself on both sides of the ball early in his career, Filiaga said that USC, as well as every other program, is targeting him as an offensive tackle. But Junior Day was less about discussing the specifics of his potential future role at USC, and more about becoming familiar with the new coaching staff on a personal level.

“They didn’t talk much about football with me,” Filiaga said. “They just talked more about getting to know me one-on-one, and me getting to know them since they’re a new staff. Coach Callaway left a great impression on me. He seems like a really good dude. He’s a coach on the field, but off the field he’s a friendly guy, and he’s open to anyone.”

While the Trojans obviously made a positive impression, Filiaga’s recruitment is still in its early stages, and he’s nowhere close to being able to narrow anything down at this point.

“Every school is on the same level,” Filiaga said. “I’m still just taking it all in, because it hasn’t started rolling until this year. I’m just going to wait for all of the offers and then I’ll narrow down my list.”

In an effort to aid his decision-making process, Filiaga hopes to take some more unofficial visits this summer. Arizona State, Oregon, Tennessee and Texas are among the programs he is considering checking out.