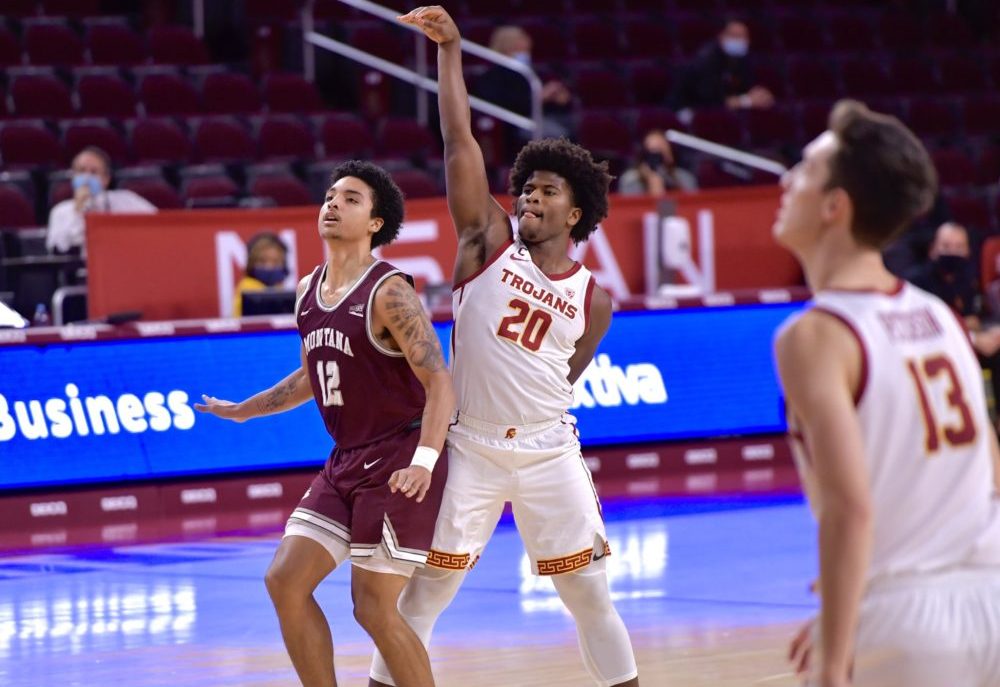 The first two games of the new season could not have been more different.  Although the Trojans started the same lineup, the results and contributions from different players were almost exact opposites. After an overtime win in the season-opener, USC cruised to a 76-62 win over Montana on Saturday night, a final score that doesn’t reflect USC’s domination in this game.

Against the Grizzlies, the Trojans played a spectacular first 15 minutes and led for stretches of the half by over 20 and by 19 at the break. In the initial stretch the Trojans showed how well they can play. USC made 71% of its shots and held Montana to 33% in the first 20 minutes. The first half of this game was much like the first half at Oregon State last season when USC did everything right at both ends. In this first half the Trojans made 4-6 threes and 10-14 free throws.

A Different Group Led The Trojans.

The Trojans showed they have a lot of quality depth. The two leading scorers in the first game did not score at the level they did earlier this week. Instead the points were spread around the entire roster.

It was clear from the outset that the Grizzlies’ game plan was to try to keep the ball away from Evan Mobley and see if others could beat them. Montana doubled and sometimes tripled Evan whenever he got the ball. He was very unselfish and didn’t take his first shot until the 11:13 mark. He finished with 11 points on 3-4 from the field and 5-9 from the line. The coaches are likely to push Evan to make quicker decisions and take more shots. After a very big first game, Tajh Eaddy finished with 1 made three pointer on only 3 shots. Tajh is not a player who will score big points each night but he will be a threat in every game.

Every player on the team has the ability to make a significant impact on a given night. Isaiah Mobley was only 1-7 from the field but he grabbed 13 rebounds and was the best interior defender. Ethan Anderson made two early threes and finished 2-3 from beyond the arc. Isaiah White had only one field goal but he made 8-10 from the foul line. Drew Peterson was the leading scorer with 13 points, and Max Agbonkpolo played 20 minutes, converted 3-7 from the field, grabbed 6 boards and was very active on defense. Boubicar Coulibaly saw his first action and made 3-4 shots in five minutes.

After A Free Flowing First Half, The Second Half Was Riddled With Fouls

The Trojans only took 46 shots in the entire game. On 23 made shots they had 17 assists and were consistently finding the open man for good shots. Both teams were at the foul line for most of the second half and at times it was hard to watch. USC took 39 foul shots and made 24. Montana shot 26 free throws and were limited to 35% from the field and 23% from three for the game. Coach Enfield thought the Trojans played very well in the first half and that they played hard throughout, but said the second half was very choppy. The Trojans converted only 32% of their shots in the second half and over a seven minute period all of their scoring was from the foul line.

With the big lead Enfield wanted to play different combinations. Drew Peterson played the point at times and the Trojans played a little zone in the second half. Enfield said that he is still trying to understand the team and the talent. They had far less time together than in a normal year before fall practice began. He made the point that it is almost a whole new team. Seven of the ten players are new. Isaiah Mobley has a much bigger role this year and is starting and playing a lot more minutes and Max also has a much bigger role. The only player who is in a similar role is Ethan.

This Team Has Great Chemistry

After the game Enfield said that he is “impressed with the team chemistry”.  Drew Peterson and Chevez Goodwin said much the same thing. Drew said the players are all very unselfish and added “We know we have the talent that can lead to a PAC 12 championship.”

Chevez talked about the tough summer months. He also said “We have meshed together very well. We have a really special and talented group.” Chevez is happy with his role on the team which he characterized as “playing hard and bringing a lot of energy.”

It was nice to get an opportunity to hear Drew and Chevez. They are both very personable.

The Trojans Leave For Connecticut On Sunday

Enfield said the team has a charter flight to Connecticut on Sunday for the Legends Classic. They play BYU on Tuesday and will play either UConn or Vanderbilt on Thursday when the first day losers and winners match up. The players are tested for Covid every day and will be tested again when they arrive. The event was originally scheduled for the Barclays Center in Brooklyn but moved to the Mohegan Sun in Connecticut over concerns about the virus. The Mohegan Sun is hosting a number of pre conference events over several weeks involving teams from all over the country.

In their first two games the Trojans have shown that they have good talent and depth at every position, often with players who have different strengths. The defense was much better against the Grizzlies than on opening night, but Montana will likely wind up average or below from behind the arc.The Trojans will see other teams with good three point shooters and teams with more inside length and talent. There have been flashes of very good play on both ends this week but the team needs to work to develop their identity. Last year the Trojans were consistently good on the defensive end in almost every game.

BYU will likely be the toughest non conference opponent the Trojans will play. If the Trojans can come home with two wins it will provide a great springboard for the rest of the season.