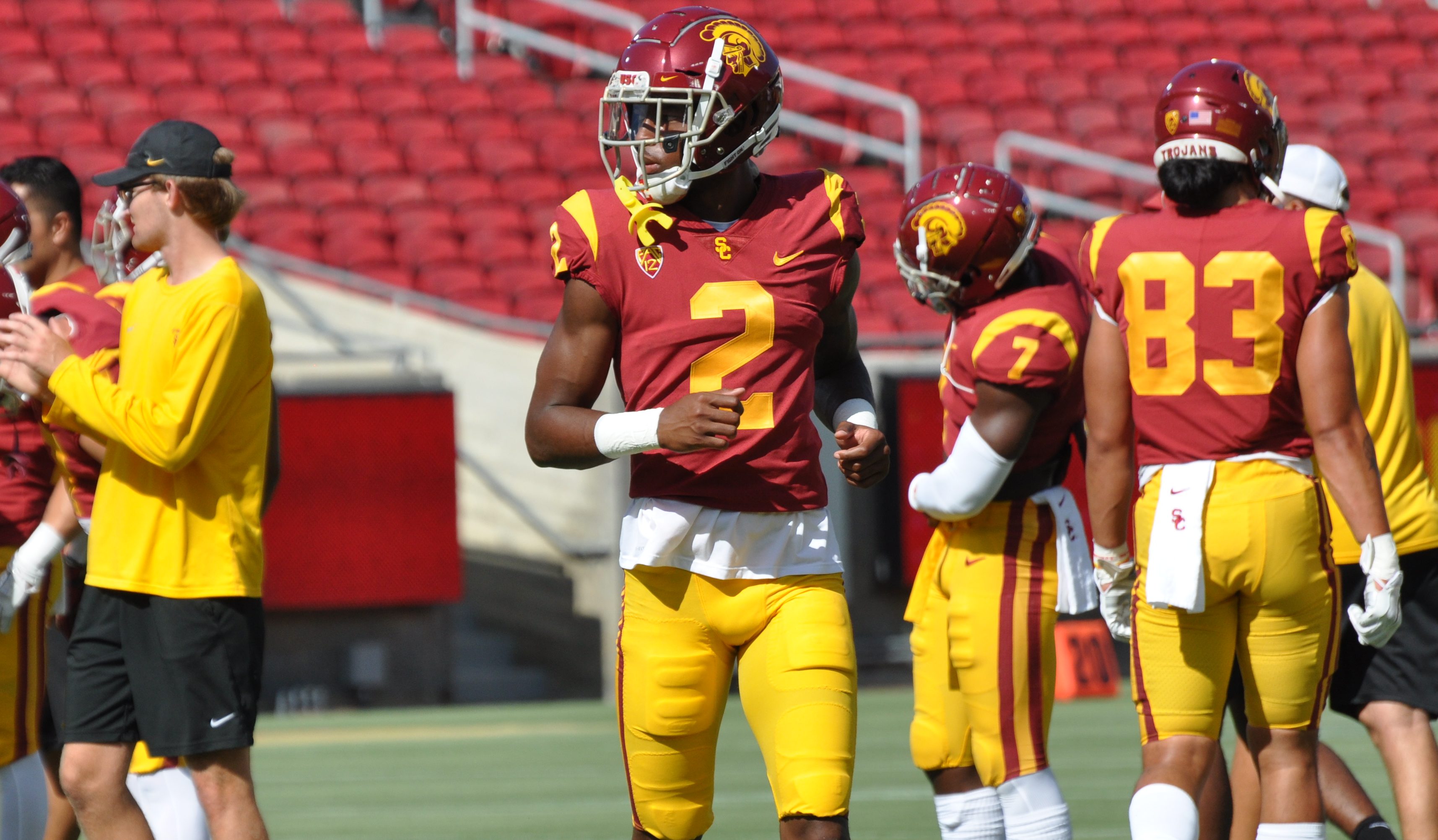 The 2019 USC Trojans got their first taste of playing in front of fans on Saturday afternoon, as the team took to the Los Angeles Memorial Coliseum for the Fall Showcase.

This was the second scrimmage of fall camp, and afforded USC fans the opportunity to see their team in action, as well as the newcomers on the Trojan football team to get a little experience playing in front of a college football audience.

It was a good day for the quarterbacks down the field, as it felt like deep balls were being completed all over the place. The crisp, short passing game was there in spurts, but it wasn’t quite on display like we’ve seen at times this fall. There were more drops today than we’ve seen in just about any practice, as normally sure-handed wide receivers had a handful of drops. Of course, many of them also hauled in terrific grabs, helping the quarterbacks to an overall productive day.

The run game was basically nonexistent. Clay Helton said after the scrimmage that he thought they’d look at the film and probably see that they left a few things on the table in the running game. It definitely felt like an afterthought on Saturday, with the exception of two strong runs by Markese Stepp along the goalline to get into the endzone.

There were a few holes opened and a couple runs that gained positive yardage, but there was never a commitment to the run game and nothing really to speak of in terms of it being an impressive performance on the ground.

Special teams, however, were terrific. Chase McGrath continues to boom the ball on field goals, as he connected from 39, 42, 44, and 51 yards out. Michael Brown also hit from 39 and 42, but was wide left from 51.

Ben Griffiths hit a 63-yard punt that chased Tyler Vaughns back and forced a fair catch at the 8-yard line.

Penalty flags few often again for the second scrimmage this fall. There were nine total penalties, with one on the defense negating what would have been the only turnover of the day on a fumble recovery.

We again saw plenty of shifting along the offensive line. The first unit came out with the regular group, with Austin Jackson, Alijah Vera-Tucker, Brett Neilon, Andrew Vorhees, and Jalen McKenzie from left to right. But from there, we saw Drew Richmond go at left tackle and right tackle with the first unit. Jalen McKenzie played some right guard. Justin Dedich took first-team snaps at center. Liam Jimmons took first-team reps at right guard.

Matt Fink got the scoring started, hitting Amon-Ra St. Brown deep down the middle for a 54-yard touchdown.

Caleb Tremblay was again involved in a number of plays, and had a tackle for loss on a pass from Jack Sears to Kenan Christon.

We repeatedly saw receivers able to adjust and come back to underthrown balls throughout the scrimmage. Velus Jones had the first one, on a deep ball from Sears. That led to a short strike from Sears to Devon Williams for a touchdown.

JT Daniels connected with Erik Krommenhoek on another ball that was underthrown, with Krommenhoek able to come back and grab it, escape his defender, and score a touchdown. Although, in a full contact situation, Daniels might have been sacked on the play.

The quarterbacks all got to run two-minute drills. Kedon Slovis’ started with a Raymond Scott sack, when Christon couldn’t quite get across to get him blocked. Hunter Echols also had a sack on the drive, and De’jon Benton probably got there as well, though the play was allowed to continue with a reception by Josh Falo. The drive ended with a Michael Brown field goal that hit off the upright from 46 yards out.

Fink’s two-minute drill was aided by a long pass to Michael Pittman, and then a great catch from Tyler Vaughns, going up over the cornerback and snatching the ball down at the one-yard line. Stepp easily carried it into the endzone from there.

Stephen Carr was able to show his cutting ability during the showcase, but unfortunately it kept happening deep in the backfield, as the defensive line got penetration on just about every one of his carries. His first play of the second half, he was met by Drake Jackson in the backfield, then cleaned up by a hard hit from Marlon Tuipulotu. Sears showed his scrambling ability on the drive, though eventually the defense forced a punt after a pass breakup by Olaijah Griffin, and a tackle for loss by Brandon Pili.

Daniels went with the second team and found Williams for a big gain, then hit a few passes to John Jackson III, before finding Williams again, who spun off a tackle attempt from a safety and jogged into the endzone.

Slovis picked on cornerback Chris Steele a bit, hitting Pittman deep over what looked to be good coverage from Steele, then going right back to Pittman for another big gain against Steele with a back-shoulder throw that really was unfair for the freshman. Kana’i Mauga made a great tackle to race into the backfield and chop Stepp down before he could get going, but Stepp hammered in the touchdown on the following play.

Sears made quick work of the first-team defense in his two-minute drill, as Vaughns came down with a terrific grab going up high along the sideline and getting his foot down. Vaughns then drew a pass interference call against Isaac Taylor-Stuart on a deep ball down the sideline. Vaughns was pushed out of bounds before the ball arrived, but he went ahead and caught it with one hand. Sears then hit St. Brown for another deep touchdown pass.

Malik McClain sacked Daniels during his final two-minute drills. This seemed to be one of the best practices for that outside linebacker position, with McClain, Hunter Echols, and Juliano Falaniko. They did a good job getting into the backfield and challenging the offensive tackles much of the day.