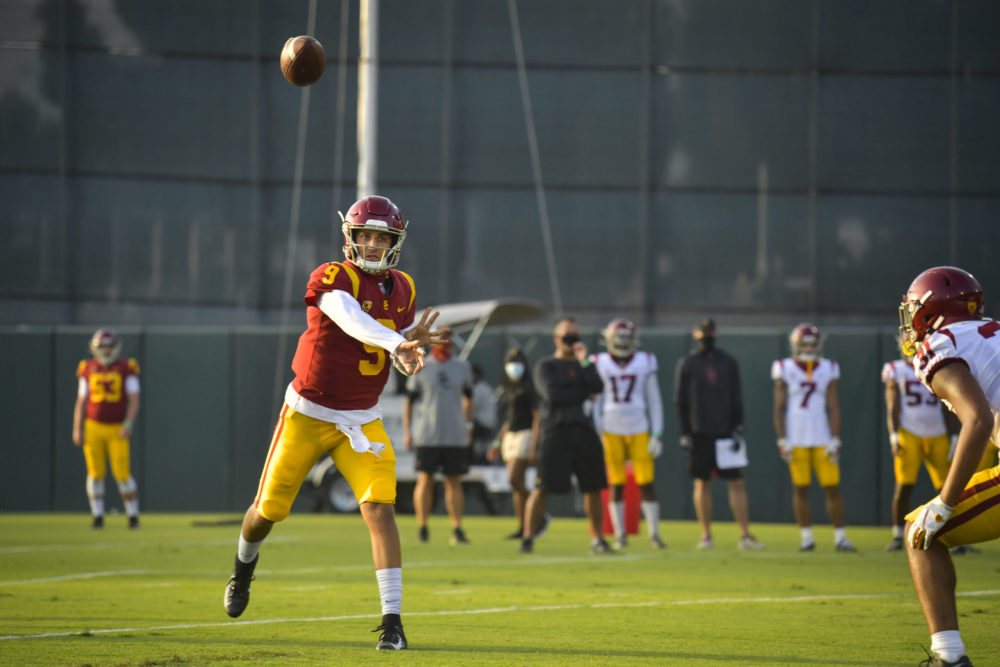 With USC fall camp finishing its second week of fall camp, leaving just two weeks before the Trojans kick off their season against Arizona State on Nov. 7, we’re taking stock of all three phases of the Trojans with what we’ve learned and anything that has changed regarding the USC position groups, beginning with the offensive side of the ball.

Players and coaches have raved about starting quarterback Kedon Slovis, and that’s exactly what you’d want and expect for and from a quarterback entering his second year behind center.

Cornerbacks Olaijah Griffin and Chris Steele said Slovis is making NFL throws right now and getting every received involved. This season presents a real opportunity for leaders on the team to step up and set the tone and Slovis is a quarterback–even as just a sophomore–capable of putting some of that weight.

At the very beginning of camp, offensive coordinator Graham Harrell said there were still some things to clean up with the offense, but it’s fair to believe that has already started to happen and will continue over the coming weeks.

Throughout this fall camp, this is one position where not learning anything new would be a positive, as the hope is that Slovis simply keeps progressing physically and mentally in order to lead the Trojans through this shortened season.

Behind him, Matt Fink and walk-on transfer Mo Hasan have both been mentioned. Those would be the Nos. 2 and 3 quarterbacks if the Trojans have to turn to anyone behind Slovis. Head coach Clay Helton said it’s great to have backups who have seen real game action.

The first thing we learned was that Markese Stepp is not all the way back from that ankle injury he suffered last season and wasn’t full go when camp started. Also in injury news, Vavae Malepeai is fully recovered from the knee injury that shortened his 2019 season, but a hamstring issue is preventing him from fully participating in fall camp. Clearly, the position isn’t at full strength right now.

But with the extra carries available due to those two being out or limited, Stephen Carr has stepped up and stepped into that No. 1 back role. Helton and running backs coach Mike Jinks both said Carr is having his best camp as a Trojan and what’s really standing out is that he’s embraced becoming a physical runner who hits the hole at top speed rather than dancing and waiting for a clear lane. Helton has praised a few players throughout camp so far, but nobody quite like Carr on the offensive side.

Kenan Christon is in the mix at tailback as well. Jinks said he’s put on about 10 pounds since last season and that will help him hold up a little better in pass rush situations.

The Trojans might need to rely on their running back depth again this year if the injury situation continues, and Jinks said he feels good having Quincy Jountti back. He said walk-on Ben Easington has had a good camp and was pleasantly surprised by walk-on true freshman Matt Colombo.

Clearly there is no issue in terms of finding carries for backs if only Carr and Christon are available. But the coaches feel Stepp will be ready to go for Arizona State and if Malepeai returns as well, the Trojans have four very capable backs on the depth chart.

Jinks said he envisions all of them playing this season, though he doesn’t believe in playing them all just for the sake of getting them on the field. He said he wants one back to step up as the top guy and he sees a structure where they are feeding the hottest back or backs during a game.

USC will also have multiple tailbacks on the field at the same time this season. Helton said there are plays and packages that call for two backs sharing the backfield. Jinks added that if that happens and they’re going up-tempo without substitutions, he wants the backs to understand the entire offense so they can line up as a wide receiver in that situation. Carr and Christon were pointed to as those dangerous pass catchers capable of doing that.

The biggest news at this position came over the offseason, as Kyle Ford is out for the season with an ACL injury. The Trojans are also without Munir McClain for the foreseeable future, as he is suspended indefinitely.

Without Michael Pittman this season, the Trojans have a top three of Amon-Ra St. Brown, Tyler Vaughns and Drake London, but Bru McCoy is healthy and having a very impressive camp.

The Trojans also have John Jackson III and a couple of true freshmen in Gary Bryant Jr. and Josh Jackson Jr. Both of the freshmen have shown plenty of potential, though Bryant is dealing with a mild ankle sprain right now. Even with that loaded top four, it wouldn’t be surprising to see Bryant contribute in some way this season–either as a receiver or potentially a returner. He’s been consistently mentioned as a guy who was making plays and as a difficult cover for USC defensive backs when healthy.

We’ve also learned that St. Brown has come into fall camp in the best shape of his life, which is impressive for someone who began lifting weights at five years old. He helped spearhead the Pac-12’s return to play this fall, so there might not be anybody in the conference more motivated to turn in a better season than St. Brown.

USC still has seniors Erik Krommenhoek and Josh Falo, but redshirt freshman Jude Wolfe might be the guy to watch this season. What we’ve learned is that Harrell absolutely plans to use the tight ends more in the passing game this season after they caught just 15 passes collectively in 2019.

There certainly wasn’t anything wrong with using London as a hybrid receiver-tight end last season, but Wolfe provides that downfield receiving threat in a big body that USC is looking for at this position.

This is one of those positions for USC that will be worth watching during the season, because it could go a variety of different ways.

Ethan Rae continues to recover from a knee injury he suffered in high school.

This is the position that had the most questions coming into fall camp. The biggest one was answered in the week leading up to the start, as Alijah Vera-Tucker announced that he would return for the 2020 season rather than opt out and prepare for the draft.

That gave the Trojans a left tackle to protect Slovis, and more importantly, another year before they had to come up with an answer there from a group of young players who might not have been ready to take on that responsibility this season.

At this point, the starting offensive line against Arizona State looks like it will be, from left to right, Vera-Tucker, Andrew Vorhees at left guard, Brett Neilon at center, Liam Jimmons at right guard and Jalen McKenzie at right tackle. USC won’t announce its depth chart until the Friday before the game, but that’s the line that has been used and referenced most this fall. It’s an interesting situation in that USC could have just one returning starter playing the position he played last season, but four guys returning who have extensive starting experience and a fifth who received playing time last season. Even with the shuffling parts and losing a first-round NFL draft pick in Austin Jackson, plenty is expected out of this line and both Helton and Harrell have talked about how they expect to be very good up front in the running and passing games.

Vorhees’ return from injury is a big boost to the team as he’s the strongest player on the roster and provides another big, experienced body up front. Jimmons has perhaps been the most pleasant surprise of fall camp. He saw some time at right guard last season, but from all reports, he’s really blossomed in Year 2 at the position. If he can help stabilize the right side of that line with McKenzie at right tackle, there’s no reason to think this can’t be one of the better offensive lines in the conference.

What remains to be seen is to what degree they are let loose in the running game and urged to use those 300-pound frames against opposing defensive linemen.

We’ve learned that Justin Dedich and Liam Douglass will likely be the first two off the bench, but that there really is no set structure yet for how substitutions might be handled. The coaches are still looking at guys at a variety of positions and trying to see what combinations work best if there needs to be a change in that first group.

Jason Rodriguez is leading the way for the young guys, and the group of six true freshman has been impressive. Jonah Monheim and Courtland Ford have been the top two guys, and it would not be surprising to see either get into a game in some way this season. Both have the ability to play either tackle or guard position, which will help them plenty in the future and as potential depth guys this season. Behind them, Casey Collier is working at left tackle and, while he might not right now be on the same level as Monheim and Ford in terms of readiness to see action as a true freshman, the coaches and fellow linemen are excited about his potential.

USC will be shorthanded a bit, as both Frank Martin and Bernard Schirmer have elected to opt out of this 2020 football season.