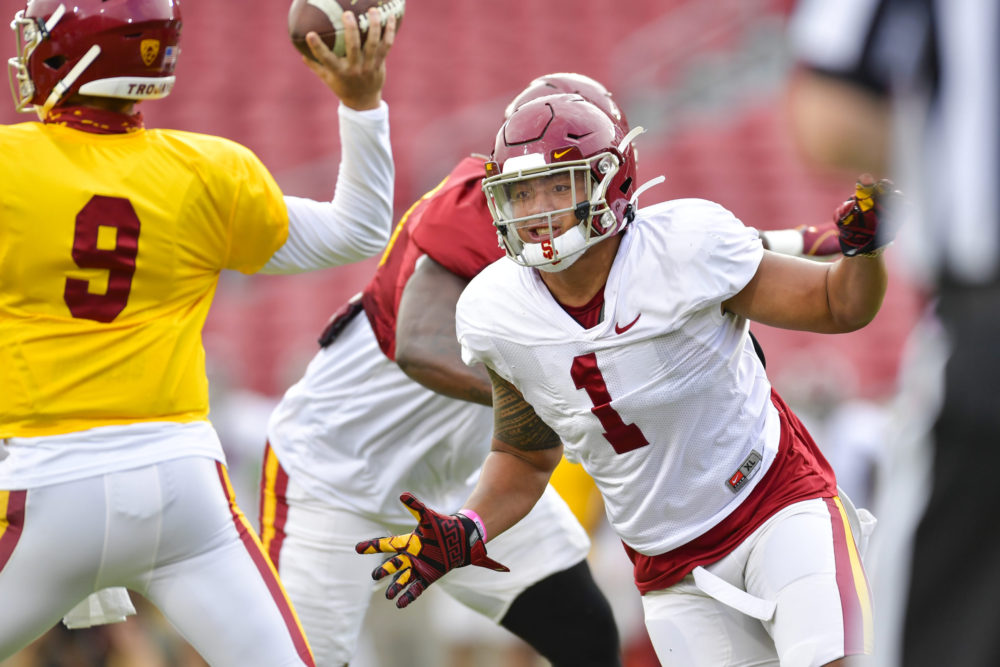 With USC finishing up its second full week of fall camp, the Trojans have just two weeks remaining before they kick off their season in the Coliseum against Arizona State. Here, we take stock of what we’ve learned on the defensive side of the ball and on special teams over the first two weeks of camp.

Two positions on this side of the ball were hit hard by personnel losses before fall camp even began, and this was one of them. Not having defensive tackle Jay Tufele this season is a major blow for the entire team and the defensive line in particular. Not only is Tufele one of the most talented players on the USC defense, but his decision to opt out and prepare for the 2021 NFL Draft leaves a hole without a lot of depth to fill it. USC will also be without Jacob Lichtenstein this season, as the big defensive end elected to opt out of the season.

The good news through half of fall camp is that Marlon Tuipulotu has stepped his game up and appears to be preparing for a strong season. Whether Brandon Pili can step up as a legitimate replacement for Tufele could go a long way toward determining how successful this front group is.

Defensive end Caleb Tremblay continues to receive praise from coaches and the hope is that he thrives in this defensive system. Nick Figueroa is going to be an important member of the line, and he too was mentioned by head coach Clay Helton as having a very strong fall camp.

The difficulty facing this group is that it appears young players could be called upon early and often. Stanley Ta’ufo’ou and De’jon Benton must be ready to play this season, while true freshmen Kobe Pepe, Jamar Sekona and Tuli Tuipulotu are likely to see time at some point.

USC is going to need to find a way to put pressure on opposing quarterbacks while using its front four and Helton said he was pleased with their ability to do that in the first scrimmage last week, though he didn’t specify if that was working against the first, second or third team offense.

In terms of a position being hit the hardest before fall camp began, if it wasn’t defensive line, it was linebacker. The Trojans lost senior Jordan Iosefa and talented Solomon Tuliaupupu for the year before fall camp opened. While it isn’t a loss at all when looking at last year’s roster–neither player was available for any part of the 2019 season–that is a potential team captain and someone capable of thriving in this defense gone for the year.

On a positive note through two weeks, Palaie Gaoteote appears to be a completely changed player while working in Todd Orlando’s defense. Helton raved about his ability to take tough coaching and change the way he plays the game. Specifically, Helton said Gaoteote’s ability to engage and get off blockers, and then make a play on the ballcarrier is vastly improved from last year.

If Gaoteote is playing at the level he’s capable of, that’s a huge bonus for the USC defense. Alongside him at inside linebacker, USC is looking at the duo of Kana’i Mauga and Ralen Goforth. Mauga has been dealing with a hamstring issue of late, so Goforth has been running with the first team at middle linebacker

Gaoteote, Mauga and Goforth will be expected to handle a bulk of the load in the interior, but Tuasivi Nomura is coming on as well. Contributions could also be expected from Eli’jah Winston and Tayler Katoa, though both have been slowed by injuries to this point.

At outside linebacker, Abdul-Malik McClain and Hunter Echols have had opportunities to earn a lot of reps while Drake Jackson has dealt with a hamstring injury. USC has three talented players here, but Jackson is likely to get a bulk of the time when he returns healthy. But that doesn’t mean he’ll be the only outside linebacker on the field this season, as Helton said there are times when two of those linebackers can be on the field together.

Chris Steele and Olaijah Griffin appear to be the top two options here, but Isaac Taylor-Stuart is recovered from the injury he suffered in the Holiday Bowl and Dorian Hewett continues to improve. USC also has Jayden Williams and Adonis Otey working outside with that group. Cornerbacks coach Donte Williams mentioned all of those guys as players who have shown flashes this fall.

Griffin is playing field corner while Steele is playing boundary corner and both have said this scheme that asks them to flip sides of the field depending on the ball placement is one that really takes advantage of their strengths as cornerbacks.

These corners are going against potentially the best group of wide receivers in the Pac-12, so it’s not surprising that they’ve allowed a few deep receptions and big plays to this point in camp. But Helton said this is also a group that is going to demand perfection every time it steps on the field. It’ll be interesting to see how well they perform against these receivers in the final scrimmage and heading into the first game of the season.

Talanoa Hufanga and Isaiah Pola-Mao return as starters and Helton has raved about Hufanga’s potential in this defensive system. The responsibility for the safeties changes constantly, so Hufanga could be up close to the line of scrimmage on one play and then 30 yards downfield defending a post on the next play.

Hufanga has been full-go this fall and has received positive reviews.

Orlando groups the nickelbacks in with the safeties, so this position group–under safeties coach Craig Naivar–is now home to Greg Johnson, Max Williams and Chase Williams.

Johnson was responsible for a big defensive play in the most recent scrimmage, as he stepped between Kedon Slovis and Tyler Vaughns to pick off a pass that he returned for a touchdown.

Ben Griffiths returns at punter and Chase McGrath as placekicker. Helton recently spoke glowingly about new special teams coordinator Sean Snyder, adding that the specialists are crushing the ball right now. Helton also said that Lewis has quickly established himself, joining a competition for both field goals and kickoffs.

USC has to get better special teams play in all aspects this season compared to last. The coverage units won’t truly be tested until kickoff against Arizona State, but the Trojans again have enough linebacker, wide receiver, running back and defensive back bodies to think those should be a strength.

Helton hasn’t specifically mentioned which players are working as returners at this point, though the Trojans bring back Stephen Carr, who has experience as a kickoff returner, as well as both Amon-Ra St. Brown and Tyler Vaughns, who handled punt returns last season.

USC could also look at true freshman wide receiver Gary Bryant Jr. as a returner when he returns from his ankle sprain. Running back Kenan Christon is an obvious candidate as a kick returner, and Olaijah Griffin is a dynamic athlete and capable of serving in either role.