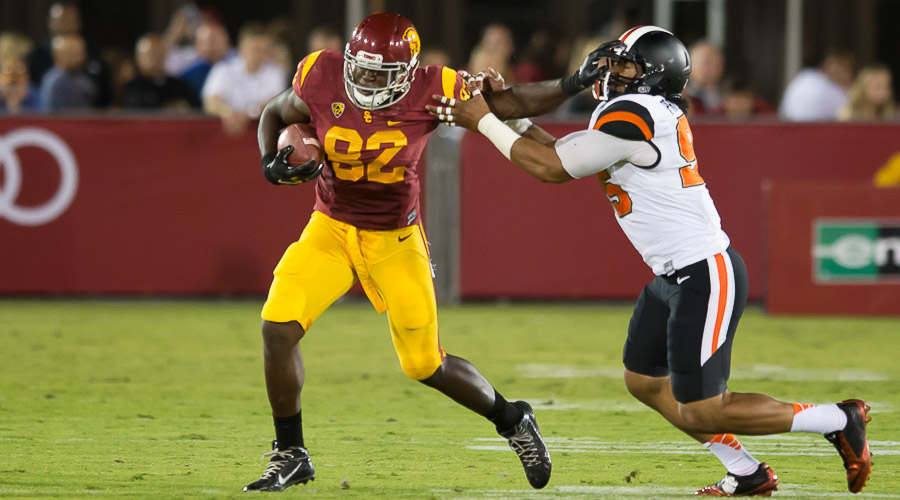 Randall, you are local, from Rancho Cucamonga. Can you talk about your decision to come to USC? Was it easy because you grew up close to USC?

I’ve been to USC fan ever since I was a little kid. I had family that went there, family that worked there. I grew up watching Reggie Bush and Matt Leinart, seeing that dominant football emerge on the scene. I got my USC offer a little late in the recruiting process but once I got it, it was kind of a no-brainer. First of all it’s a very prestigious university, but also the football program is top notch.

There were some coaching transitions during your time at USC. From Coach Kiffin to the very popular Coach Orgeron. And then you decided to stay your senior year with Coach Sarkisian. Could you talk about your decision to come back and see what could be done under Coach Sarkisian?

If I would have declared earlier I don’t know what my draft stock would look like, first of all. And I was coming off some injuries. On top of that, like I said I’ve been an ‘SC fan since I was a little kid, and to leave early wouldn’t be that great to the decision. So I wanted to stay as long as I could, get my degree, and start my graduate degree. I had a lot a faith in Coach Sarkisian and what he’s bringing to USC. I was aware that he uses tight ends a lot, and I wanted to experience that. That’s also why I stayed.

Can you talk about some of your other coaches at USC, including Coach Tuiasosopo, as well as Offensive Coordinator Clay Helton?

Coach Tuiasosopo, he’s an interesting guy. Me and him have become close over the past year. He’s naturally a quarterback and that’s kind of how he coaches. It’s something that I’ve been able to take away as far as learning offensive schemes and quarterback reads and how tight ends fit to the offense. Yeah, he hasn’t played the position before but on the same token he has taught me a lot about offense as a whole and we’ve got a pretty solid relationship. Clay Helton, has been kind of like a father figure to me at USC. He’s been there since the beginning and he’s always believed in me from the get-go, and he’s believed in me throughout my whole career. He’s given me plenty of opportunities to shine and I thank him for that. I think he’s going to have a lot more successes this upcoming season at USC.

Let’s talk about the different styles of coaching between the head coaches while you were at USC, and what it is you learned from each, Coaches Kiffin, Orgeron, and Sarkisian.

A lot of people would look at coaching changes as a complete detriment to your collage success. but I kind of look at it as a benefit, because I learned a lot of different coaching styles. Coach Kiffin, a lot of people might not agree with this coaching style. He’s definitely a great guy, a great coach, a great offensive coordinator and he’s built more like a businessman or a stockbroker, so he ran the team like a business and for the most part it was somewhat successful. When Coach O came, he was more of like that favorite uncle that you didn’t want to disappoint. He got the best out of a lot of guys on the team. A lot of guys were playing hard and doing all they could just so they could make him proud. That’s something that I really appreciated from Coach O. Coach Sarkisian, it’s interesting, you kind of got like a mix of both. He’s got some Kiffin techniques as far as being business oriented, but on the same token he’s very personable. He knows how to relate to guys 18,19, 20 years old. Like I said before it was not a complete detriment that we underwent coaching changes.

How was it like playing tight end and getting to play with the likes of Rhett Ellison, Jordan Cameron, Xavier Grimble? Let’s talk what is was like to play with arguably one of the best tight ends in the country.

It was a lot of fun, coming up as a freshman with guys like Rhett Ellison and Blake Ayles and Jordan Cameron. I learned so much and I was very fortunate to come in the time that I did. Even when I talk coaches and scouts when I’m in the draft process, I always mention those guys Rhett Ellison and Jordan Cameron and all of the stuff that they taught me. All the coaches, all the scouts, know those guys and they understand that when you go to USC and you play tight end and you work out with those guys you are a pretty solid prospect. I definitely appreciate everything they have done for me. It was a lot of fun, and Xavier Grimble, I wish him all the luck. He’s doing alright now in the league. He was kind of my right hand man at SC.

You were a big leader at tight end, and are now moving on.  How do you see the future of tight end at USC with your departure?

Well, I think I’ve done a good job in trying to pass on that tough rugged mentality that Rhett Ellison passed down to me and Xavier. I think Jalen Cope-Fitzpatrick ran into some off field issues, but he should be coming back and leading that group pretty well. Bryce Dixon showed a lot of potential last season and I’m looking for a lot of big things out of him this season as well.

What is your favorite on the field moment as a Trojan? If you could pick one play, one moment, out of all the games that you have played in.

One play? Oh, that’s tough… In 2011 when we went to Oregon and we beat them by that last field goal. I remember I was on the field goal block team with Matt Kalil (that was another guy I looked up to), and I will never forget that win, and seeing the excitement of all of the seniors and all the older guys’ faces, that was something that I’ll definitely cherish. That’s probably my favorite.

Alright now you didn’t participate in Pro Day because your injuries, can you talk about how the rehab process is going?

The rehab process is going well. Everything is going accordingly. I’m training and doing as much lower body and upper body stuff as I can.

You mentioned getting your masters at USC. Can you talk about what degree you graduated with and your current studies?

I graduated last year with a degree in political science, and then I started my masters last fall, in marketing management. I got 3 more semesters, and I’m looking to come back in my off seasons to chip away at that.

You recently put out a tweet about how hard it is to refer to yourself as a “former” Trojan football player. Can you talk about what makes it so hard?

Once you are done with your career playing football what do you think you want to do, what kind of career might you be interested in?

It’s tough to say now but I’ve been doing my research and talking to may dad about maybe pursuing a career in marketing, entertainment, sports, or product marketing, or maybe IT. It’s a little up in the air right now.

Anything else that you want to say to the Trojan fans out there as you move from this step to the next step in your life?

As cliche as it might sound, it’s been a pleasure playing for USC. I just want to thank all the fans and all the supporters for showing their love and support throughout my time at USC and for the team. Although I no longer wear the Trojan helmet, I’m still a Trojan for life!

Got any questions, including on any legal issues involving Trojan Sports, or topics you want covered on the Trojan Law Blitz With Lizelle Brandt?  Email Lizelle at [email protected], or tweet her at @LizelleBrandt.