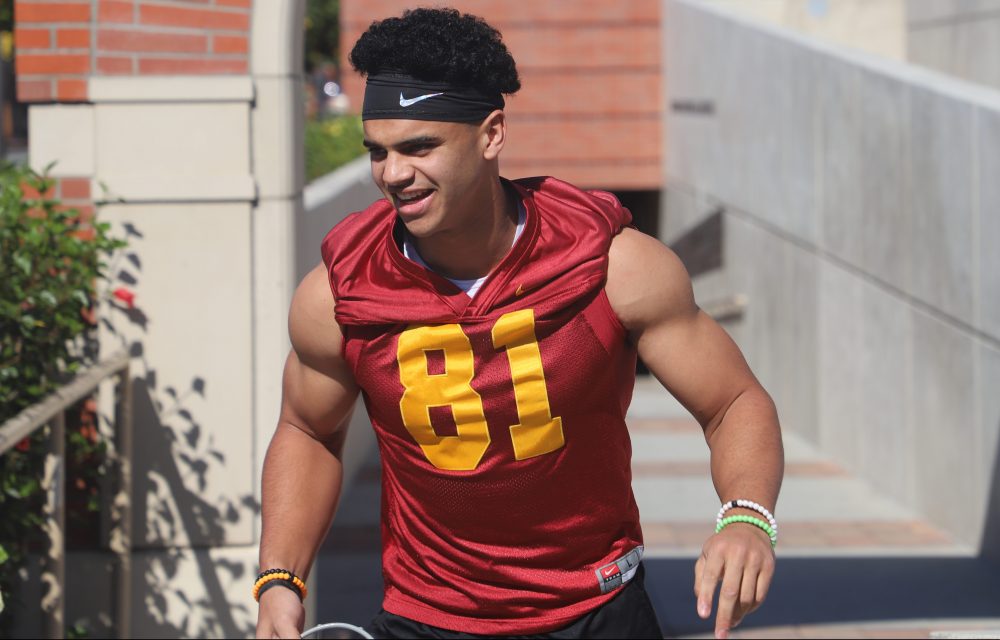 The USC Trojans were finally back on Howard Jones/Brian Kennedy Field Wednesday afternoon. It’s been two and a half months since the last game of the 2019 season, plus an extra day as Tuesday’s practice was shifted to Wednesday, but the Trojans crossed the starting line on the 2020 season, complete with a new defensive coaching staff, plenty of talent on both sides of the ball, and already a substantial injury list.

The most visible change from last year to this year is that there is an entirely new defensive coaching staff for the Trojans. From the day he was hired, we heard all about the energy that defensive coordinator Todd Orlando brings to the practice field and the program overall. It was the first thing anybody said about him, and somehow they still undersold the energy he bring. He is an absolute maniac, and that is meant completely as a compliment. He seemingly did not stop moving or talking throughout the entire practice. After one play, he ran wide receiver Bru McCoy down to celebrate a long catch and run with him. After another, he chased linebacker Palaie Gaoteote 30 yards into the endzone after he scooped up a fumble. Orlando isn’t shy about inserting himself into drills or letting guys know how they performed on each rep, positively or negatively.

And with all that, he’s only slightly ahead of safeties coach Craig Naivar in terms of how vocal and visible he is during a practice. After one day, there have been rave reviews from the defensive players in terms of the new assistants.

“I love them,” defensive end/outside linebacker Drake Jackson said of the new coaches. “I like the intensity. I like the humor they [have]. You can tell that they’re coming in and they want to have a change with us.”

“I want to win,” he said. “They’re trying to win, just like us. And you can tell that they’re all about us and nothing else.”

Safety Isaiah Pola-Mao was able to spent plenty of time with Orlando and Naivar on the field today, as well as off the field since they were hired.

“I think the biggest thing with them is intensity, energy,” Pola-Mao said. “That’s all they bring is non-stop energy, so when we’re on the field, there’s always juice. They’re always trying to hype us up.”

Pola-Mao and fellow safety Talanoa Hufanga said they could pick up on the coaches’ energy from the moment they first met. Pola-Mao said it came with a big smack the first time they met. Hufanga said he could hear it through the phone the first time he spoke with Orlando.

“You know that Southern accent, so it’s just non-stop yelling, no matter what it is,” Pola-Mao said. “It could be positive information, but they’re still yelling.”

While the overall structure of practice felt very familiar to last season, there were a few new wrinkles that stood out about Orlando. When the defense takes the field, they line up shoulder to shoulder in a crouched position, like a sprinter getting set. Then they burst off the line together onto the field.

Orlando and Naivar appear to be pretty fanatical about doing everything the right way, and that includes wearing equipment. Orlando could be overheard getting on a player about not having their mouthpiece in before a play, and another Orlando and Naivar delayed the defensive sprint off the line while a player buckled his chinstrap.

Orlando sets up deep behind the safeties, while Naivar typically patrols at the sideline along the line of scrimmage. And virtually ever play winds to a conclusion as one or both are yelling, “finish” or “run,” as they push the idea of rallying to the ball constantly.

Cornerbacks coach Donte Williams was true to his word, coaching the potential starters just as hard as the walk-ons. He doesn’t come across as being as vocal as Orlando and Naivar, but he definitely brought some enthusiasm during the one-on-ones, and there was a lot of technique work with the cornerbacks today.

Defensive line coach Vic So’oto spoke during his introductory press conference about his group hating him before they loved him. He’s definitely going to work them hard, and a few times the entire unit had to do up-downs for a mistake made by one player. Without pads on, it’s tough to gauge the “violence” So’oto spoke about bringing, but he certainly seems like another coach capable of taking the intensity up a couple notches once the pads come on.

There was plenty of intrigue about how the offensive line would be dealt on the opening day of spring ball, and it delivered, with new faces just about everywhere.

Alijah Vera-Tucker took first-team reps at left tackle, while Justin Dedich started at left guard. Brett Neilon was at center, with Liam Jimmons at right guard and Jason Rodriguez at right tackle. Jalen McKenzie was not at practice, as he has class on Wednesday. It will be interesting to see where he lines up when he returns, as he could go back to right guard, where he played all last season, or move out to right tackle.

Kedon Slovis and Stephen Carr were in the backfield, with Erik Krommenhoek at tight end, and Tyler Vaughns, Bru McCoy and Kyle Ford at receiver.

Defensively, Drake Jackson worked exclusively at “B” backer–a hybrid defensive end/outside linebacker position that allows him to stand up at the end of the line of scrimmage. Jackson said he loves the position as it allows him to drop into coverage at times as well as rush the passer. Inside him along the line were Marlon Tuipulotu, Brandon Pili and Caleb Tremblay. Like McKenzie, defensive tackle Jay Tufele missed practice today due to class.

Head coach Clay Helton said afterward that moving the practice from Tuesday to Wednesday cost Tufele and McKenzie the practice, due to academics, but they’ll be back out for the regularly-scheduled Tuesday/Thursday/Saturday practices.

Behind the defensive line, Palaie Gaoteote and Kana’i Mauga were the linebackers, with Pola-Mao and Chase Williams at safety, Greg Johnson at the nickel, and Chris Steele and Olaijah Griffin at cornerback.

The second-team offensive line had Frank Martin at left tackle, Liam Jimmons at left guard, Dedich at center, and walk-ons Damian Lopez and AJ Mageo at right guard and right tackle. Clearly it’s a thin offensive line right now, and the six additions in the 2020 recruiting class will be welcome depth when they arrive this summer.

Matt Fink took second-team reps at quarterback, and the Trojans had to call on walk-on wide receiver Brad Aoki (all 5-foot-9 of him) to take third-team quarterback reps.

Defensively, Juliano Falaniko came in at the hybrid linebacker position, with De’jon Benton, Stanley Ta’ufo’ou and Connor Murphy across the line, Eli’jah Winston and Ralen Goforth and linebacker, Briton Allen and Kaulana Makaula at safety, Max Williams at nickel, and Dorian Hewett and Jayden Williams at corner.

If you want a player of the day from the first practice, you probably couldn’t go wrong just picking a young wide receiver at random. Kyle Ford was outstanding, while Bru McCoy was a focal point of the offense at times. True freshmen wide receivers Gary Bryant and Joshua Jackson looked like it was their third fall camp, not their very first practice in a USC jersey. And John Jackson III had easily the play of the day, as he went up high with one hand to snag a back-shoulder throw down the sideline.

At one point during 7-on-7 work, Slovis hit eight-straight completions, going three times in a row to Ford, once to McCoy against strong coverage from Griffin, back-to-back tight end completions to Erik Kromenhoek and Daniel Imatorbhebhe, and then deep down the sideline to Josh Jackson.

Tyler Vaughns had a few nice grabs today, but it should be scary for opponents that the wide receiver position looked so good today with Amon-Ra St. Brown on the sideline. This group is truly loaded.

But with so many passes flying, the defensive backs–specifically Chris Steele and Max Williams–had great days of their own. Steele against McCoy is going to be a terrific practice-field matchup to watch this spring and for the next several years. During one-on-ones, McCoy got the best of Steele early on, but when the ball was moved close to the goal line, Steele posted four straight wins against McCoy (one ball was caught, but kept out of the endzone). Max Williams had goal line reps where he knocked a ball away from Bryant, and physically matched up with Ford to keep him out of his route.

What a great sight to see tight end Daniel Imatorbhebhe back on the field and fully healthy. There was no easing him back onto the field or into the offense today. He caught more than a few passes and hit the ground pretty hard after one reception before bouncing back up.

You certainly can’t establish a pattern with just one practice, but the three healthy tight ends–Imatorbhebhe, Jude Wolfe and Krommenhoek–were all over the place today. Wolfe caught a long touchdown from Slovis on a ball down the seam.

It’s a fairly extensive injury report for the first day of spring ball, as Helton again mentioned the Trojans have had 30 players undergo surgeries since August 1.

Safety Talanoa Hufanga will miss all of spring ball as he underwent surgery on his shoulder following the season. Wide receiver Amon-Ra St. Brown will likely miss spring ball as he had a sports hernia surgery. Running back Markese Stepp will also be held out this spring as he recovers from his ankle injury.

JT Daniels had a second minor surgery to clear up some scar tissue and continues to be on pace to return this fall. Helton said they will look at him after spring break and hopefully they can maybe get him throwing to wide receivers at some point late this spring.

Isaac Taylor-Stuart will not participate this spring. He did not have an ACL injury, but there were other ligaments that needed to be repaired. He should be ready by fall, according to Helton.

Vavae Malepeai is not cleared to practice yet. He did some running on the side, but is still dealing with his knee injury.

Linebacker Solomon Tuliaupupu was able to do more today than he did just about all season in 2019. He wasn’t a full participant in practice, but he was able to do some individual drills and warmed up pretty vigorously considering we didn’t see him do much of anything last fall.

Drake Jackson got inside Vera-Tucker for a sack. Vera-Tucker said there is a little rust to knock off with the move from guard to tackle.

Brandon Pili had a sack. He has a chance to be a really big part of this defense this year.

McCoy got on the end of a Fink throw and was able to showcase a little bit of his run-after-catch ability.

Vaughns worked a bit at punt returner, while Gary Bryant returned a kickoff.