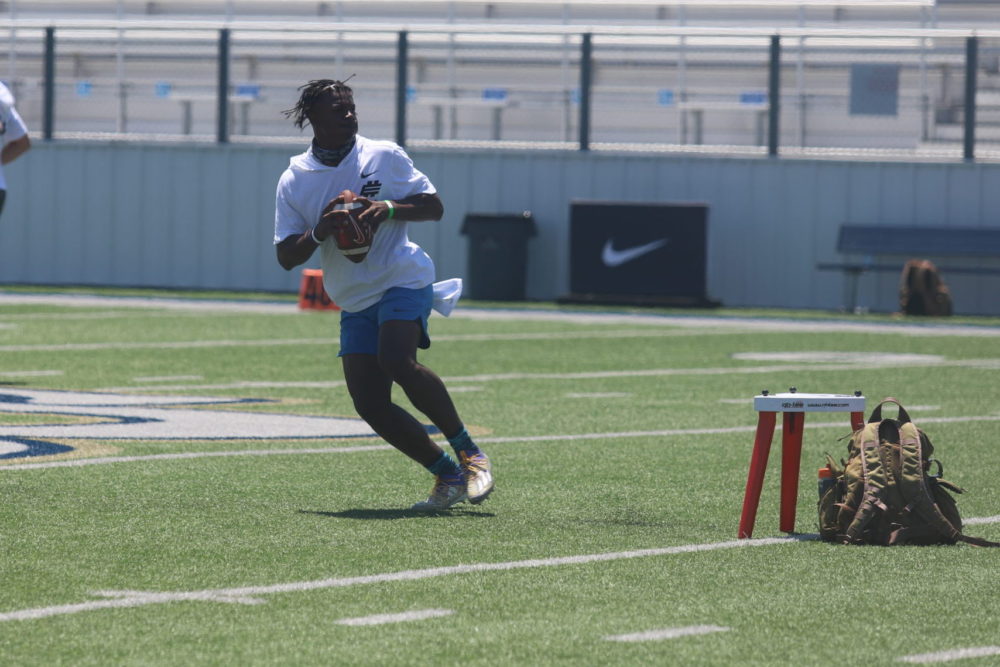 The Elite 11 Los Angeles Regional took place this past weekend, with a few dozen quarterbacks competing on the St. John Bosco campus. USC 2022 quarterback commit Devin Brown was not in attendance and he’s already earned an invite to the Elite 11 Finals with a performance at an earlier event. The headliners were four-star 2022 Texas commit Maalik Murphy (Gardena, Calif./Serra) and 2023 five-star prospect Malachi Nelson (Los Alamitos, Calif./Los Alamitos), but there were more than a few addition quarterbacks who stood out.

We run down a few of the standouts we saw at the event.

QB Maalik Murphy – I like everything about Murphy, from the size to the demeanor to the arm strength. It still surprises me that USC never really made a run at him and there will obviously be comparisons between him and Brown going forward (as there are with so many quarterbacks in the same class). He wasn’t flawless on Sunday, but he did enough to warrant an invitation to the Elite 11 Finals, which was very much deserved.

QB Nate Johnson – Johnson, a 6-foot-2, 185-pound three-star prospect from Clovis (Calif.) has a chance to be a big-time quarterback. He threw the ball as well as anybody on Sunday and was the SPARQ winner at the event as well, which helps prove the athleticism he possesses. He’s taken an official visit to Utah this month and hopefully a trip to Michigan this weekend can sway him, because I’d prefer he not wind up anywhere in the Pac-12 and facing USC down the line.

QB Katin Houser – Houser joined Murphy as the Finals recipients on Sunday and it was very much deserved for Houser as well. The 6-foot-3, 200-pound quarterback threw it very well and was very accurate. It’s easy to see why he landed at Boise State, and why Boise State hasn’t lost more than five games in a season since 1997. Houser has a chance to be a big-time quarterback as he continues to develop. All the tools are there, including a great release and a feel for making all the throws.

QB Travis Throckmorton – He has a similar look and build to Houser — Throckmorton is listed at 6-foot-3, 205 pounds — and both were wearing backwards hats during the event, so there were some double-takes when their group was across the field. He’s an Oregon State commit, but it wouldn’t be surprising to see other schools come after him this fall once he starts putting together his senior season. He throws a very catchable ball and has tremendous accuracy. He tied for the lead in the Golden Gun accuracy competition on Sunday.

QB Jayden Denegal – The Apple Valley product is a first-off-the-bus kind of quarterback, at 6-foot-4, 215 pounds and a frame that is very sturdy in the pocket. He doesn’t possess the quickest delivery, but that ball gets moving and the arm strength is impressive.

QB Noah Fifita – Arizona is getting a good one in Fifita. The height (listed at 5-foot-10) is always going to be a knock, but he can throw it with anybody and is effortless in a way where it always looks like he’s having a blast doing anything on the football field. If he can overcome the issues that come with being a sub-six-foot quarterback, Wildcat fans will really enjoy watching Fifita play.

2023 QB Malachi Nelson – The 2023 five-star prospect can play with any of the 2022 quarterbacks and always looks comfortable throwing the football. The delivery isn’t picture-perfect, but he can do anything and everything a quarterback is asked to do with a football. There were too many incompletions early on to call this an excellent day for Nelson, but he did enough throughout the event to prove again that he’s a five-star talent and a guy who can carry an elite program. He won the underclassman Accuracy Award and brings a comfort level and swagger to the quarterback position that makes coaches comfortable giving him the ball and letting him work.

WR Tetairoa McMillan – McMillan was the biggest name to come out and catch passes for the quarterbacks and he’s always fun to watch. His overall athleticism in a frame that big allows him to make a play on literally every ball thrown his way, and his volleyball and basketball backgrounds are evident whenever he has to go up high for a pass. His football ceiling might be unknown while he’s playing multiple sports (we’ve heard from Drake London about how much focusing on just football this offseason has helped his gridiron game), but he’s already a phenomenal talent.

QB Maalik Murphy – He has the prototypical size and frame that you want from a QB. He is the smoothest passer in the class and seems to be very coachable. Good footwork and throws a very tight and “pretty” spiral. He is a true 5-star, in my opinion. He can spin it when he needs to and knows when to put touch on the ball, thus he knows how to pass and make it a catchable pass. Just a phenomenal talent and a good kid.

QB Jayden Denegal – Good size kid with very good mechanics. He throws a great ball and has solid arm strength. He was the biggest surprise for me in the group and a kid I would LOVE to see USC offer and get. He is a sleeper. Great frame and seems to be very athletic. Total under the radar kid that could end up being a great player for a program. He is also very humble and sincere, the kind of player you want in a program.

QB Travis Throckmorton – Although he is listed at 6’3″, it felt like he was one of the bigger kids we saw there. He has a canon for an arm and just zips the ball out. Smooth throwing motion and good mechanics. His upside could be very high if he can be develop. Just has that feel to him that you think he could blow up and become a great CFB quarterback.

2023 QB Malachi Nelson – I don’t think Malachi had the greatest day there. He clearly can be very, very good, but felt like he didn’t give his all on every event. Throws a good ball and has good size. I don’t love his mechanics as both Erik and myself saw a bit of a hitch or hiccup in his throwing motion. When he pays attention and is trying, he is a 5-star. The question is, will he always be on and attentive?

2023 QB Kekahi Graham – He is undersized and a lefty, but boy did I like this kid. He is a ’23 recruit from Hawaii. I love his accuracy, arm strength and focus. He needs to be more aggressive and push more as I felt like he was jumped in line several times. To be a great QB, you need that alpha attitude and he needs to develop that. If he was 6’2″ or taller, he would be a top 100/150 player in his class.

WR Tetaitoa McMillan – He is a big kid with a nearly unthinkable catch-radius. Soft spoken and with a great attitude, you just like players like him. He makes every catch on the balls thrown to him. He is one of the smoothest route runners you will see. Everything, even terrible passes, he makes look easy and effortless. If he can get a bit of an edge to him, he is an easy 5-star level kid. Love his game, just needs to get a little more aggressive and physical. Great talent.