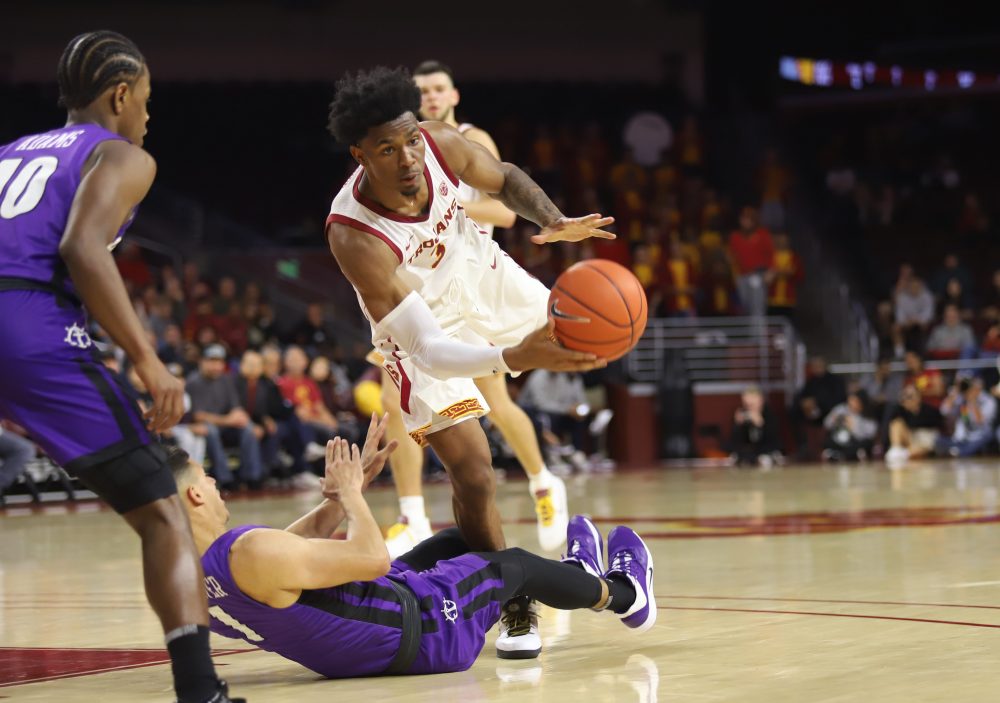 The USC basketball roster continues to undergo massive changes this offseason as yet another name looks as though it will be removed.

Sophomore shooting guard Elijah Weaver announced Tuesday that he has entered his name into the transfer portal and will look to explore other options in furthering his basketball career.

Weaver is the second member of USC’s backcourt to enter the transfer portal this offseason, as point guard Kyle Sturdivant made that move in late March. Sturdivant subsequently transferred to Georgia Tech to be closer to home.

This is a big blow for USC, as the Trojans were already shorthanded in the backcourt. Returning point guard Ethan Anderson will be the starter there, but Weaver was expected to take over as the other starting guard. Last season, Weaver started 14 games and averaged 6.6 points, 2.4 rebounds and 1.8 assists per game.

If Weaver follows through with a transfer, USC will return just five players from last year’s roster, and just three–all true freshmen last year–who played in more than three games.

The Trojans are set to receive a major influx of bodies via transfer this offseason, as four players have announced their intentions to transfer to USC.

Shooting guard Tahj Eaddy was the first to announce his commitment to USC after electing to transfer from Santa Clara. The 6-foot-2, 195-pound shooting guard will likely have even more responsibility this season for the Trojans in Weaver’s absence. He averaged 9.1 points per game this season, but finished the season scoring in double-digits in four-straight games.

USC then added a couple bigger bodies, as wing Isaiah White announced his would be headed to Los Angeles from Utah Valley, where the 6-foot-7, 205-pounder averaged 8.5 points per game his first season at Utah Valley, then led the Wolverines with 14.5 points and 8.4 rebounds this past season.

USC will also have big man Chevez Goodwin arriving via a transfer from Wofford. The 6-foot-9, 225-pound Goodwin led the Terriers with 6.2 rebounds and 1.1 blocks per game this past season, while finishing tied for second on the team with 11.9 points.

The Trojans will also have two big additions in the form of five-star center Evan Mobley, the No. 1 player in the country in the 2020 recruiting class, and guard Noah Baumann, a career 45% three-point shooter who is now eligible after transferring from San Jose State. Without Weaver, Baumann could be counted on to pick up more in the scoring department.

As of now, the only players returning this fall for the Trojans are Anderson and Baumann in the backcourt, and the young trio of Isaiah Mobley, Max Agbonkpolo and two-sport standout Drake London in the frontcourt.