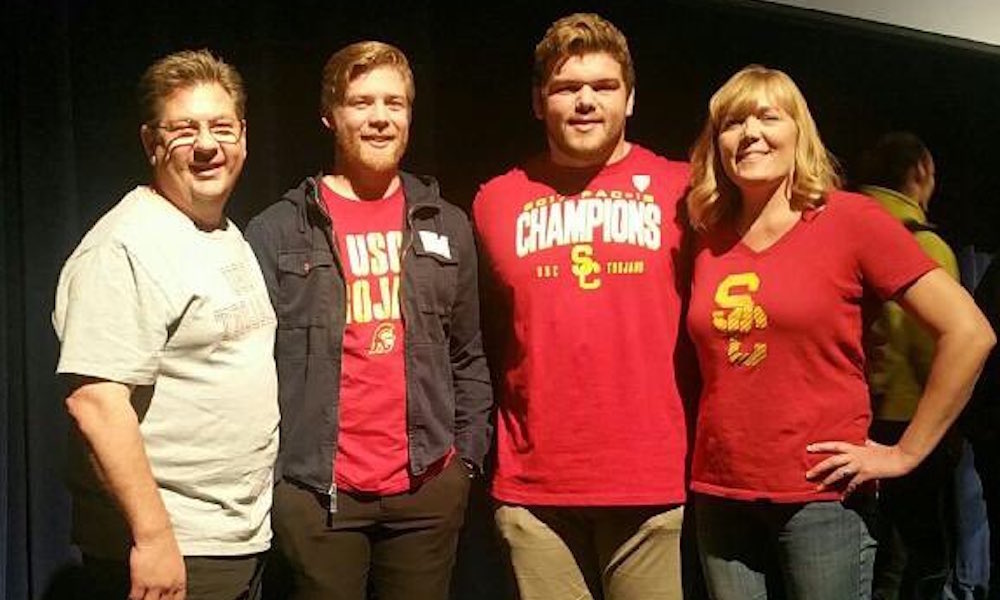 The first day of the new early signing period is in the books and it resulted in eight players signing with the Trojans, four who will enroll early and four who will wait until the fall to arrive on campus.

The group is headlined by linebacker Palaie Gaoteote, ranked as the #1 ILB in the nation and a two-time national champion at Bishop Gorman HS. Palaie had 80 tackles this year, 20 for loss, as he transitioned to the inside linebacker role after playing earlier in his career on the outside. He plays with an aggressive style that has drawn comparisons to Junior Seau, and the possibility of wearing #55 at USC. Clay Helton addressed the issue by saying the number 55 is one that is earned, and if becomes something to consider he will discuss it with the other 55’s.

Gaoteote certainly wasn’t the only linebacker signed today as Raymond Scott, a two-time state champion and four-year starter from Narbonne, is another inside backer while there are also two edge players who signed in Kana’i Mauga from Waianae (HI) and Abdul-Malik McClain from JSerra, where he was coached by former USC OL Pat Harlow. McClain was committed to UCLA before flipping the commitment today and signing with the Trojans. Scott and Mauga will be spring enrollees.

The Trojans may not be done at linebacker either. Solomon Tuliaupupu, the high school Butkus Award winner and USA Today Defensive Player of the Year from national champion Mater Dei, is still unsigned with a lot of interest in USC, and there was also an offer today to Oregon commit Elijah Winston.

There was a lot of clarity gained for the offensive line as well, with the addition of center Justin Dedich (photo above, who will enroll early for spring) and tackle Liam Douglass, but also with the news that top offensive tackle target Jackson Carman was headed elsewhere. USC is also in the mix for Penei Sewell, who said he will wait until the February signing period, and he’s also looking at Oregon, Alabama and Utah.

The one unknown announcement that did go the Trojans way came from cornerback Chase Williams of Roosevelt, who was once a Nebraska commit but after a November official visit to USC he began to turn and it finally became official today. Williams has the kind of 6-2 size that you like in today’s Pac-12 with so many big receivers and he will have the advantage of being an early enrollee for spring ball.

Finally, the Trojans added a tailback in Markese Stepp, the former Notre Dame commit who brings 228-lb size and a downhill running style. USC running back coach Deland McCullough played in college with Stepp’s dad so a preexisting relationship is there, which certainly helped the Trojans on this one.

Among the players the Trojans are still waiting for in terms of potential spring enrollment are junior college DT Caleb Tremblay (expected to announce a choice this week during JC signing period) and safety Talanoa Hufanga, who is expected to announce his choice on Dec 28th. Others such as CB Isaac Taylor-Stuart, LB Solomon Tuliaupupu and WR Amon-Ra St. Brown are all expected to sign with their choices in February.

USC has three commits who did not sign today; DT’s Tuli Letuligasenoa and Trevor Trout, and CB Marcus Johnson.

It is anticipated that the Trojans will have somewhere in the neighborhood of 18 available rides but that number won’t be set until mid-January after NFL departures, potential transfers, etc.

“We’re still trying to feel it out. One of the things it made us do was make some decisions earlier, but we wanted to be real careful in this early period not to take numbers just for the sake of taking numbers. There’s a lot of really good football players out there still making decisions, kids who are looking to take visits in January and we had to factor that in.”

DEDICH—He made 2017 PrepStar All-American as a 2-way lineman (primarily center on offense) at Chaparral High in Temecula (Calif.). As a 2017 senior, he had 15 tackles, with 2.5 sacks, and a forced fumble on defense. As a 2016 junior, he made Cal-Hi Sports All-State Junior first team and Riverside Press-Enterprise All-Area second team. He also played soccer at Chaparral, with a 1.333 goals against average as a goalkeeper.

MAUGA—He made 2017 PrepStar All-American as a senior linebacker and tight end at Waianae (Hi.) High. As a 2016 junior, he made All-State third team. He also was on the track team (sprints, hurdles, weights, jumps) at Waianae.

DOUGLASS—He made 2017 PrepStar All-Western Region as a 2-way lineman (tackle on offense) at Harvard-Westlake School in Studio City (Calif.). As a 2017 senior, he had 16 tackles, with 4 sacks, and a forced fumble on defense. As a 2016 junior in his first year playing football, he made All-Angelus League Co-Lineman of the Year. He also was on the baseball, track and wrestling teams at Harvard-Westlake.

GAOTEOTE—He made 2017 PrepStar Dream Team and Polynesian Football Hall of Fame Polynesian High School Football Player of the Year finalist as a senior linebacker at Bishop Gorman High in Las Vegas (Nev.), when he made 80 tackles, including 20 for losses (with 3 sacks), 2 deflections, 2 forced fumbles and 3 blocked punts (he also caught a 6-yard TD pass). As a 2016 junior, he made Max Preps Junior All-American first team and USA Today All-Nevada first team while getting 68 tackles, including 11.5 for losses (with 2 sacks), 2 deflections, 1 forced fumble and 1 fumble recovery. Bishop Gorman won its second consecutive national championship. As a 2015 sophomore, he had 92 tackles, including 13.5 for losses (with 3 sacks), 1 interception, 3 deflections and 1 forced fumble as Bishop Gorman was the national champion. He spent his 2014 freshman year playing at Mililani (Hi.) High, which won the state championship. He spent his youth in American Samoa. His uncle is Ma’a Tanuvasa, who played defensive end at Hawaii (1990-92), then with the Denver Broncos (1995-2000), where he won Super Bowls XXXII and XXXIII, San Diego Chargers (2001) and Atlanta Falcons (2002). His cousin, also named Ma’a Tanuvasa, is a redshirt freshman safety at Boise State, while another cousin, Haskell Garrett, is a freshman defensive lineman at Ohio State. His name is pronounced “pa-la-EE-ae nah-OE-tae-OE-tae.”

McCLAIN—He was a linebacker and tight end at JSerra Catholic High in San Juan Capistrano (Calif.). As a 2017 senior, he had 45 tackles, including 18 sacks, 1 fumble recovery and 1 forced fumble on defense and 9 receptions for 175 yards (19.4 avg) with 1 TD on offense. He also played basketball at JSerra, averaging 8.4 points and 4.6 rebounds as a 2017 junior. Before that, he attended Santa Margarita High in Rancho Santa Margarita. As a 2016 junior there, he had 51 tackles, including 8 for a loss (with 7.5 sacks), 1 deflection, 2 forced fumbles and 1 blocked field goal. As a 2015 sophomore, he had 11 tackles, including 2 for losses.

STEPP—He made 2017 Indianapolis Star All-Central Indiana Super Team and Indianapolis Star All-City as a senior running back at Cathedral High in Indianapolis (Ind.). In 2017, he ran for 975 yards on 124 carries (7.9 avg) with 17 TDs and had 4 receptions for 24 yards (6.0 avg) despite missing 3 games with an injury. He missed most of his 2016 junior season with a hamstring injury that occurred on his first carry of the season. As a 2015 sophomore, he ran for 888 yards on 104 carries (8.5 avg) with 12 TDs and caught 3 passes for 32 yards (10.7 avg). His father, Marcus Stepp, played football at Miami (Ohio) in 1994 and 1995, where he was a teammate of current USC running backs coach Deland McCullough. His brother, Marcus Jr., is a junior outside linebacker at Saint Francis, which won the 2016 and 2017 NAIA national championships.