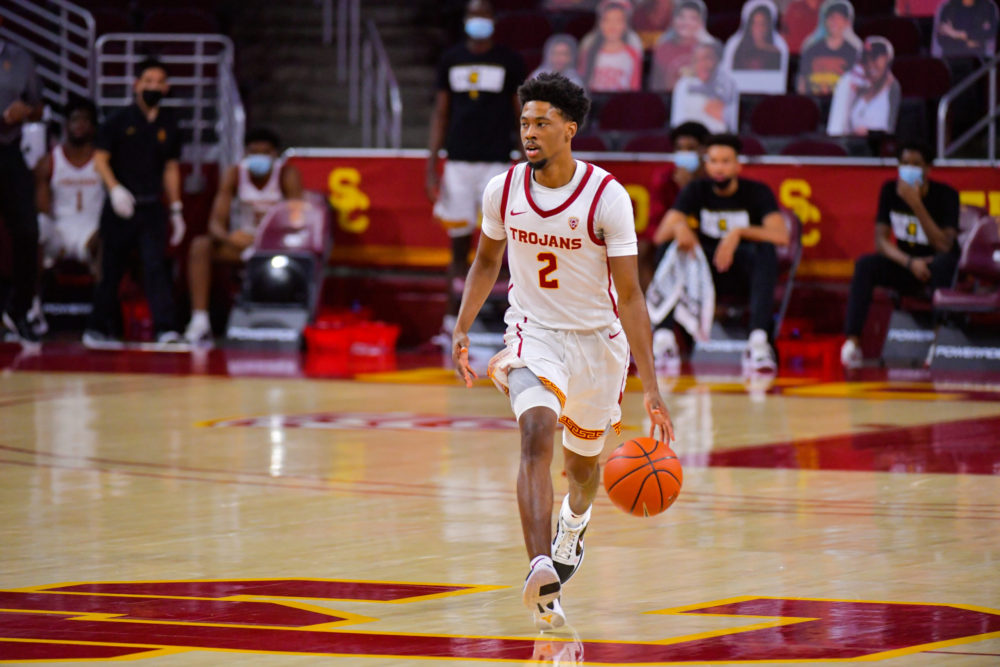 If you missed this game you missed a good one. After the loss to Arizona on Saturday the Trojans had only one day to prepare for a very good Oregon team. Turned out that was enough as the Trojans led 43-22 at the break and completed a very impressive 72-58 win.

Tahj Eaddy made three quick shots from beyond the arc and the Trojans were off and running. Oregon made a free throw at the 14:06 mark for the first Duck point after the Trojans jumped out to a 15-0 lead. The Ducks made a couple of runs in the second half but never got close. USC is now 19-4 on the season and alone at the top of the conference at 13-3 with four games left.

Isaiah Mobley strained a calf muscle in the Arizona game and was not in uniform, though he may be able to play later this week. In his absence Coach Enfield started a new lineup. Chevez Goodwin started in place of Isaiah and Ethan Anderson started in place of Drew Peterson. Explaining his decision to start Ethan Enfield said: “Drew did not play well in the last eight or nine games so we decided to start Ethan. Drew responded very well coming off the bench.” Both played big minutes.

Before the game analysts (me) thought it would be USC’s front court strength against the big and very good Oregon guards, but that’s not how it turned out. Evan Mobley and Chevez did not play many minutes together; Enfield said that the Trojans played with four guards for most of the game to have an extra ball handler on the court against the Oregon press and double teams. The plan clearly worked; Evan received a lot of attention from the Duck defense and Tahj, Drew and Ethan led the Trojans to the win.

In stretches it was hard to decide whether the offense or the defense played better. Tahj’s 21 first half points almost matched the Ducks’ 22 point output. Holding high scoring Oregon to 58 points is also a very good defensive performance. Oregon didn’t make its first field goal until the 11:59 mark, trimming the USC lead to 17-3.

Tahj Was Scorching Hot In The First Half

In the first 20 minutes Tahj made 7-10 shots including 5-7 threes and also contributed 2 rebounds and 2 assists. The Ducks started out triple teaming Evan when the ball went inside and Tahj took full advantage. He cooled down dramatically in the second half and finished with 24 points on 8-15 from the floor and 6-11 from three, along with 4 boards.

Tahj said it was a point of emphasis after the Saturday loss to bring energy at the start of the game. From the film of Saturday’s game everyone saw that they didn’t play hard enough, losing 50-50 balls and getting beat on the boards. “We were a little soft against Arizona. The regular season title is a huge focus and every game is important. We are treating it like March Madness already.”  He said that the Arizona game was a “reality check”.

Drew and Ethan Were Big On Both Ends

Drew had 9 points at the break and Ethan 5. They both played very good defense all game. This was the Drew Peterson we saw in the first half of the season. Drew made 6-12 shots including 2-4 from three for 15 points. He led the Trojans with 11 rebounds and added 4 assists. The coaching staff challenged Drew to rebound better, and his entire game picked up. Enfield said that “His defensive effort and intensity were great.”

“Coming off the bench woke me up a little bit,” Peterson said. “I had been shooting poorly and lost some confidence. When I rebound and get assists it gives me a better rhythm offensively.”

Ethan was a stat sheet stuffer against Oregon. Although he only made 2-9 shots for 6 points he was the primary ball handler especially in the second half. The smallest player on the court most of the game, he grabbed 7 rebounds and added 2 steals and 8 assists. Enfield said that the staff also challenged Ethan to rebound and he came through on both ends.

“This is what we expect from Ethan,” Enfield said, adding that Ethan gave everything he had. “He played at a high level at both ends.”

Evan Was The Big Decoy

With the Oregon defense overplaying Evan the USC guards repeatedly burned the Ducks in the first half. Oregon changed its defense in the second half and came out further in the half court and tried to trap whenever possible. The change gave Evan more opportunities in the second half and he finished with 11 points on 5-7 from the floor and 5 rebounds.

Enfield repeated what he has said after several games, though he fine tuned it a bit  He acknowledged that many fans want Evan to take more shots, but the staff does not want him to force shots that aren’t there. He added that “Evan played really great tonight. He played really hard.”

Tahj emphasized that “tonight was about showing we’re one of the best teams in the country and to let teams know we can’t be bullied.”

The Trojans Defense Was Very Good

Oregon’s top two scorers came in averaging 17 points apiece. Senior guard Chris Duarte only took eight shots and finished with 11 points. He is usually their go-to scorer. Senior forward Eugene Omoruyi only scored 8 points. The difference between their season averages and the 19 they combined against the Trojans are one way to measure the difference in the game.

Almost all of the team stats favored USC. Although the Ducks shot the ball much better in the second half they made only 23-57 (40%) shots and hit a few late threes to finish 7-17. The Trojans made half of their 54 shots and were 10-21 from three. Oregon gets to the foul line a lot but the Trojans played strong defense without fouling and Oregon only attempted nine free throws.

A look at the stat sheet shows why the Trojans won. Offensive rebounds: 15-9 in favor of the Trojans. Total rebounds: 39-25. The Trojan guards and wings dominated the boards.

Enfield And His Players Know The Importance Of This Win

Enfield readily acknowledged how big this game was: “This is a very important game for us. It’s hard to prepare for Oregon in only one day….The players did a very good job in following the scouting report.”

Asked whether the more aggressive Oregon defense in the second half was a problem, he said: “In the second half we missed some easy shots. We knew that they would go on a run eventually. When teams try to come back they often do it from the three point line.”

There were a lot of good things in this game. The Trojans won without dominating an opponent inside and without one of their key big men. Enfield shortened the rotation; Noah Baumann did not play, likely because of how well the other guards and wings played rather than a preconceived plan.

The Trojans know they lost Saturday because Arizona played with more physicality and energy and were the hungrier team. The USC players refused to let that happen again. Adjusting on the fly with Isaiah unable to go the Trojans played with more spacing and everyone went hard to the glass.

They also know that they “control our own destiny.”  Win the next four and they win the regular season title. Lose one and a number of scenarios are in play. Although I have not seen anything about how the conference will determine the regular season championship and tournament seeding with teams playing different numbers of games, Enfield said that the Trojans now own the tie breaker over Oregon. That statement suggests that winning percentage may not be the deciding factor. If that is the case, the Trojans could lose a game and if they beat the Bruins still finish on top no matter what UCOA does this week, but that is only my conjecture.

The Trojans travel to the mountain schools later in the week for what Enfield labels an always tough trip because of the altitude. Regardless the view is much better in Troyland tonight.