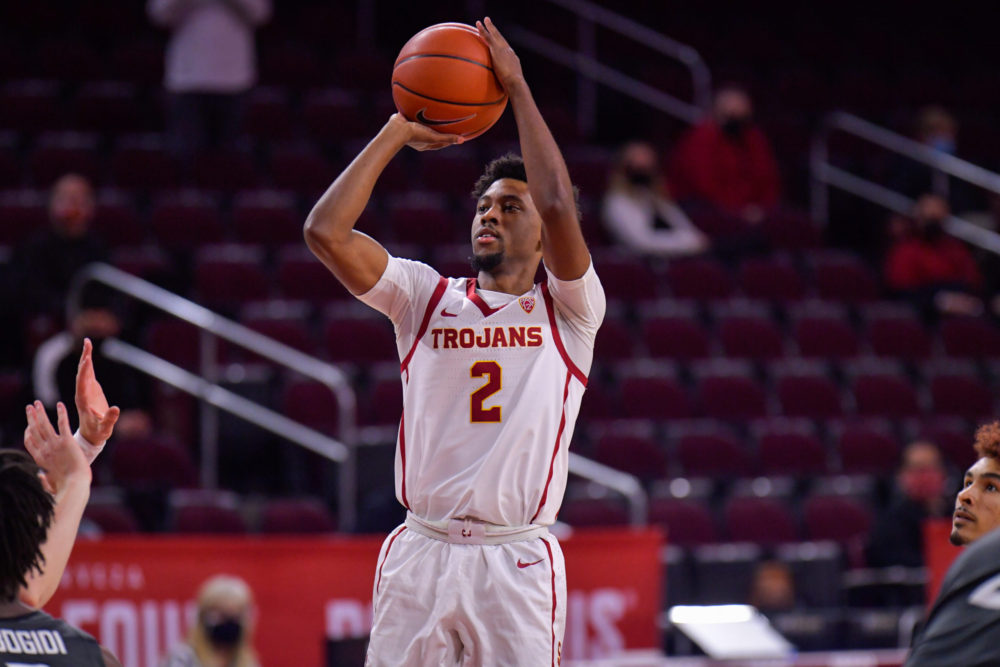 The Trojans dominated the stats but did not pull away until the final minutes to secure a 76-65 win over Washington State on Saturday night. The win moves the conference-leading Trojans to 17-3 overall and 11-2 in conference play. Earlier on Saturday, the NCAA Tournament Selection Committee released its first ranking of the top 16 seeded teams thru Friday’s games. The Trojans were not included but the chair of the committee stated that the committee took a hard look at the Trojans and Florida State. USC has now won 83 of their last 88 games in which they held their opponent to less than 70 points.

The Trojans struggled to score at times in this game and often had to rely on Evan and Tahj. Tahj accounted for 11 of the Trojans first 17 points as they jumped out to a 17-5 lead. A few minutes later the score was tied at 25; the Cougars used USC turnovers and offensive rebounds to stay in the game. At the half the Trojans led 41- 35; Tahj had 18 of USC’s first half points and Evan chipped in 8 more.

On the night Tahj scored 29 points, the highest total for any Trojan this season, and did it very efficiently on only 16 shots. He connected on ten including 2-5 threes and 7-8 from the line. Evan finished with 20 points on 7-13 from the floor and 6-9 free throws. He finished with 11 rebounds and 6 blocked shots.

The Trojan defense was very good the entire game and was especially solid in handling Cougar star guard Isaac Bonton.  Bonton took 17 shots to get his 17 points, making only 6-17 of his shots and 0-6 from three. He committed two turnovers in the first three minutes and most of his points were late and couldn’t stop the Trojan late run. All of the key stats were one sided in the Trojans’ favor but the Cougs were within two at the 4 1/2 minute mark when Coach Enfield called a timeout. He was upset that Evan had not closed out on a three point shot which trimmed the lead to two. From that point on USC played well on both ends and closed out the game.

The Offensive Numbers Greatly Favored USC, Yet They Couldn’t Pull Away Until The Final Minutes

With 49 points from Evan and Tahj the Trojans didn’t need much from anyone else and no one else scored in double figures.

A first glance at the offensive numbers would lead one to assume the game was a rout. That was not the case for several reasons. First, the Trojans turned the over 12 times in the first half leading to 15 Cougar points. USC was also called for a technical foul to add two more. Enfield said the Trojans “made up ways to commit turnovers in the first half.”

Second, the Cougars out rebounded USC on the offensive end 12-7, and the Trojans only had three more boards for the game even though the Cougars were shooting bricks most of the night. Third, points in the paint were surprisingly even at 30. When these stats are added up they result in WSU taking 15 more shots than the Trojans.

The Trojans solved the turnover problem at halftime and had only four more after the break. In stretches of the second half both teams struggled to score and though it looked several times like they would break the game open, the Trojans couldn’t pull away until very late.

The Timely Time Out

After absorbing Enfield’s message, the Trojans pulled away in the last 4 1/2 minutes. In that stretch they forced Cougar turnovers on four straight possessions. On the other end they found Evan inside for easy dunks and made a decent percentage of their late free throws.

Enfield Predicted Tahj Would Have A Big Game

During the morning shoot around Enfield told assistant Chris Capko that he thought Tahj would have a big game. Tahj was making everything and Enfield said he had a “feeling.” He admitted that his feelings are not always right.

Enfield added: “Tahj has done an amazing job.  He doesn’t turn the ball over and has a good assist to turnover ratio.”

Eight minutes into the third game of the season, Ethan Anderson was injured and Tahj had to become the lead guard.

After the UW game on Thursday, Enfield said that Tahj and Evan have been consistently good on offense and usually one or two other players have good offensive games. In this win Tahj and Evan were enough, along with a big defensive effort by everyone.

Ethan Started The Second Half In Place Of Drew Peterson

Drew has been struggling over the last three weeks.  Other than a very good ten minute stretch against Stanford he has played poorly. Drew had four TOs in the first half against the Cougs and Enfield decided to make the change. “Ethan played great basketball. He had 5 assists and played great defense.”

USC Mixed In Some Zone

Although the Trojans played man most of the game they did use a zone in stretches to give WSU a different look and the Cougars did the same thing. As it played out the switch to zone defenses didn’t appear to materially change the game either way.

Enfield Was Pleased With The Win

Enfield believes that Beasley Coliseum is a tough venue for opposing teams no matter what year. The Cougs have been playing well recently, beating UCLA earlier in the week and recently beating Oregon on the road.

He routinely says that it is hard to win PAC 12 games on the road. This year is different in empty arenas but no other team can match the Trojans’ 6-1 road record. Oregon is 4-1, and the other teams in the conference chase are 4-4 (UCLA), 5-5 (Colorado) and 5-4 (Stanford).

Evan led the Trojans against the Huskies on Thursday and it is hard to select another player with Evan’s big stat line in the WSU win. However, Tahj is this week’s POW. His 29 points are a Trojan season high and especially early in the game he was the only Trojan who was scoring. He also defended Bonton during much of the game and shut him down.

It is a good week for Trojan basketball when they play two games and Bill Walton isn’t on either broadcast. The announcers in this game didn’t always let the viewers know what had been called, but at least they stuck to basketball.

Enfield said the team would take Sunday off and he would likely begin reviewing game film on ASU on Sunday evening. The Devils are small but Enfield said they have the quickest set of guards in the league and they present defensive problems.

It’s reasonable to expect that the staff will continue to look for ways to get Drew back on his game. He was extremely valuable for the first two months and the Trojans will need the “old” Drew in some game soon. Enfield hasn’t expressly said that Drew’s shooting and turnover problems are a result of a loss of confidence or are in his head but that appears to be the case. Another thing the coaches won’t admit is that they are concerned with the number of offensive rebounds the Cougs grabbed, an issue which also appeared in some earlier games. This Trojan team is built around its size and athleticism and no team they have played should out rebound USC on the offensive end.