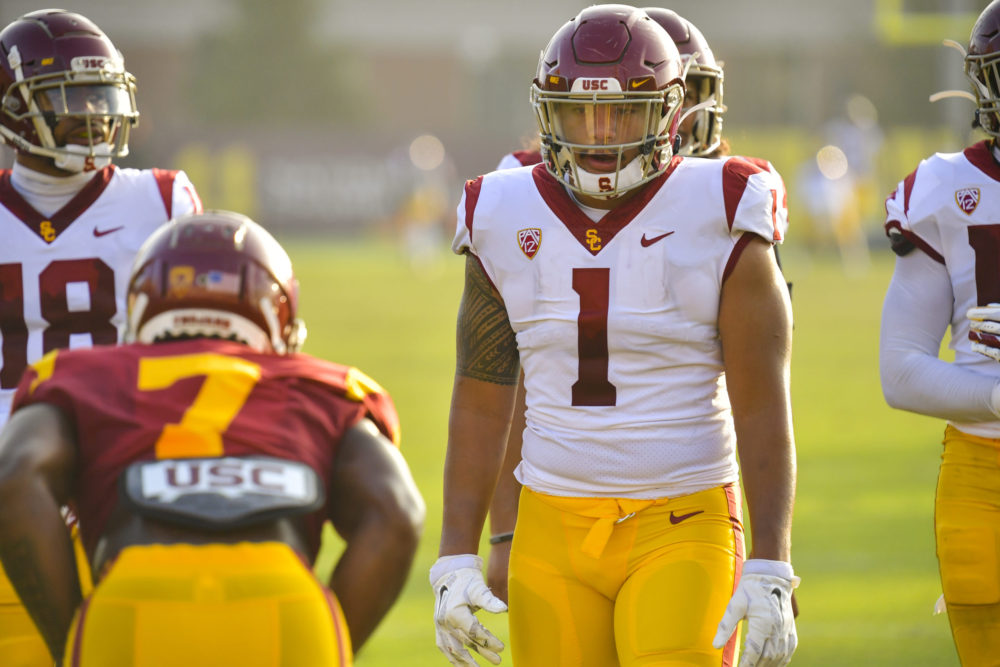 No position on the USC roster was hit harder by pre-season injuries than linebacker, as the Trojans lost both Jordan Iosefa and Solomon Tuliaupupu for the season before fall camp even opened. Those two weren’t just talented enough to provide depth this season; they were talented enough to potentially emerge as starters. But two weeks into fall camp, the Trojans look like they’ll be in good hands at the position, as veterans have impressed and young players have emerged.

The two inside positions are critical in Todd Orlando’s defensive scheme, and getting standout play from both spots could make this one of the better defenses in the conference.

That means that arguably the most important player for the Trojans on that side of the ball this season is Palaie Gaoteote, a returning starter at weakside linebacker–the Rover in Orlando’s defense. Gaoteote has been a consistent presence in the USC defense during his time with the Trojans, but he hasn’t lived all the way up to the lofty recruiting ranking he earned as a high school standout. But head coach Clay Helton has seen enough from Gaoteote under Orlando that he believes that could change this season.

“I’ve been so impressed with EA (Palaie Gaoteote) and his progress from last year to this year,” Helton said. “His maturity level, his acceptance of coaching, and hard coaching, with TO (Todd Orlando). It’s been great for him. I think TO has taken him to another level.”

Gaoteote was injured for part of last season and finished with 58 tackles in eight games. His best performance came when he turned in 14 tackles against Utah.

“He’s on another level right now,” Helton said. “He’s playing his best ball since he’s been here. I look forward to watching him on Saturdays.”

Heading into this season, Helton sees some specific areas where Gaoteote’s improvement this season will show.

“I think the biggest thing that I’ve been impressed with is his ability to now get off blocks,” Helton said. “I thought one of the things that hurt him a little bit last year was once he engaged, he stuck to those blocks. That’s something that TO works every day in his every-day drill work is to be able to create separation from those blocks and make plays–produce a tackle. And that’s what I’m seeing from him.”

Helton also praised the “unbelievable effort” with which Gaoteote is playing right now. After playing at time between 255 and 260 last year, Gaoteote is staying right at 245 this year and Helton said that’s helped to allow him to go hard contantly.

“I don’t see him taking a play off,” Helton said. “TO’s on him every day about his conditioning, his weight, how he plays, every play, and he just has this mental toughness right now and physicality right now, that he’s just taken his game to a different level.”

Next to Gaoteote, the Trojans are looking at Kana’i Mauga and Ralen Goforth at middle linebacker–the Mac linebacker in Orlando’s defense. With Mauga nursing a hamstring injury, Goforth has taken a bulk of the reps there, but Helton said they expect Mauga to return to the field soon. Helton again praised Orlando for his ability to bring along the entire position group, including those potential starters as well as second-year player Tuasivi Nomura.

“With some of the injuries that we’ve had, not going to be able to have Jordan or Solo, some youth had to step up and to see the progress of a Ralen Goforth come about has been awesome to see,” Helton said. “[Tuasivi] has had some great practices for us. We’re looking forward to getting Kana’i back. He was really flourishing until the hamstring.

“TO has really done a masterful job with those kids, but I think the guy that it has benefitted the most, in my opinion, has been EA,” Helton continued.

The Trojans also have an intriguing option in the middle in the form of Tayler Katoa–another player out nursing a hamstring issue right now. Helton said they expect him back in the “very near future.” Katoa was with USC in the spring of 2017 before electing to take a two-year mission. He returned to the Trojans this summer and Helton said he will be available for them this season.

“He’s been a welcome sight for us, especially from a depth standpoint,” Helton said. “He’s going to provide some depth at that linebacker position as well as special teams. He’s one of the older guys now. I remember him as a rookie and now you look up and he’s a full-grown man…He brings a level of maturity both on the field and off that’s very appreciated at this time, dealing with some injuries at the position.”

But where USC has the most depth is at outside linebacker, with Drake Jackson returning following a terrific true freshman season, plus Hunter Echols and Abdul-Malik McClain, who have both shown flashes of potential during their time on the field.

Right now, Jackson is out with a hamstring injury, which has given the other two significant reps during fall camp. Helton said Echols and McClain were part of the defensive rush that got to the quarterback on occasion during the first scrimmage.

“It’s a wonderful opportunity for Hunter and Malik to really put their resume on tape right now while Drake is out, and provide that trust and that confidence that TO is looking for, for them to step out on the field,” Helton said.

Once Jackson returns, those three will push each other to see the field, and Helton said that’s another spot where the coaches and players will lean into that competition to hopefully get the best out of the players and that position.

“That’s the beauty of this place,” Helton said. “Competition is a great thing and we compete every week, and it’s the guy that’s playing the best in the moment. We’re fortunate to have some talented pass rushers in those three individuals. And, we have some packages where there’s two of those bodies on the field at one time…There are packages that you’ll even see in the first game that have that. It’s important to have those quality pass rushers and [those three] are quality guys that can help us get to the quarterback and we’ll need them in that first game.”

That first game is against Arizona State and dynamic quarterback Jayden Daniels, who missed the game against USC last season but threw for 2,943 yards and 17 touchdowns against just two interceptions as a true freshman in 2019. He also added 355 yards on the ground and is a threat to buy extra time or escape the pocket with his legs.